Saint of the Day -10 January: St Peter Orseolo – Pietro I Orseolo, O.S.B. Cam. (Peter Urseolus) (928–987) Doge and Monk – was the Doge of Venice from 976 until 978. He abdicated his office and left in the middle of the night to become a monk. He later entered the Camaldolese Order.

Peter Orseolo’s life reads like a novel of adventure and intrigue, ending in the solitary wilds of the Pyrenees.  He was a Venetian nobleman and at the age of twenty became the commander of the Venetian fleet, conducting successful campaigns against the pirates who preyed on ships in the Adriatic.   He was married at eighteen and had one son. In 976, there was a popular uprising in Venice;  the doge (or chief magistrate), Peter Candiani IV, was murdered and a large part of the city was destroyed by fire.   St. Peter Orseolo was chosen to replace the murdered doge and showed himself a remarkable statesman, one of the greatest to ever rule Venice.

He not only restored the city but began reconstruction of the cathedral of St. Mark, promoted peace, built hospitals and created social programs to help widows, orphans and pilgrims.   He built a new palace for the doge and settled accounts with the murdered doge’s widow, whose suit against the city threatened to destroy it financially.

With these tasks completed, on the night of September 1, 978, he secretly left Venice and took refuge in the Benedictine monastery of Cuxa, on the borders of France and Spain.   For a long time, not even his wife and son knew his whereabouts.   He cut himself off entirely from his former life and placed himself under the direction of the abbot of the monastery.   Later, at the suggestion of St. Romuald, founder of the Camaldoli monks, whom he had met at Cuxa, he retired into even greater solitude, after providing for and with the permission of his family.   For all his brilliant success, Peter seems to have thought about the move for over ten years and he spent the rest of his life in total solitude with God.

His break with the world was the sensation of the age and was the talk of Venice for decades.   He died in 987 and his tomb became a place of pilgrimage 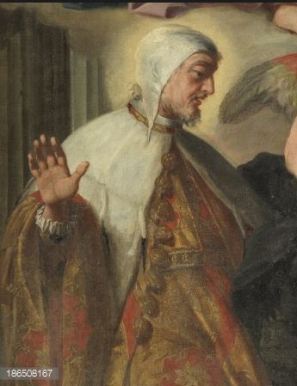