Giovanni Melchiorre Bosco; 16 August 1815– 31 January 1888 popularly known as Don Bosco was an Italian priest, educator and writer of the 19th century.   While working in Turin, where the population suffered many of the effects of industrialisation and urbanisation, he dedicated his life to the betterment and education of street children, juvenile delinquents and other disadvantaged youth.   He developed teaching methods based on love rather than punishment, a method that became known as the Salesian Preventive System.

A follower of the spirituality and philosophy of Saint Francis de Sales, Bosco was an ardent Marian devotee of the Blessed Virgin Mary under the title Mary Help of Christians.   He later dedicated his works to De Sales when he founded the Salesians of Don Bosco, based in Turin.  Together with Maria Domenica Mazzarello, he founded the Institute of the Daughters of Mary Help of Christians, a religious congregation of nuns dedicated to the care and education of poor girls.

In 1876 Bosco founded a movement of laity, the Association of Salesian Co-operators, with the same educational mission to the poor.   In 1875 he began to publish the Salesian Bulletin.   The Bulletin has remained in continuous publication and is currently published in 50 different editions and 30 languages.

Bosco established a network of organizations and centres to carry on his work. Following his beatification in 1929, he was canonised as a saint by Pope Pius XI in 1934. 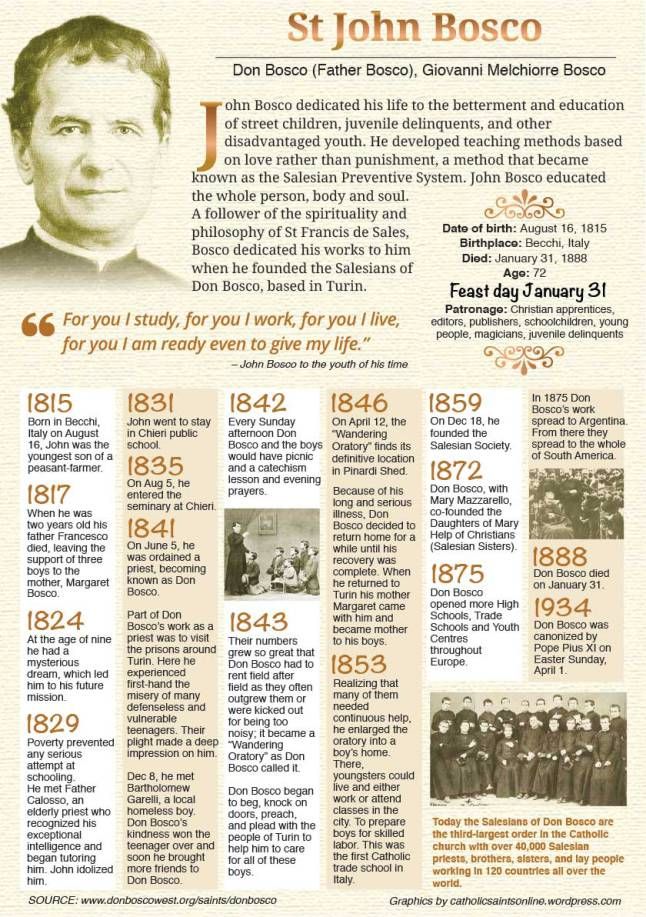 John was the youngest son of a peasant family.   His father died when John was two and the family became very poor.   As a youngster, John taught religion to other boys and got them to go to church.   His acrobatics and magic tricks fascinated them.   Encouraged by a priest, John entered the seminary wearing clothes provided by charity.

Priests at the seminary saw that John was a natural leader and encouraged him to use his gifts to keep other young people out of trouble.   John started gathering boys together on Sunday for a day in the country.   They would begin with Mass, followed by breakfast and games.   The afternoon would include a picnic, a catechism lesson and evening prayers. The group grew larger because John Bosco loved the boys.   He made each one feel important.   He had a gift for handling difficult boys.

John was able to get a house for himself and forty boys.   His mother became the housekeeper.   In the first six years the number of boys at the house grew to 150. John Bosco gave a father’s care to rowdy, neglected boys.   He is known as the “friend of boys” and is often called Don, which means Father.

Don Bosco opened workshops to train boys to be shoemakers and tailors.   He saw that in addition to getting a religious education the boys learned to play musical instruments, perform in plays and engage in sports.   He also wrote and printed books on Christian faith for boys.

At that time the state did not favour the Church and for four years men tried to assassinate John Bosco.   Once they tried to shoot him while he was teaching.   At other times they tried to poison him and attacked him on the street.   Eventually, however, because of his good work, even his enemies began to support him.

John Bosco knew God wanted him to work with boys because of a dream he had when he was young.   In this dream, boys who had been playing roughly suddenly began playing together as happily as lambs. John heard a voice saying, “Teach them right from wrong. Teach them the beauty of goodness and the ugliness of sin.”   When John told his mother about his dream, she said it might mean God wanted him to be a priest and care for some of the sheep in his flock.

John Bosco spent so much time working that people who knew him well became worried about his health.   They said he should take more time for rest and sleep.   John replied that he’d have enough time to rest in heaven. “Right now,” he said, “how can I rest? The devil doesn’t rest from his work.” 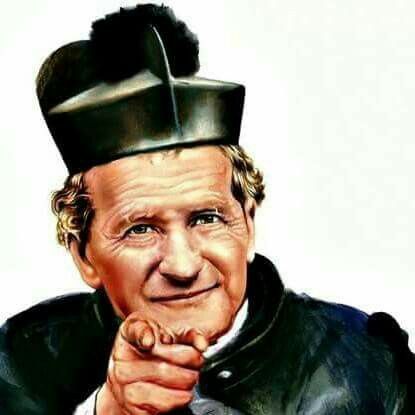