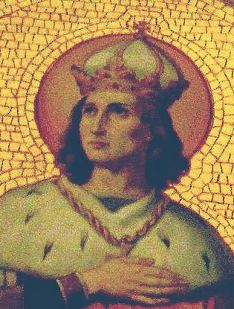 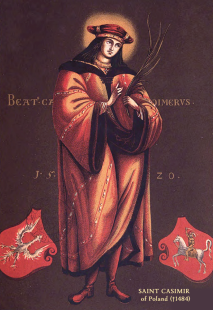 Casimir Jagiellon was born in 1458, the third of thirteen children born to Poland’s King Casimir IV and his wife Elizabeth of Austria.   He and several of his brothers studied with the priest and historian John Dlugosz, whose deep piety and political expertise influenced Casimir in his upbringing.

The young prince had a distaste for the luxury of courtly life and instead chose the way of asceticism and devotion.   He wore plain clothes with a hair shirt beneath them, slept frequently on the ground and would spend much of the night in prayer and meditation on the suffering and death of Christ.

Casimir showed his love for God through these exercises of devotion and also through his material charity to the poor.   He was known as a deeply compassionate young man who felt others’ pains acutely.

The young prince was only 13 years old when his father was asked by the Hungarians to offer his son as their new king. Casimir was eager to aid the Hungarians in their defense against the Turks and went to be crowned.   This plan was unsuccessful, however, and he was forced to return to Poland.

After his return Casimir resumed his studies with Dlugosz, while developing a canny grasp of politics by observing his father’s rule.   In 1479 the king left Poland to attend to state business in Lithuania, leaving Prince Casimir in charge of the realm between 1481 and 1483.

Advisers to the prince joined his father in trying to convince Casimir to marry.   But he preferred to remain single, focusing his life on the service of God and the good of his people.

After experiencing symptoms of tuberculosis, Casimir foresaw his death and prepared for it by deepening his devotion to God.   He died en route to Lithuania on March 4, 1484 and was buried with a copy of a Marian hymn he frequently recited. Pope Adrian VI canonized him in 1522.   After a lapse of one hundred and twenty years, his body was taken up, and found without the slightest sign of corruption.

Five centuries after his death, Pope John Paul II recalled how St. Casimir “embraced a life of celibacy, submitted himself humbly to God’s will in all things, devoted himself with tender love to the Blessed Virgin Mary and developed a fervent practice of adoring Christ present in the Blessed Sacrament.” 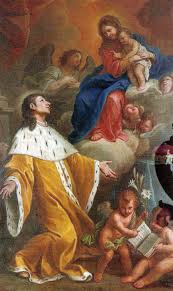