The symbolic meaning of the sacrament of baptism as sharing in Christ’s passion according to Cyril of Jerusalem, Bishop of Jerusalem in the middle of the fourth century and one of the most important sources we have for how the church celebrated the sacraments during that era.  In his Jerusalem Catechesis from which this excerpt comes, St. Cyril instructs new Christians in the days immediately before and after their initiation into the life of the Church at the Easter Vigil.

You were led down to the font of holy baptism just as Christ was taken down from the cross and placed in the tomb which is before your eyes.   Each of you was asked, “Do you believe in the name of the Father, and of the Son and of the Holy Spirit?”   You made the profession of faith that brings salvation, you were plunged into the water and three times you rose again.   This symbolized the three days Christ spent in the tomb.

As our Saviour spent three days and three nights in the depths of the earth, so your first rising from the water represented the first day and your first immersion represented the first night.   At night a man cannot see but in the day he walks in the light.   So when you were immersed in the water it was like night for you and you could not see but when you rose again it was like coming into broad daylight.   In the same instant you died and were born again; the saving water was both your tomb and your mother. 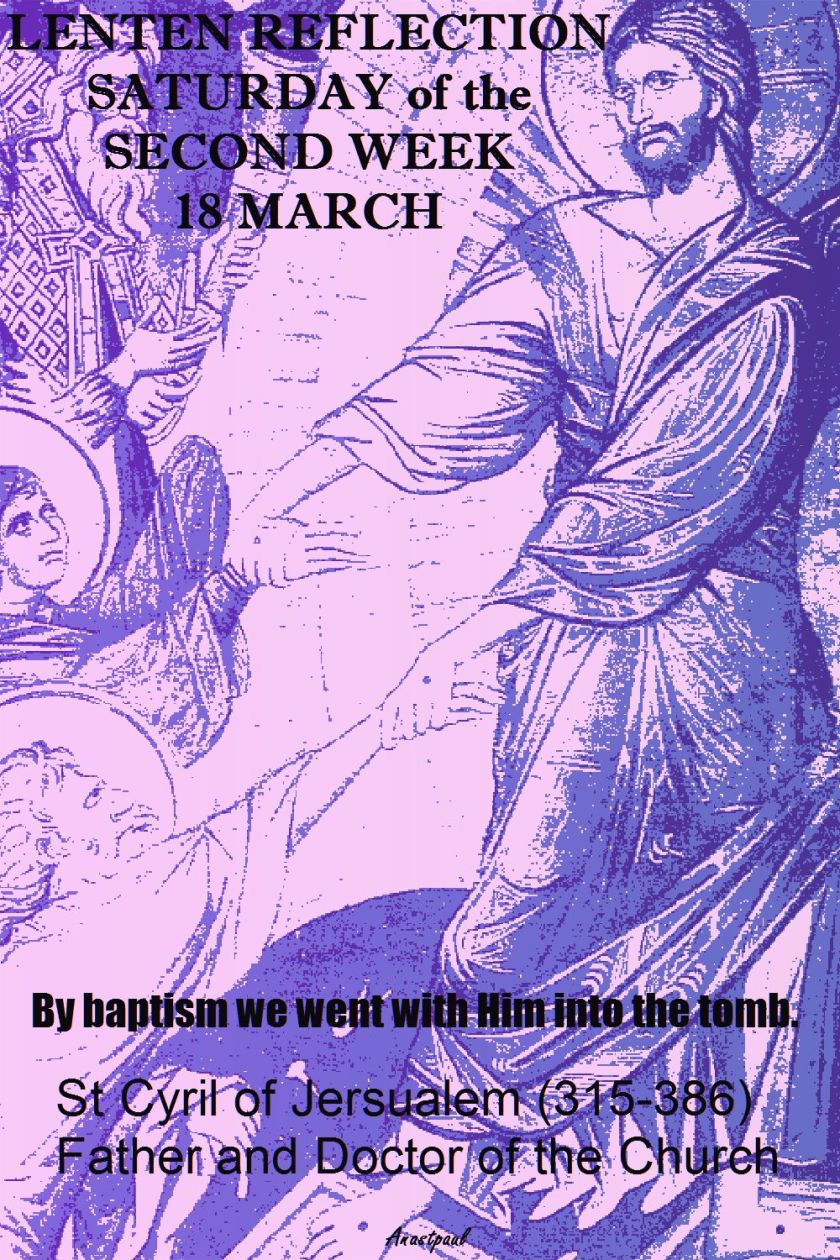 Solomon’s phrase in another context is very apposite here.   He spoke of a time to give birth and a time to die.   For you, however, it was the reverse: a time to die and a time to be born, although in fact both events took place at the same time and your birth was simultaneous with your death.

This is something amazing and unheard of!    It was not we who actually died, were buried and rose again.   We only did these things symbolically but we have been saved in actual fact.   It is Christ who was crucified, who was buried and who rose again and all this has been attributed to us.   We share in His sufferings symbolically and gain salvation in reality.   What boundless love for men!   Christ’s undefiled hands were pierced by the nails; he suffered the pain.   I experience no pain, no anguish, yet by the share that I have in his sufferings he freely grants me salvation.

Let no one imagine that baptism consists only in the forgiveness of sins and in the grace of adoption.   Our baptism is not like the baptism of John, which conferred only the forgiveness of sins.   We know perfectly well that baptism, besides washing away our sins and bringing us the gift of the Holy Spirit, is a symbol of the sufferings of Christ.   This is why Paul exclaims: Do you not know that when we were baptised into Christ Jesus we were, by that very action, sharing in his death?    By baptism we went with him into the tomb.

These words of St. Cyril of Jerusalem on the symbolic meaning of the sacrament of baptism, a symbol of Christ’s passion, are read in the Roman Catholic liturgy’s Office of Readings on the Thursday in the Octave of Easter (Cat. 21 Mystagogica 3, 1-3 PG 33. 1087-1091) with the accompanying biblical reading of I Peter 3:1-17.