The Apostle Philip was one of Christ’s first disciples, called soon after his Master’s baptism in the Jordan.    The fourth Gospel gives the following detail:  “The next day Jesus was about to leave for Galilee and He found Philip.    And Jesus said to him:  Follow Me. Now Philip was from Bethsaida, the town of Andrew and Peter.    Philip found Nathanael, and said to him:   We have found Him of whom Moses in the Law and the Prophets wrote, Jesus the Son of Joseph of Nazareth.    And Nathanael said to him:  Can anything good come out of Nazareth?    Philip said to him: Come and see” (John 1:43ff). — The Church’s Year of Grace, Pius Parsch

On Wednesday, 27 July 2011, the Turkish news agency Anadolu reported that archaeologists had unearthed a tomb that the project leader claims to be the Tomb of Saint Philip during excavations in Hierapolis close to the Turkish city Denizli.   The Italian archaeologist, Professor Francesco D’Andria stated that scientists had discovered the tomb within a newly revealed church.    He stated that the design of the Tomb and writings on its walls, definitively prove it belonged to the martyred Apostle of Jesus.

Also known as:  Jacobus Minor, James the Just, James the Less, James the Younger, James, son of Alphaeus.   James, Son of Alphaeus:  We know nothing of this man except his name and, of course, the fact that Jesus chose him to be one of the 12 pillars of the New Israel, His Church.   He is not the James of Acts, son of Clopas, “brother” of Jesus and later bishop of Jerusalem and the traditional author of the Letter of James.   James, son of Alphaeus, is also known as James the Lesser to avoid confusing him with James the son of Zebedee, also an apostle and known as James the Greater.
Patronage:   dying people, apothecaries, druggists, pharmacists, fullers, hatmakers, hatters, milliners, Uruguay, 8 cities in Italy.   Attributes:   fuller’s club, man holding a book, square rule

Today’s Mass tells us that the example of the Apostles is the most certain and direct path to heaven.    They suffered and were persecuted but they placed their confidence in God and now they rejoice in heaven.   We too must have confidence in God and not be troubled in our adversities.    In our Father’s house there are many mansions and if we follow the way indicated by Him, Christ will come at the end of our life and take us to Himself. 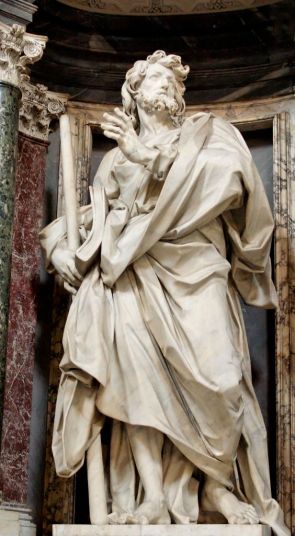 One thought on “Blessed Feast Day of Sts Philip and James, Apostles of Jesus Christ”