Celebrating St Vitus’ Memorial and the Cathedral in his honour in Prague, Czech Republic, the country for which he is a Patron.   The Image below is the Chapel of St Vitus within the Cathedral.

The cathedral was commissioned by Charles IV. Construction began in 1344 on the site of an earlier 10th century rotunda.   Its original builders, Matthias of Arras and later Peter Parler, constructed the chancel with a ring of chapels – St. Wenceslas Chapel, the Golden Portal and the lower section of the main steeple.   However, it took almost six centuries to complete, with the final phase of construction in the period 1873-1929.   Below is St Wenceslas Chapel which is decorated with frescoes and semi-precious stones.   A door in the south-western corner of the chapel leads to the Crown Chamber, in which the Bohemian Coronation Jewels are stored.

As well as being the largest and most important Basilica in Prague, St. Vitus Cathedral has also overseen the coronation of Czech kings and queens.   In the chancel of the cathedral, in front of the high altar, is the royal mausoleum.   Below this, in the crypt, there are the royal tombs. Czech kings and queens and patron saints of the country are interred here.

The Great South Tower of the Cathedral was founded in the late 14th century and reconstructed in the 16th and 18th centuries.   The tower holds the largest bell in the Czech Republic, called Zikmund, which dates from the 16th century.   Visitors can climb the Great South Tower, see the bell partway up and enjoy spectacular views over the city from the top.   The tower has 287 narrow, winding steps and is more than 90 metres high. 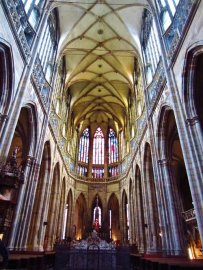 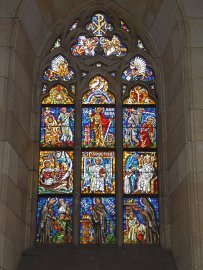 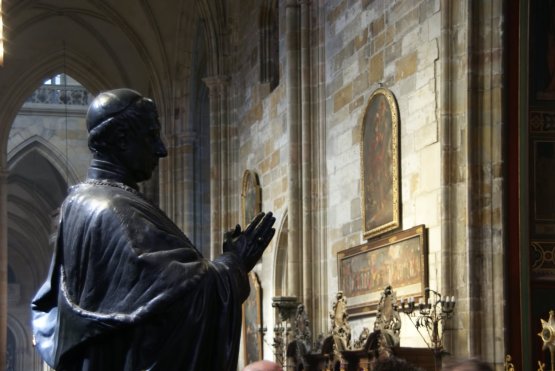 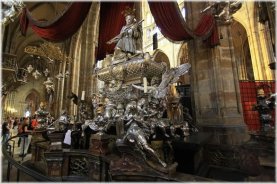 2 thoughts on “Celebrating St Vitus’ Memorial and the Cathedral in his honour in Prague, Czech Republic, the country for which he is a Patron”