Saint of the Day – 22 October – St Pope John Paul II (1920-2005) Pope, Philosopher, Theologian, Writer, Preacher, Professor and Teacher, Apostle of the Holy Eucharist, Eucharistic Adoration, Charity and Mercy.   Patronages – Archdiocese of Kraków, World Youth Day (Co-Patron). World Meeting of Families 2015 (Co-Patron), Young Catholics, Families, Świdnica.   St John Paul was the second longest-serving pope in modern history after Pope Pius IX, who served for nearly 32 years from 1846 to 1878.   Born in Poland, John Paul II was the first non-Italian pope since the Dutch Pope Adrian VI, who served from 1522 to 1523.   John Paul II’s cause for canonisation commenced in 2005 one month after his death with the traditional five-year waiting period waived.   On 19 December 2009, John Paul II was proclaimed Venerable by his successor Pope Benedict XVI and was beatified on 1 May 2011 (Divine Mercy Sunday) after the Congregation for the Causes of Saints attributed one miracle to his intercession, the healing of a French nun from Parkinson’s disease.   A second miracle attributed to John Paul II’s intercession was approved on 2 July 2013 and confirmed by Pope Francis two days later (two miracles must be attributed to a person’s intercession to be declared a saint).   John Paul II was canonised on 27 April 2014 (again Divine Mercy Sunday), together with Pope John XXIII.   On 11 September 2014, Pope Francis added John Paul II’s optional memorial feast day to the worldwide General Roman Calendar of saints, in response to worldwide requests.   It is traditional to celebrate saints’ feast days on the anniversary of their deaths but that of John Paul II (22 October) is celebrated on the anniversary of his papal inauguration. 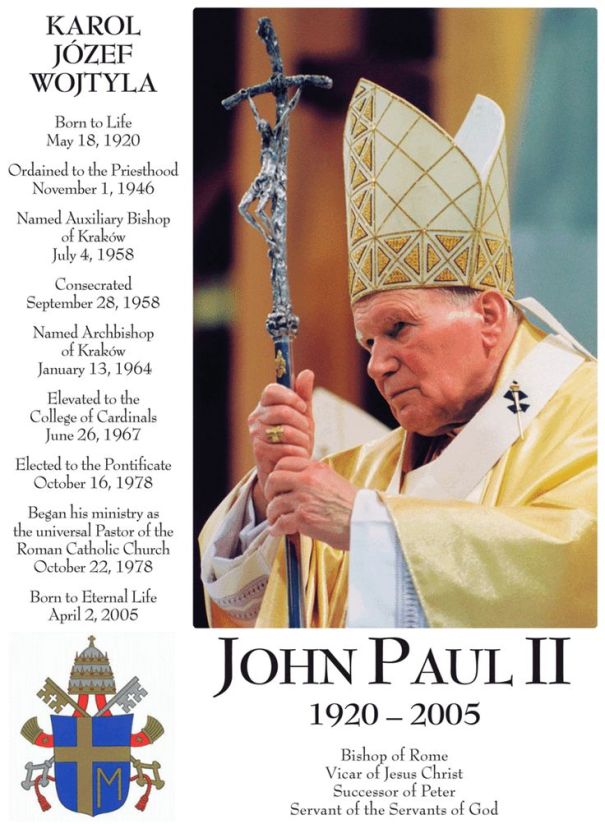 He was the third of three children born to Karol Wojtyła and Emilia
Kaczorowska, who died in 1929. His elder brother Edmund, a
physician, died in 1932, and his father, Karol, a non-commissioned
officer in the army, died in 1941.

He was nine years old when he received his First Communion and
eighteen when he received the Sacrament of Confirmation.   After
completing high school in Wadowice, he enrolled in the Jagellonian
University of Krakow in 1938.

When the occupying Nazi forces closed the University in 1939,
Karol worked (1940-1944) in a quarry and then in the Solvay
chemical factory to earn a living and to avoid deportation to Germany.

Feeling called to the priesthood, he began his studies in 1942 in
the clandestine major seminary of Krakow, directed by the Archbishop
Adam Stefan Sapieha.   During that time, he was one of the organisers
of the “Rhapsodic Theatre”, which was also clandestine.

After the war, Karol continued his studies in the major seminary,
newly reopened and in the school of theology at the Jagellonian
University, until his priestly ordination in Krakow on 1 November
1946.   Father Wojtyła was then sent by Cardinal Sapieha to Rome,
where he attained a doctorate in theology (1948).   He wrote his
dissertation on faith as understood in the works of Saint John of
the Cross.   While a student in Rome, he spent his vacations
exercising pastoral ministry among Polish emigrants in France,
Belgium and Holland.

Undated filer of the young Karol Wojtyla, who later became Pope John Paul II. Pope John Paul II is not in a coma but is beginning to lose consciousness and his general condition remains “critical”, Vatican spokesman Joaquin Navarro-Valls said Saturday, 02 April 2005. The spokesman also appeared to confirm concerns that the 84-year-old pope was nearing the end. EPA/STF (B/W only) +++(c) dpa – Bildfunk+++ 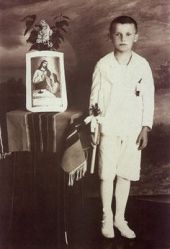 In 1948, Father Wojtyła returned to Poland and was appointed a
curate in the parish church of Niegowić, near Krakow, and later at
Saint Florian in the city.   He was a university chaplain until 1951,
when he again undertook studies in philosophy and theology.   In
1953, Father Wojtyła presented a dissertation at the Jagellonian
University of Krakow on the possibility of grounding a Christian
ethic on the ethical system developed by Max Scheler.   Later he
became professor of moral theology and ethics in the major
seminary of Krakow and in the theology faculty of Lublin.

On 13 January 1964, Pope Paul VI appointed Bishop Wojtyła as
Archbishop of Krakow and subsequently, on 26 June 1967, created
him a Cardinal.

Bishop Wojtyła took part in the Second Vatican Council (1962-
1965) and made a significant contribution to the drafting of the
Constitution Gaudium et Spes.   He also took part in the five assemblies
of the Synod of Bishops prior to the start of his Pontificate.

On 16 October 1978, Cardinal Wojtyła was elected Pope and on 22
October he began his ministry as universal Pastor of the Church.

Pope John Paul II made 146 pastoral visits in Italy and, as the Bishop
of Rome, he visited 317 of the current 322 Roman parishes.   His
international apostolic journeys numbered 104 and were expressions
of the constant pastoral solicitude of the Successor of Peter for
all the Churches.

His principal documents include 14 Encyclicals, 15 Apostolic
Exhortations, 11 Apostolic Constitutions and 45 Apostolic Letters.
He also wrote five books:   Crossing the Threshold of Hope (October
1994); Gift and Mystery:   On the Fiftieth Anniversary of My Priestly
Ordination (November 1996);   Roman Triptych, meditations in
poetry (March 2003);   Rise, Let Us Be on Our Way (May 2004)
and Memory and Identity (February 2005).

Pope John Paul II celebrated 147 beatifications, during which he
proclaimed 1,338 blesseds and 51 canonisations, for a total of 482
saints.   He called 9 consistories, in which he created 231 Cardinals
(plus one in pectore).   He also presided at 6 plenary meetings of the
College of Cardinals.

On 3 May 1981, an attempt was made on Pope John Paul II’s life
in Saint Peter’s Square.   Saved by the maternal hand of the Mother
of God, following a lengthy stay in the hospital, he forgave the
attempted assassin and, aware of having received a great gift,
intensified his pastoral commitments with heroic generosity. 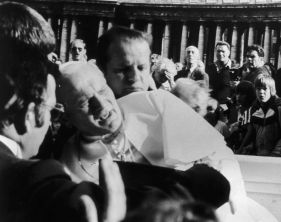 Pope John Paul II also demonstrated his pastoral concern by
erecting numerous dioceses and ecclesiastical circumscriptions,
and by promulgating Codes of Canon Law for the Latin and the
Oriental Churches, as well as the Catechism of the Catholic Church.
He proclaimed the Year of Redemption, the Marian Year and the
Year of the Eucharist as well as the Great Jubilee Year of 2000,
in order to provide the People of God with particularly intense spiritual
experiences. He also attracted young people by beginning the
celebration of World Youth Day.

No other Pope met as many people as Pope John Paul II. More
than 17.6 million pilgrims attended his Wednesday General Audiences
(which numbered over 1,160). This does not include any of
the other special audiences and religious ceremonies (more than 8
million pilgrims in the Great Jubilee Year of 2000 alone). He met
millions of the faithful in the course of his pastoral visits in Italy
and throughout the world. He also received numerous government
officials in audience, including 38 official visits and 738 audiences
and meetings with Heads of State, as well as 246 audiences and
meetings with Prime Ministers. 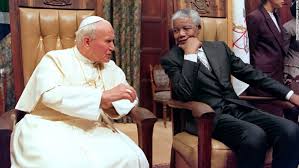 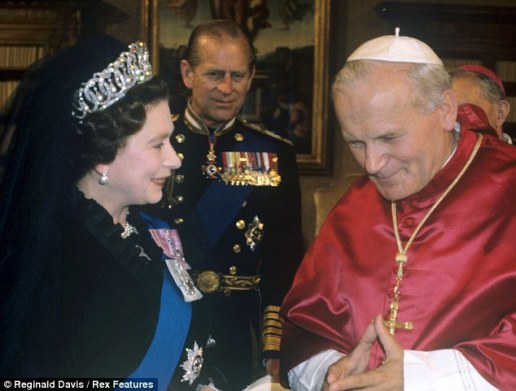 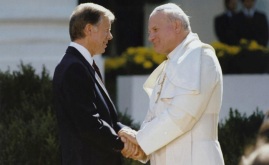 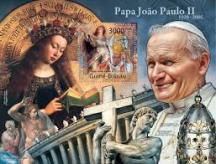 Pope John Paul II died in the Apostolic Palace at 9:37 p.m. on
Saturday, 2 April 2005, the vigil of Sunday in albis or Divine Mercy
Sunday, which he had instituted. On 8 April, his solemn funeral
was celebrated in Saint Peter’s Square and he was buried in the
crypt of Saint Peter’s Basilica.

Pope Francis prays in front of the tomb of the late Blessed John Paul II in St. Peter’s Basilica at the Vatican April 2, the eighth anniversary of his death. (CNS photo/L’Osservatore Romano via Reuters) (April 2, 2013)

John Paul II was beatified in Saint Peter’s Square on 1 May 2011 by
Pope Benedict XVI, his immediate successor and for many years
his valued collaborator as Prefect for the Congregation for the
Doctrine of the Faith and canonised on 27 April 2014, together
with Pope John XXIII, by Pope Francis. 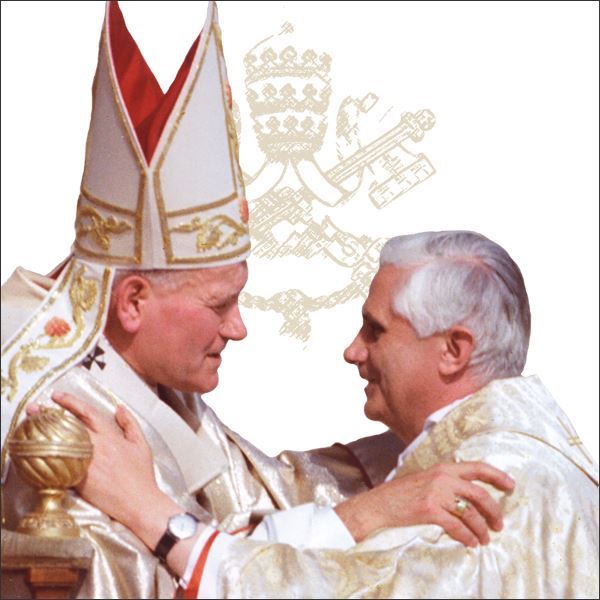 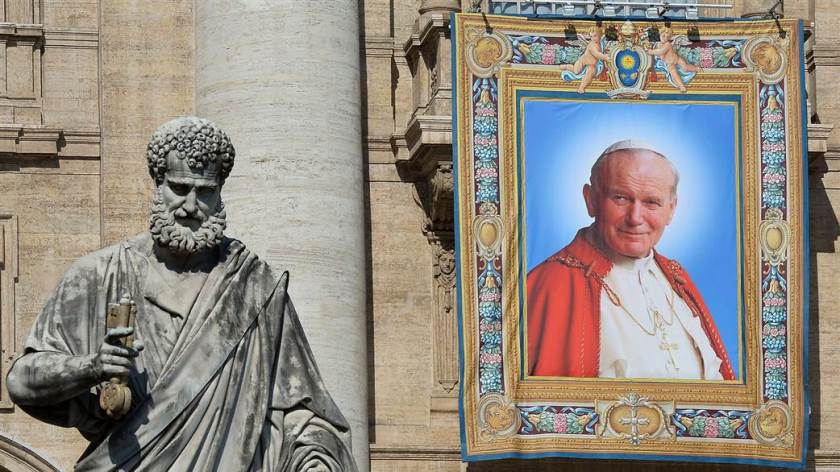 Booklet for the Celebration of the Canonization of Blesseds John XXIII and John Paul II, 27 April 2014 from the Vatican