“In the context of the Jubilee Year, it is with deep joy that I have declared blessed two Popes, Pius IX and John XXIII and three other servants of the Gospel in the ministry and the consecrated life:   Archbishop Tommaso Reggio of Genoa, the diocesan priest William Joseph Chaminade and the Benedictine monk Columba Marmion.

Five different personalities, each with his own features and his own mission, all linked by a longing for holiness.   It is precisely their holiness that we recognise today:  holiness that is a profound and transforming relationship with God, built up and lived in the daily effort to fulfil his will.   Holiness lives in history and no saint has escaped the limits and conditioning which are part of our human nature.   In beatifying one of her sons, the Church does not celebrate the specific historical decisions he may have made but rather points to him as someone to be imitated and venerated because of his virtues, in praise of the divine grace which shines resplendently in him.

Listening to the words of the Gospel acclamation:  “Lord, lead me on a straight road”, our thoughts naturally turn to the human and religious life of Pope Pius IX, Giovanni Maria Mastai Ferretti.   Amid the turbulent events of his time, he was an example of unconditional fidelity to the immutable deposit of revealed truths.   Faithful to the duties of his ministry in every circumstance, he always knew how to give absolute primacy to God and to spiritual values.   His lengthy pontificate was not at all easy and he had much to suffer in fulfilling his mission of service to the Gospel.   He was much loved but also hated and slandered.

However, it was precisely in these conflicts that the light of his virtues shone most brightly:   these prolonged sufferings tempered his trust in divine Providence, whose sovereign lordship over human events he never doubted.   This was the source of Pius IX’s deep serenity, even amid the misunderstandings and attacks of so many hostile people.   He liked to say to those close to him:  “In human affairs we must be content to do the best we can and then abandon ourselves to Providence, which will heal our human faults and shortcomings”.

Sustained by this deep conviction, he called the First Vatican Ecumenical Council, which clarified with magisterial authority certain questions disputed at the time, and confirmed the harmony of faith and reason.   During his moments of trial Pius IX found support in Mary, to whom he was very devoted. In proclaiming the dogma of the Immaculate Conception, he reminded everyone that in the storms of human life the light of Christ shines brightly in the Blessed Virgin and is more powerful than sin and death.

Let us confidently ask the new blesseds, Pius IX, John XXIII, Tommaso Reggio, William Joseph Chaminade and Columba Marmion, to help us live in ever greater conformity to the Spirit of Christ. May their love of God and neighbour illumine our steps at this dawn of the third millennium!” – St Pope John Paul II – Beatification Homily, Sunday 3 September 2000

Meanwhile, although “prisoner” he may now have been, Pius IX’s popularity nevertheless soared, abetted by technological innovations that carried the words and images of the pope to Catholics around the world, while also carrying a growing number of pilgrims to Rome to see and pray with him in person.   By the time of his death this helped make him what historian Eamon Duffy calls “a popular icon.”
But so, above all, did the goodness and charm of the man himself.   Even his critics, Duffy writes, “admitted that it was impossible to dislike him.”

“He was genial, unpretentious, wreathed in clouds of snuff, always laughing.   His sense of the absurd sometimes got the better of him, as when some earnest Anglican clergymen begged his blessing and he teasingly pronounced over them the prayer for the blessing of incense, ‘May you be blessed by him in whose honour you are to be burned.’”

People aren’t beatified for having a sense of humour, but with Pius IX it surely didn’t hurt. 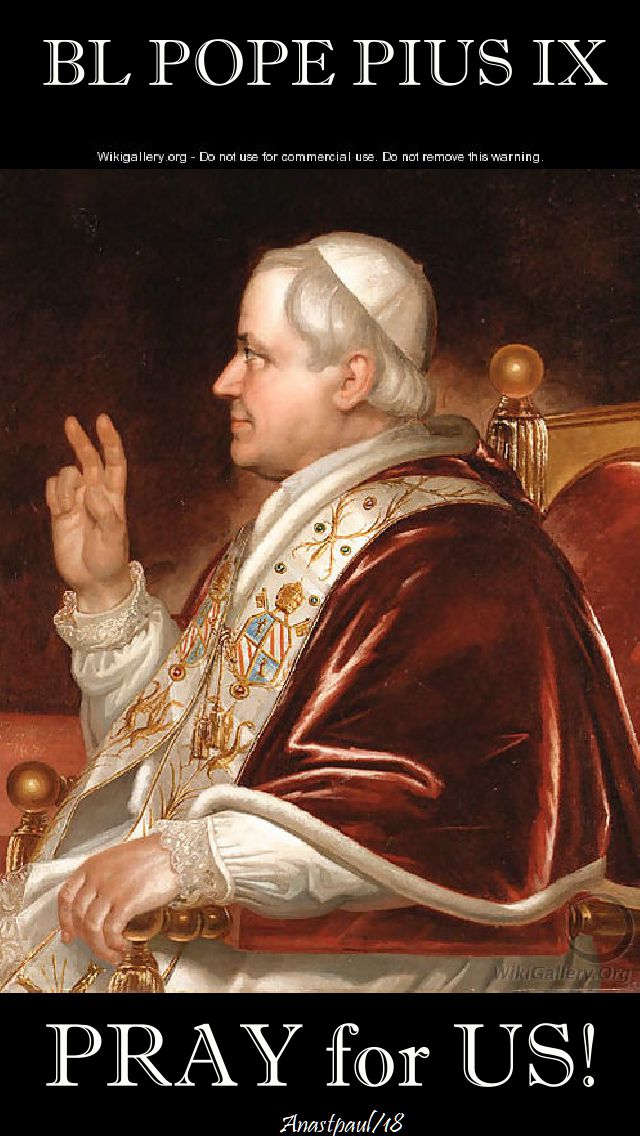