“Be Lifted Up, O Ancient Door”

It seems as the human world has no doors opening toward God.   It is locked in upon itself. It is a prison, a house of the dead.
People of the Old Testament and of other early civilizations initially applied the idea of the prison only to the world of the dead – the man who dies will not return.   They imagined the underworld as a vast dark prison in which death reigns, a ruthless tyrant. It is a place of no return.   Gradually, however, the feeling grew that, if all our paths lead to the prison which has entrances but no exit, then we are all prisoners.   In that case, even this present world is a house of the dead, the antechamber leading to a dungeon of horrors!   And it is a fact, if death has the last world – the world is a waiting room leading to the void (as manifested in many Eastern religions – my note).
Poets of our century have set down this feeling in terrifying visions.   The Jewish poet Franz Kafka has probably gone farthest into this abyss of ANGST.   His portrayal of a world of totalitarian control is intended as an interpretation of human life as such. In “The Castle”, life appears to be a futile waiting, a doomed attempt to penetrate the maze of bureaucracy and reach some competent authority and hence freedom.   In “The Trial”, life itself is present as a trial ending in execution.   The story ends with the parable of a man who waits all his life outside a door and cannot get in, in spite of the fact that it was made especially for him.
If Christ is not risen, there is nothing more to be said about man than this – all else, is merely an endeavour to deaden the pain.   The cries of despair we hear and the cruel attempts at liberation we see, are the necessary consequences of a world that will not accept Christ, its hope.
“Be lifted up, O ancient doors!” – these words of the psalm (24:7) are not liturgical symbolism, the gate liturgy of a long-past age.   They are the cry of man in a world that is far too narrow, even if he can travel in spaceships to the moon and beyond.
Christmas is only the first half of the Christian answer to this cry.   Christmas tells us that there is not only the tyrant, Death – there is God, who is Life and this God can and will reach us – He has broken a way into us.   He has found the door that was big enough for Him, or rather, He has made such a door for Himself.
But this answer is only complete if there is not only an entrance by which God can reach us but also an exit for us.   It is only satisfying, if death is no longer a prison from which no-one returns.   AND THIS IS THE CONTENT OF THE MESSAGE OF EASTER.   Not only is there a door in, there is also, a door out.   Death is no longer a house with no exits, a place of no return.
The ancient Church saw in this verse (ps 24:7) an interpretation of the article of faith “descended into hell”, referring particularly to Holy Saturday, not as a word of mourning but as a word of victory.   The Church expressed this word in poetic form – the bolts of death’s dungeon, of the world’s dungeon, are wrenched off – the ramparts are thrown down – the gates are torn from their hinges.   The one who has done this, Jesus, takes the long-imprisoned Adam and Eve, i.e. humanity, by the hand and leads them to freedom. Life is not a waiting room leading to the void but the beginning of eternity!   The world is not the universal concentration camp but the garden of hope!   Life is not the futile search for meaning, mirrored in the tangle of bureaucracy.   God is not a bureaucrat – He does not live in a distant castle, nor does He hide Himself behind impenetrable anterooms.   The door is open – it is called Jesus Christ! 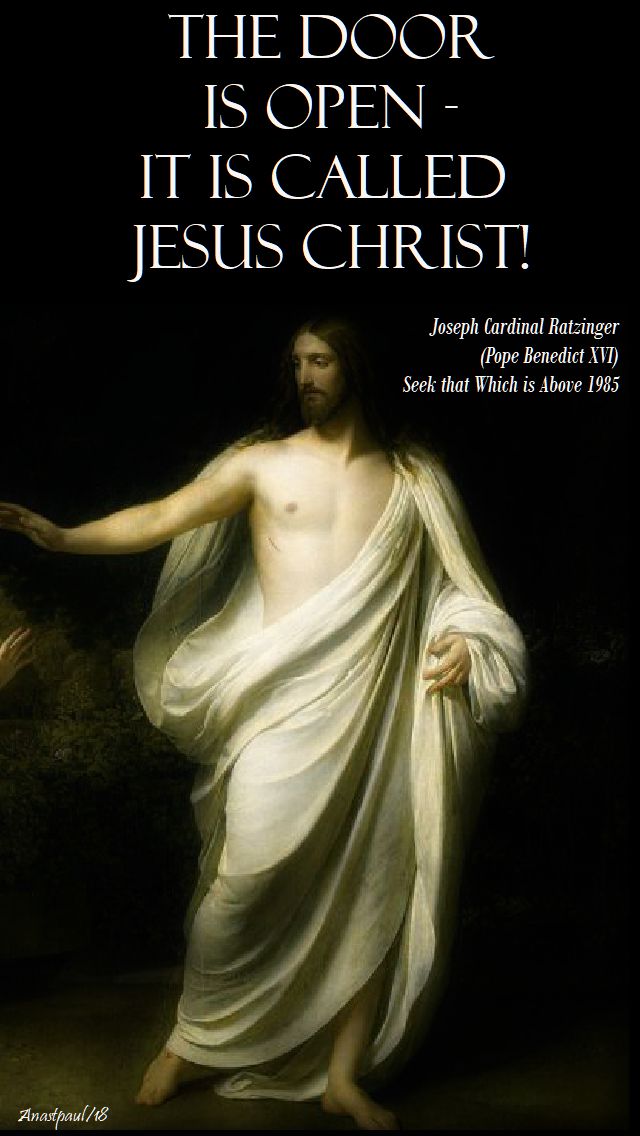 The celebration of Easter is intended to show us the radiant light which streams from this door.   It challenges us steadfastly to follow this radiance, which is no will-o’-the-wisp but the brilliance of saving truth….Joseph Cardinal Ratzinger (Pope Benedict XVI) Seek that Which is Above 1985