Saint of the Day – 2 May – St Athanasius (c295-373) – Father and Doctor of the Church – “Father of Orthodoxy”.   St Athanasius, Bishop of Alexandria and a great defender of the orthodox faith, throughout his life opposed the Arian heresy.   By denying the Godhead of the Word, the Arians turned Christ into a mere man, only higher in grace than others in the eyes of God.   St Athanasius took part in the Council of Nicea in 325 and until the end remained a champion of the faith, as it was defined by the Council.   In him the Church venerates one of her great Doctors.   He was subjected to persecutions for upholding the true teaching concerning the person of Christ and was sent into exile from his see no less than five times.   He died at Alexandria in 373 after an episcopate of forty-six years. 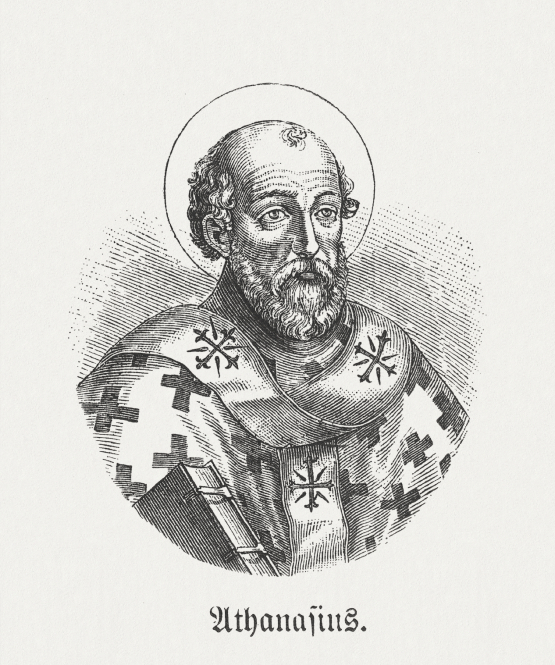 St Athanasius a true champion of orthodoxy!   He did not die a martyr but his life was martyrdom in the truest sense.   Athanasius was the Church’s greatest hero in the battle against Arianism.   Even as a young deacon at the Council of Nicea (325), he was recognised as “Arius’ ablest enemy” and the foremost defender of the Church’s faith. After the death of his bishop (328), “the entire Catholic congregation with one accord, as one soul and body, voiced the wish of the dying bishop Alexander that Athanasius should succeed him. Everyone esteemed him as a virtuous, holy man, an ascetic, a true bishop.”

There followed fifty years of constant conflict.   Under five emperors and by exile on five different occasions, he gave testimony to the truth of the Catholic position.   His allegiance to the Church never wavered, his courage never weakened.   As consolation in the face of horrendous calumnies and cruel persecution, Athanasius looked to the unwavering love of his Catholic people.   Even time brought no mitigation in Arian hatred.   For five years he hid in a deep, dry cistern to be safe from their raging wrath and their attempts to assassinate him.   The place was known only to one trusted friend who secretly supplied necessary food.

That Athanasius enjoyed God’s special protection should have been obvious to all.   On one occasion when the emperor’s assassins were pursuing him, Athanasius ordered the ship on which he was fleeing to double-back and sail upstream so that he might meet and by-pass his persecutors.   Not recognising the boat upon meeting in semi-darkness, they naively asked whether the ship carrying Athanasius was still far ahead.   Calmly and truthfully Athanasius himself called back, “He is not far from here.”   So his persecutors kept sailing on in the same direction, allowing the saint to complete his escape.

Preserved by divine Providence through a lifetime of trial and danger, he finally died in his own quarters at Alexandria during the reign of the Emperor Valens (373).   Athanasius enriched Christian literature with many important works, some pointed toward piety and edification, others polemical and dogmatic in nature.   He ruled the Church of Alexandria for forty-six years…..Excerpted from The Church’s Year of Grace, Pius Parsch 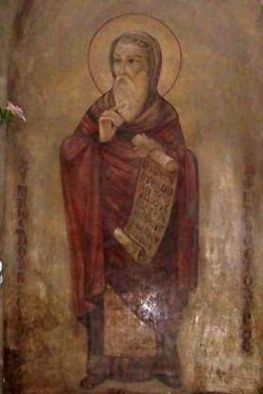 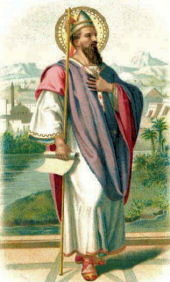 What Did St. Athanasius Write? – Among several works, St Athanasius’ two most important apologetics-related books are On the Incarnation and Letters of St Athanasius Concerning the Holy Spirit.   The first book has become a theological classic in which Athanasius explains and defends the doctrine of the Incarnation (Jesus was God in human flesh).   In the second work, he both critiques the heretical view that the Holy Spirit is a mere creature and sets forth the orthodox view that the Spirit of God is a full divine person like the Father and the Son.

What Did St. Athanasius Believe? –  Athanasius’ three most important ideas or arguments for historic Christianity are the following:
St Athanasius affirmed Nicene orthodoxy and argued that the Son (Jesus Christ) is homoousios (of the “same substance”) with God the Father.
St. Athanasius tied the Incarnation and atonement together in his theological reasoning. He is known for formulating the following theological argument:
Only God can save people from sin.
Jesus Christ saves people from sin.
Therefore, Jesus Christ is God.
At a time when the Arian heresy was at its most influential, the bishops who sided with Arianism taunted Athanasius with the words “The world is against you Athanasius.”   But Athanasius defiantly responded:  “Athanasius contra mundum.” (“No. It’s Athanasius against the world.”)   While Arianism insisted that the Son was a mere creature, Athanasius argued for Christ’s full deity.

Bl John Henry Newman described him as a “principal instrument, after the Apostles, by which the sacred truths of Christianity have been conveyed and secured to the world”. [Letters..]