Saint of the Day – 21 June – St Aloysius de Gonzaga S.J. (1568-1591) Jesuit Seminarian, Mystic, Marian devotee, Apostle of Charity – born as Luigi de Gonzaga on 9 March 1568 in the family castle of Castiglione delle Stivieri in Montua, Lombardy, Italy and died on 21 June 1591 at Rome, Italy of plague, fever and desire to see God.   His relics are entombed under the altar of Saint Ignatius Church, Rome.  Patronages – Catholic youth, Jesuit scholastics, the blind, eye ailments, AIDS patients, care-givers, Jesuit students, for relief from pestilence, young people, Castiglione delle Stiviere, Italy, Valmonte, Italy.   His attributes are a lily, referring to innocence;  a cross, referring to piety and sacrifice;  a skull, referring to his early death;  and a rosary, referring to his devotion to the Blessed Virgin Mary. 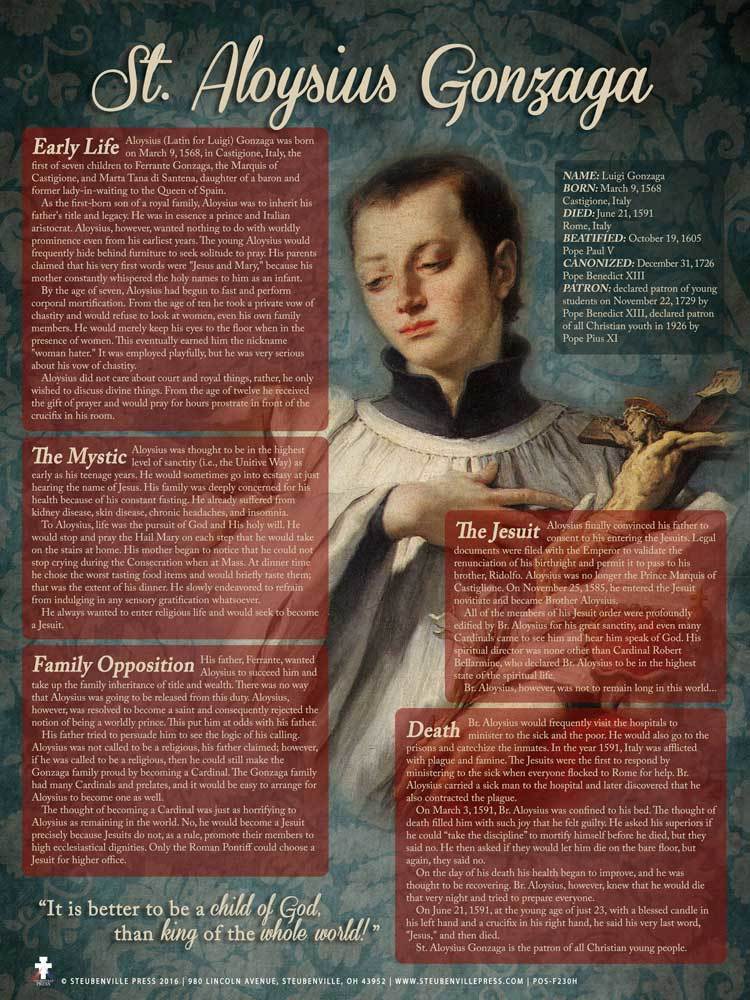 Aloysius de Gonzaga was born the eldest of seven children, at his family’s castle in Castiglione delle Stiviere, between Brescia and Mantua in northern Italy in what was then part of the Duchy of Mantua, into the illustrious House of Gonzaga.   “Aloysius” is the Latin form of Aloysius de Gonzaga’s given name in Italian, Luigi.   He was the son of Ferrante de Gonzaga (1544–1586), Marquis of Castiglione, and Marta Tana di Santena, daughter of a baron of the Piedmontese Della Rovere family.   His mother was a lady-in-waiting to Isabel, the wife of Philip II of Spain. 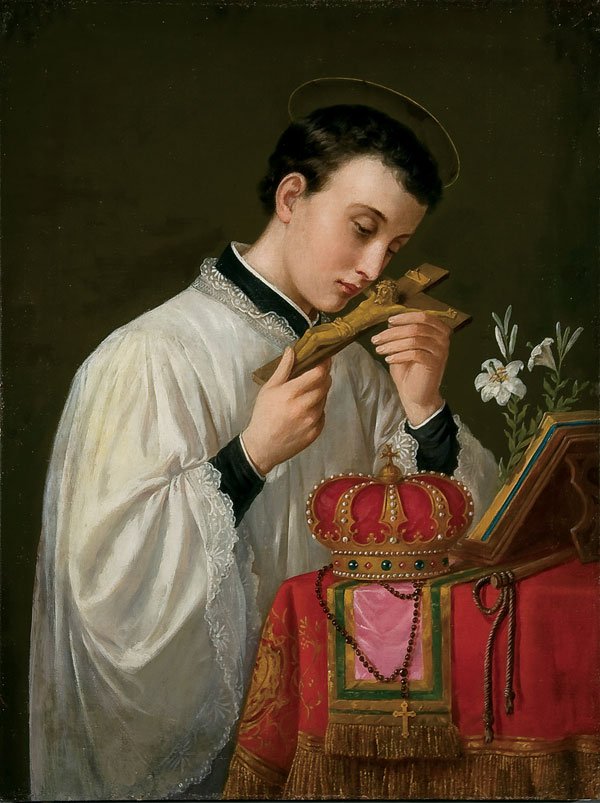 As the first-born son, he was in line to inherit his father’s title and status of Marquis.   His father assumed that Aloysius would become a soldier, as that was the norm for sons of the aristocracy and the family was often involved in the minor wars of the period.   His military training started at an early age but he also received an education in languages and the arts.   As early as age four, Luigi was given a set of miniature guns and accompanied his father on training expeditions so that the boy might learn “the art of arms.”   At age five, Aloysius was sent to a military camp to get started on his training. His father was pleased to see his son marching around camp at the head of a platoon of soldiers.   His mother and his tutor were less pleased with the vocabulary he picked up there.

He grew up amid the violence and brutality of Renaissance Italy and witnessed the murder of two of his brothers.   In 1576, at age 8, he was sent to Florence along with his younger brother, Rodolfo, to serve at the court of the Grand Duke Francesco I de’ Medici and to receive further education.   While there, he fell ill with a disease of the kidneys, which troubled him throughout his life.   While he was ill, he took the opportunity to read about the saints and to spend much of his time in prayer.   He is said to have taken a private vow of chastity at age 9.    In November 1579, the brothers were sent to the Duke of Mantua.   Aloysius was shocked by the violent and frivolous lifestyle he encountered there.

Aloysius returned to Castiglione where he met St Cardinal Charles Borromeo (1538-1584 – feast day 4 November) and from him received First Communion on 22 July 1580.   After reading a book about Jesuit missionaries in India, Aloysius felt strongly that he wanted to become a missionary.   He started practising by teaching catechism classes to young boys in Castiglione in the summers.   He also repeatedly visited the houses of the Capuchin friars and the Barnabites located in Casale Monferrato, the capital of the Gonzaga-ruled Duchy of Montferrat where the family spent the winter.   He also adopted an ascetic lifestyle.

The family was called to Spain in 1581 to assist the Holy Roman Empress Maria of Austria.   They arrived in Madrid in March 1582, where Aloysius and Rodolfo became pages for the young Infante Diego.   Aloysius started thinking in earnest about joining a religious order.   He had considered joining the Capuchins but he had a Jesuit confessor in Madrid and decided instead to join that order.   His mother agreed to his request but his father was furious and prevented him from doing so.

In July 1584, a year and a half after the Infante’s death, the family returned to Italy. Aloysius still wanted to become a priest but several members of his family worked hard to persuade him to change his mind.   When they realised there was no way to make him give up his plan, they tried to persuade him to become a secular priest and offered to arrange for a bishopric for him.   If he were to become a Jesuit he would renounce any right to his inheritance or status in society.   His family’s attempts to dissuade him failed, Aloysius was not interested in higher office and still wanted to become a missionary. 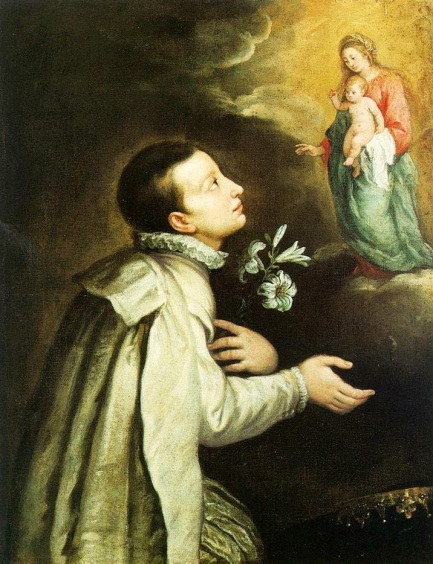 In November 1585, Aloysius gave up all rights of inheritance, which was confirmed by the emperor.   He went to Rome and, because of his noble birth, gained an audience with Pope Sixtus V.   Following a brief stay at the Palazzo Aragona Gonzaga, the Roman home of his cousin, Cardinal Scipione Gonzaga, on 25 November 1585, he was accepted into the novitiate of the Society of Jesus in Rome.   During this period, he was asked to moderate his asceticism somewhat and to be more social with the other novices.

Aloysius’ health continued to cause problems.   In addition to the kidney disease, he also suffered from a skin disease, chronic headaches and insomnia.   He was sent to Milan for studies but after some time he was sent back to Rome because of his health.   On 25 November 1587, he took the three religious vows of chastity, poverty and obedience.   In February and March 1588, he received minor orders and started studying theology to prepare for ordination.   In 1589, he was called to Mantua to mediate between his brother Rodolfo and the Duke of Mantua.   He returned to Rome in May 1590.   It is said that later that year, he had a vision in which the Archangel Gabriel told him that he would die within a year. 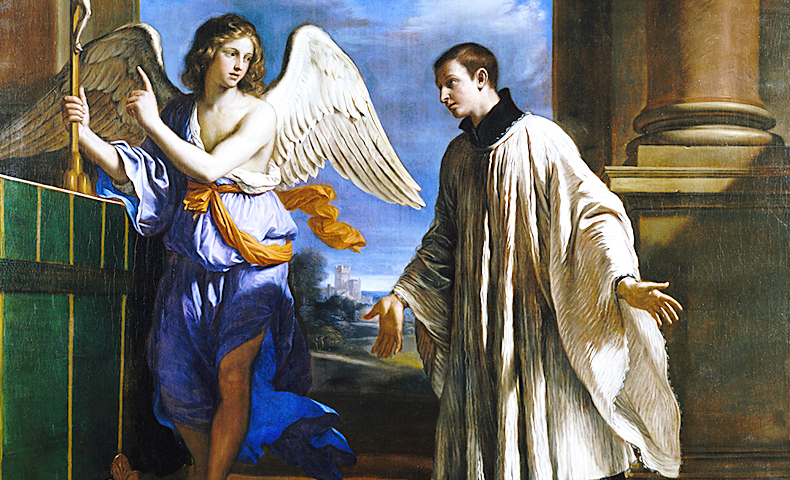 In 1591, a plague broke out in Rome.   The Jesuits opened a hospital for the stricken and Aloysius volunteered to work there.   After begging alms for the victims, Aloysius began working with the sick, carrying the dying from the streets into a hospital founded by the Jesuits.   There he washed and fed the plague victims, preparing them as best he could to receive the sacraments.   But though he threw himself into his tasks, he privately confessed to his spiritual director, Fr Robert Bellarmine (St Robert Bellarmine (1542-1621) Doctor of the Church), that his constitution was revolted by the sights and smells of the work;  he had to work hard to overcome his physical repulsion.

At the time, many of the younger Jesuits had become infected with the disease, and so Aloysius’s superiors forbade him from returning to the hospital.   But Aloysius—long accustomed to refusals from his father—persisted and requested permission to return, which was granted.   Eventually he was allowed to care for the sick but only at another hospital, called Our Lady of Consolation, where those with contagious diseases were not admitted.   While there, Aloysius lifted a man out of his sickbed, tended to him, and brought him back to his bed.   But the man was infected with the plague.   Aloysius grew ill and was bedridden by 3 March 1591, a few days before his 23rd birthday. 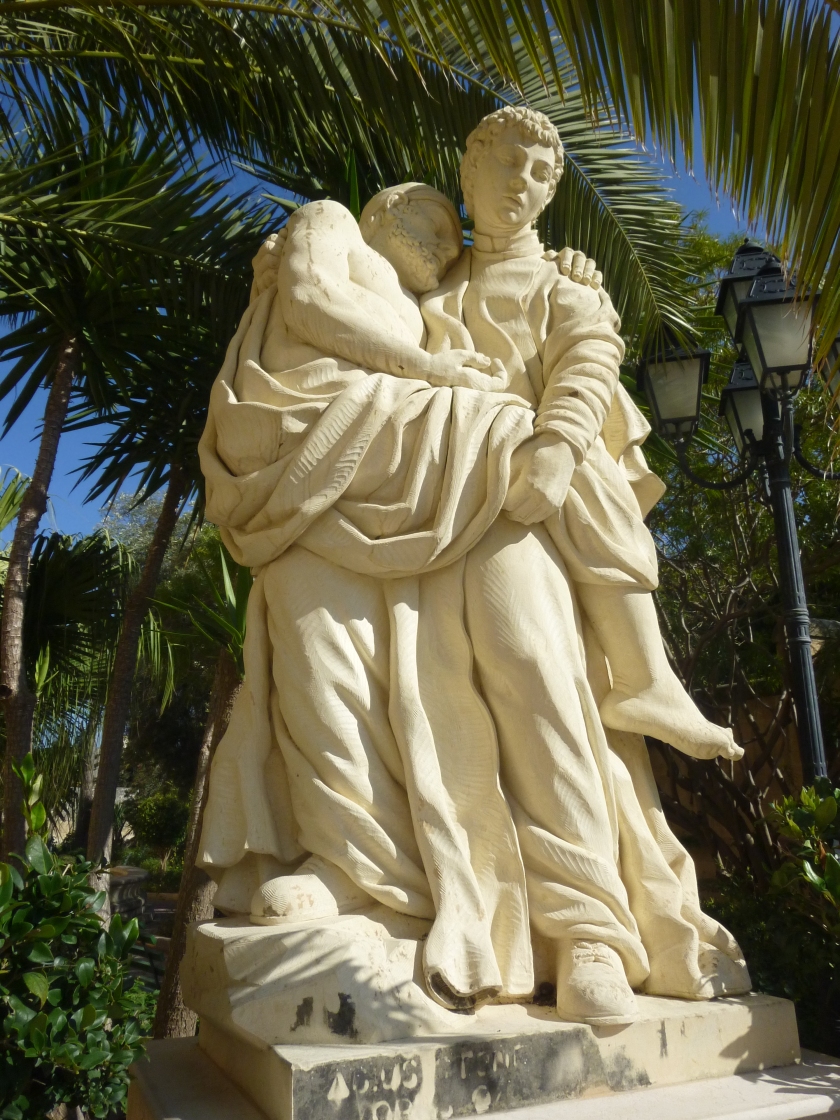 Aloysius rallied for a time but as fever and a cough set in, he declined for many weeks.   It seemed certain that he would die in a short tie, and he was given Extreme Unction. While he was ill, he spoke several times with his confessor, the cardinal and later saint, Robert Bellarmine.   Aloysius had another vision and told several people that he would die on the Octave of the feast of Corpus Christi.   On that day, 21 June 1591, he seemed very well in the morning but insisted that he would die before the day was over.   As he began to grow weak, Bellarmine gave him the last rites and recited the prayers for the dying.   He died just before midnight.   As Fr Tylenda tells the story, “When the two Jesuits came to his side, they noticed a change in his face and realised that their young Aloysius was dying.   His eyes were fixed on the crucifix he held in his hands and as he tried to pronounce the name of Jesus he died.”

Aloysius was buried in the Church of the Most Holy Annunciation, which later became the church of Saint Ignatius of Loyola (Sant’Ignazio) in Rome.   His name was changed to “Robert” before his death, in honour of his confessor.   Many people considered him to be a saint soon after his death and his remains were moved into the Sant’Ignazio church, where they now rest in an urn of lapis lazuli in the Lancellotti Chapel.   His head was later translated to the basilica bearing his name in Castiglione delle Stiviere.   He was beatified only fourteen years after his death by Pope Paul V, on 19 October 1605.   On 31 December 1726, he was canonised together with another young Jesuit novice, Stanislaus Kostka, by Pope Benedict XIII.

Purity was his notable virtue.   The Carmelite mystic St Maria Magdalena de Pazzi had a vision of him on 4 April 1600.   She described him as radiant in glory because of his “interior works,” a hidden martyr for his great love of God. 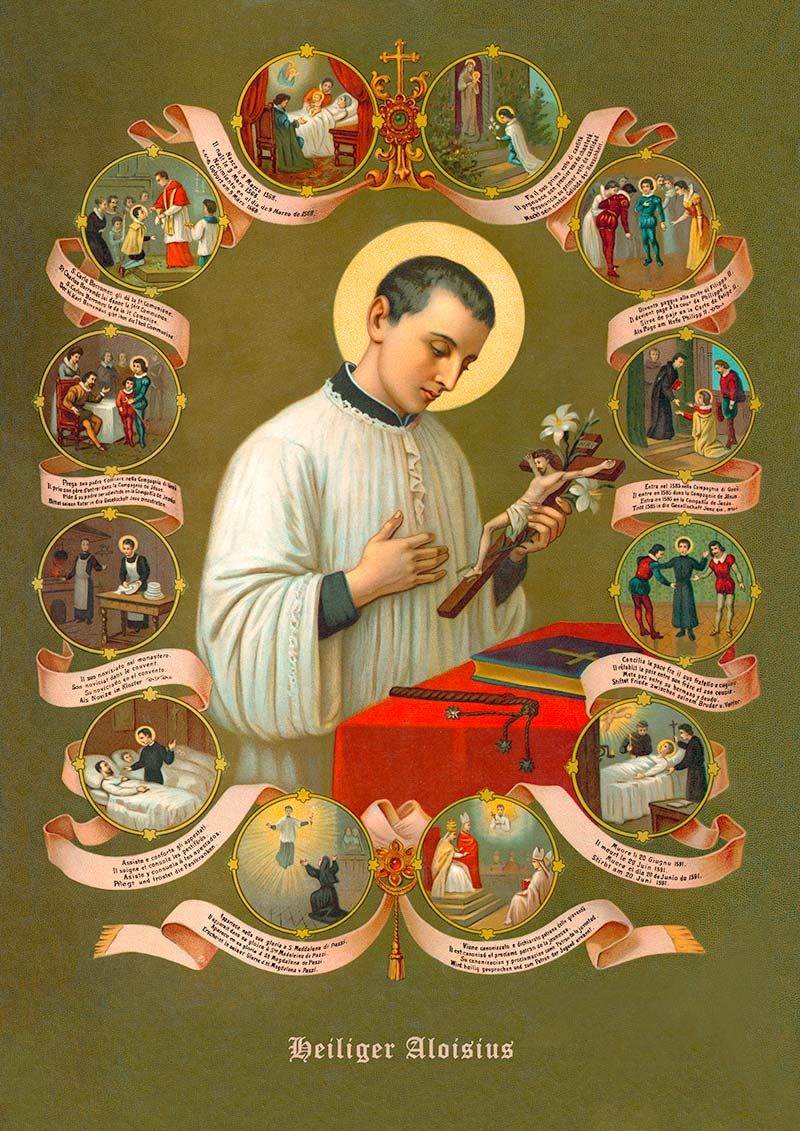 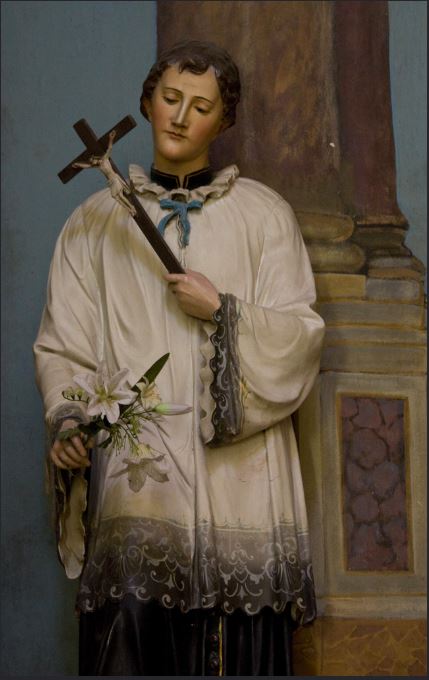