The early years of Camillus gave no sign of sanctity.   At the age of nineteen he took service with his father, an Italian noble, against the Turks and after four years hard campaigning found himself, through his violent temper, reckless habits and inveterate passion for gambling, a discharged soldier and in such straitened circumstances that he was obliged to work as a labourer on a Capuchin convent which was then being built.   A few words from a Capuchin friar brought about his conversion and he resolved to become a religious. 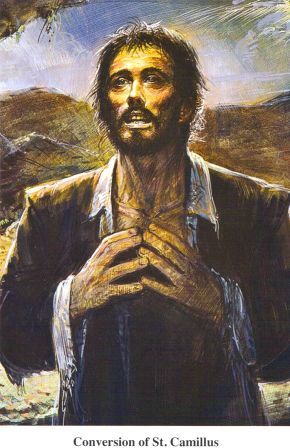 Thrice he entered the Capuchin novitiate but each time an obstinate wound in his leg forced him to leave.   He repaired to Rome for medical treatment and there took St Philip as his confessor and entered the hospital of St Giacomo, of which he became in time the superintendent.   The carelessness of the paid chaplains and nurses towards the suffering patients now inspired him, with the thought of founding a congregation to minister to patients.

Members of his order worked in hospitals, prisons and in the homes of those afflicted by disease.   The order’s original name, the “Fathers of a Good Death,” reflected the desire to aid in their spiritual salvation and prepare the dying to receive their last rites.   Later known as the Order of the Ministers of the Sick, or simply as the “Camillians,” the group received papal approval in 1586 and was confirmed as a religious order in 1591.   In addition to the traditional vows of poverty, chastity and obedience, they took a vow of unfailing service to the sick.

Summoned at every hour of the day and night, the devotion of Camillus never grew cold.   With a woman’s tenderness he attended to the needs of his patients.   He wept with them, consoled them and prayed with them.   He knew miraculously, the state of their souls and St Philip saw angels whispering to two Servants of the Sick who were consoling a dying person.   One day a sick man said to the Saint, “Father, may I beg you to make up my bed?  it is very hard.” Camillus replied, “God forgive you, brother!   You beg me! Don’t you know yet that you are to command me, for I am your servant and slave.” “Would to God,” he would cry, “that in the hour of my death one sigh or one blessing of these poor creatures might fall upon me!” 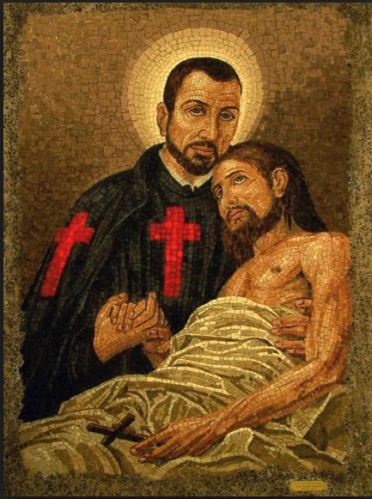 Camillus himself suffered physical ailments throughout his life.   His leg wound failed to heal over the course of almost five decades, in addition to which he suffered from sores and severe kidney trouble.   But he is said to have spent time with the sick even while unable to walk, by crawling from bed to bed.

The founder of the Ministers of the Sick lived to assist at a general chapter of his order in Rome during 1613 and to make a last visitation of many of their hospitals.    Learning that he himself was incurably ill, Camillus responded:  “I rejoice in what has been told me. We shall go into the house of the Lord.”

Receiving the Eucharist for the last time, he declared: “O Lord, I confess I am the most wretched of sinners, most undeserving of your favour but save me by your infinite goodness.   My hope is placed in your divine mercy through your precious blood.”

After giving his last instructions to his fellow Ministers of the Sick, St Camillus de Lellis died on 14 July 1614.   He was Canonised by Benedict XIV in 1746 and later named – along with Saint John of God – as one of the two main co-patrons of nurses and nursing associations in 1930. 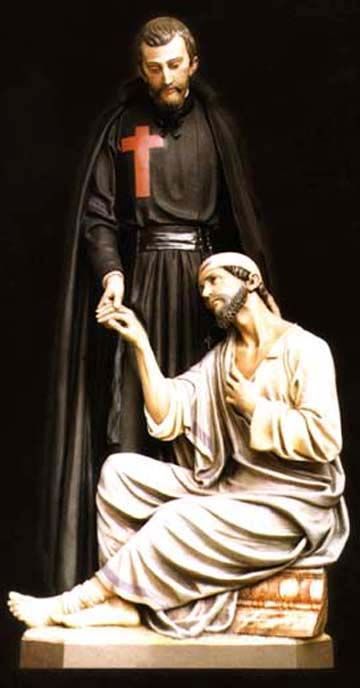