The story of this humble Jesuit brother illustrates that status and achievements count for nothing for those who accept the responsibility assigned them with the conviction that it is God’s will.   Rodriguez set himself free of ego, he found meaning and fulfilment in the lowliest tasks accorded him and was zealous enough to give more than was demanded, in the spirit of the Ignatian Magis.
Early biographies describe Rodriguez as a superhero who spiritually survived a rather humdrum, tedious job for 46 years.   They tended to overlook the tenacity and uncompromising dedication of the unassuming brother who would inspire generations of Jesuits in the art of religious hospitality.   He was a multi-tasker, blending ‘spiritual conversation’ with business while always attending courteously to visitors.   He quietly counselled students and reached out to the poor who hang around outside the door. Rodriguez made sure his job was never humdrum and tedious!

He displayed unconditional discipleship to Jesus Christ.   He was a brother and companion, serving all as he would Christ personified.   “I’m coming Lord,” he would cry when someone knocked.   He had personalised his spirituality and this is what gave depth, appeal and credibility to his convictions.   The rosary entwining his fingers may not always have been used to pray the mysteries but to murmur aspirations that connected him with the divinity present everywhere.   He was a contemplative in action and spent most of his spare-time in prayer.   He was a mystic, as his autobiography penned under obedience would reveal, favoured by God with remarkable mystical graces, ecstasies and visions of our Lord, our Lady and the saints.

At the age of 72, Rodriguez would counsel and motivate St Peter Claver (1580-1654), a young student of theology in Palma, to volunteer for “the missions” in the New World.   In true Ignatian spirit Rodriguez looked beyond the boundaries of his world with the universal good of the Society of Jesus at heart – a typical Jesuit charism.   Claver achieved sainthood through his indefatigable service to African slaves in Colombia.

Rodriguez is the patron of Jesuit brothers.   The lay-brother of the olden days, who performed routine duties such as cooking, construction and farming, has vanished. Today the Jesuit brother can hardly be distinguished from the priest, because of his professional competence in many fields.   In the spirit of Alphonsus Rodriguez, brothers sacramentalise their work and bear witness to God’s compassionate love.

(Excerpt on the 400th anniversary of St Alphonsus death, 2017 – Hedwig Lewis SJ is the author of “Profiles in Holiness, Brief Biographies of Jesuit Saints” and “Jesuit Saints without Paint”)

St Alphonsus Rodriguez, Pray for Us! 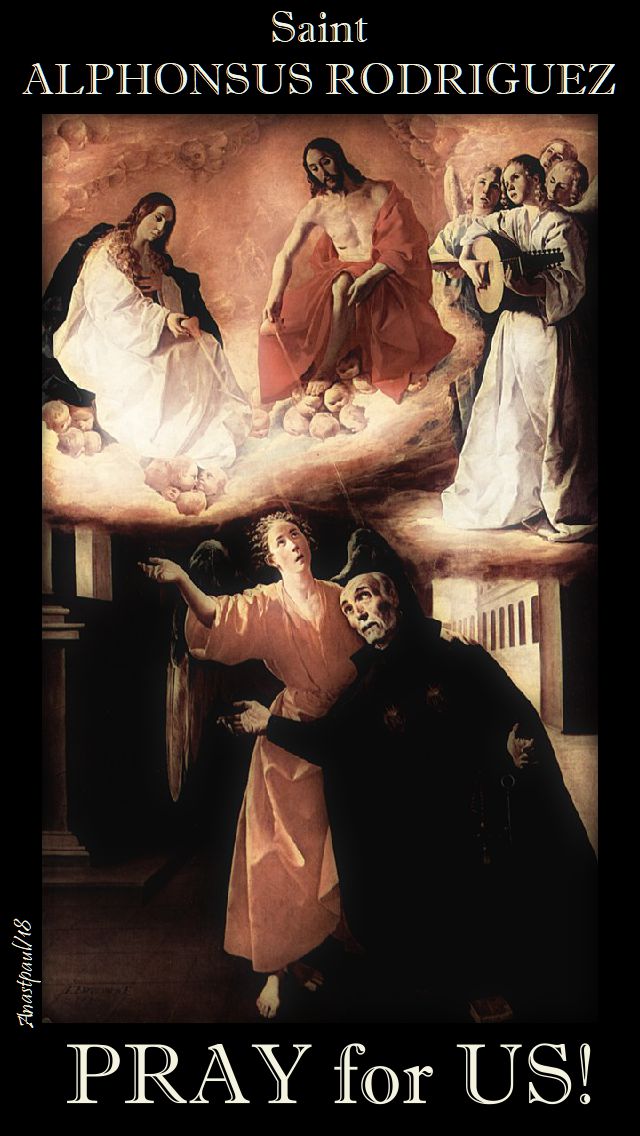