John van Ruysbroeck was a Flemish mystical writer who greatly influenced mystical teaching in the late Middle Ages and whose name is associated with the religious renewal in the Lowlands that also produced, The Imitation of Christ.   He was born near Brussels in 1293 and was raised by a devout mother who trained him in a life of holiness.
At the age of eleven, he went to Brussels to live with an uncle, John Hinckaert, a priest and canon of St Gudule’s.   John studied for the priesthood and was ordained in 1317. Under his uncle’s roof he continued to live a life of retirement and study and began the writings that were to be the basis of his spiritual teaching: The Spiritual Espousals, The Kingdom of Lovers, and The Tabernacle.

Together with his uncle and another canon, Francis van Coudenberg, Blessed John Ruysbroeck withdrew to a hermitage near Soignes for a life of greater solitude and a number of disciples joined them.   They decided to inaugurate a formal religious institute and adopted the rule of the canons of St Victor.   John was made the prior of the new institute.

This period, from his religious profession (1349) to his death (1381), was the most active and fruitful of Ruysbroeck’s career.   During this time, his fame as a man of God, as a sublime contemplative and a skilled director of souls, spread beyond the bounds of Flanders and Brabant to Holland, Germany and France.   He had relations with the nearby Carthusian house at Herne and also with several communities of Poor Clare Franciscans.

Excellent writings continued to come forth from his pen: The Book of the Sparkling Stone, The Little Book of Enlightenment, and The Book of the Twelve Beguines.   Literally, Ruysbroeck wrote as the spirit moved him.   He loved to wander and meditate in the solitude of the forest adjoining the cloister;  he was accustomed to carry a tablet with him and on this to jot down his thoughts as he felt inspired so to do.   Late in life he was able to declare that he had never committed anything to writing save by the motion of the Holy Spirit.

John Ruysbroeck’s writings are considered classics of spirituality, anticipating the writings of St John of the Cross in their clarity and doctrine.   He strongly opposed the quietist tendencies of many of his contemporaries.   His solid theological background and his ability to make clear the sure path of spiritual progress gave him a wide reading and his books are lucid commentaries on the Augustinian doctrine of the life of grace.

For several years before his death, John lived in a small cell, just outside the cloister of his monastery.   In his eighty-eighth year, he asked to be taken to the community infirmary, where he prepared himself for death.   He died on 2 December1381.

After John’s death in 1381, his relics were carefully preserved and his memory honoured as that of a saint. Many of his spiritual children called him the  “the Admirable”, Ecstatic Doctor or Divine Doctor.

When Groenendaal Priory was suppressed by Joseph II in 1783, his relics were transferred to St Gudule’s, Brussels, where, however, they were lost during the French Revolution.   John was Beatified on 1 December 1908, by St Pope Pius X. 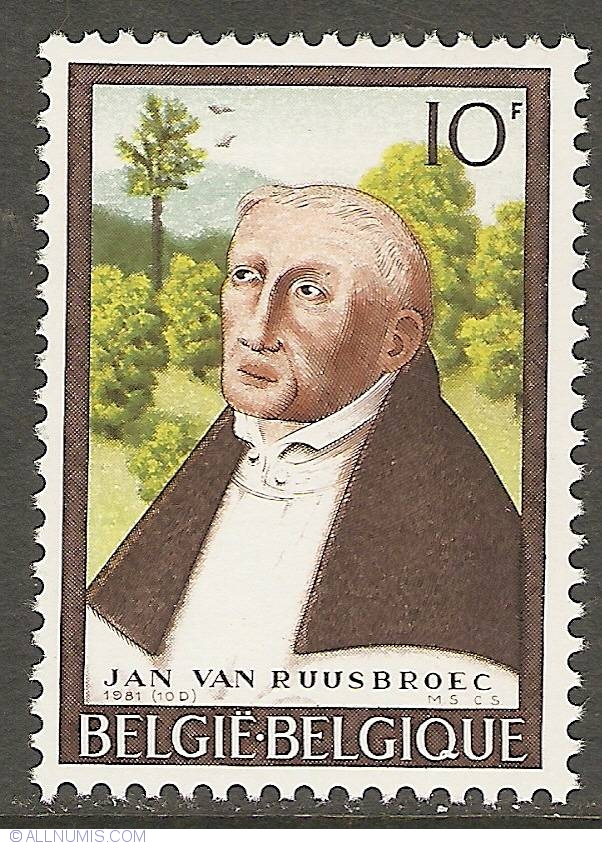 No authentic portrait of John is known to exist but the traditional picture represents him in the canonical habit, seated in the forest with his writing tablet on his knee, as he was in fact found one day by the brethren—rapt in ecstasy and enveloped in flames, which encircle without consuming the tree under which he is resting.