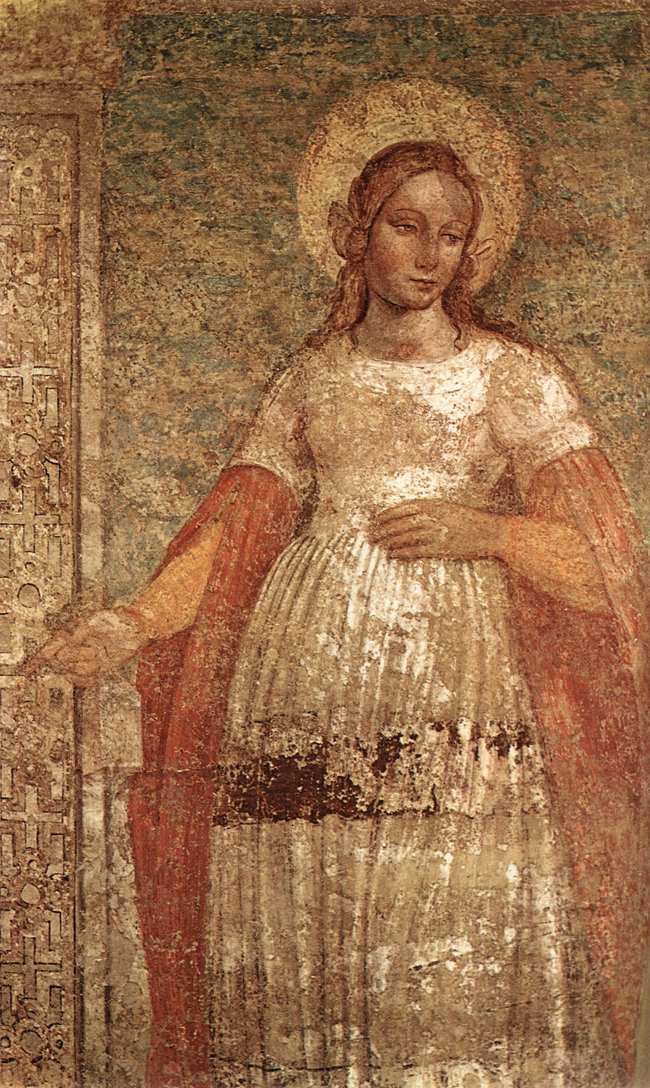 “A new kind of martyrdom!” exclaimed St Ambrose (340-397) , bishop of Milan.   The assembly cheered and applauded.   He was celebrating St Agnes because she was a virgin, a martyr—and a child.   She was executed at Rome in 304 during the Emperor Diocletian’s vicious persecution.   Here are Ambrose’s observations on her death:

There was little or no room in that small body for a wound.   Though she could scarcely receive the blow, she could rise superior to it.   Girls of her age cannot bear even their parents’ frowns and, pricked by a needle, weep as for a serious wound.   Yet she shows no fear of the blood-stained hands of her executioners.   She stands undaunted by heavy, clanking chains.   She offers her whole body to be put to the sword by fierce soldiers.   She is too young to know of death, yet is ready to face it.   Dragged against her will to the altars, she stretches out her hands to the Lord in the midst of the flames, making the triumphant sign of Christ the victor on the altars of sacrilege.   She puts her neck and hands in iron chains, but no chain can hold fast her tiny limbs.

A new kind of martyrdom!   Too young to be punished, yet old enough for a martyr’s crown; unfitted for the contest, yet effortless in victory, she shows herself a master in valour despite the handicap of youth.   As a bride she would not be hastening to join her husband with the same joy she shows as a virgin on her way to punishment, crowned not with flowers but with holiness of life, adorned not with braided hair but with Christ himself.

In the midst of tears, she sheds no tears herself.   The crowds marvel at her recklessness in throwing away her life untasted, as if she had already lived life to the full.   All are amazed that one not yet of legal age can give her testimony to God.   So she succeeds in convincing others of her testimony about God, though her testimony in human affairs could not yet be accepted.   What is beyond the power of nature, they argue, must come from its creator.

What menaces there were from the executioner, to frighten her;  what promises made, to win her over;  what influential people desired her in marriage!   She answered: “To hope that any other will please me does wrong to my Spouse.   I will be His who first chose me for Himself. Executioner, why do you delay?   If eyes that I do not want can desire this body, then let it perish.”   She stood still, she prayed, she offered her neck.

You could see fear in the eyes of the executioner, as if he were the one condemned, his right hand trembled, his face grew pale as he saw the girl’s peril, while she had no fear for herself.   One victim, but a twin martyrdom, to modesty and to religion – Agnes preserved her virginity and gained a martyr’s crown.”

Exasperated and egged on by her first accuser, the governor ordered her execution. Agnes was taken to the Stadium of Domitian, where she courageously faced a nervous soldier who hacked her to death with his sword.

Over the centuries the little virgin martyr became one of the most popular saints in Christian history.

St Agnes’s death was “a new kind of martyrdom!”   She taught us adults the meaning of valour while she was still a child.   Agnes hurried to the place of her execution more joyfully than a bride goes to her wedding.   And she was adorned not with plaited hair, but with Christ Himself.