Women like St Teresa of Ávila and St Catherine of Genoa contributed significantly to the Catholic Reformation.   But in the 16th century church perhaps, no woman responded more creatively to the need for reform than St Angela Merici.   She built communities that trained single women in Christian living and provided them a secure place of honour in their local societies.

A single lay woman herself, Angela established groups of unmarried women of all classes in Brescia and other northern Italian cities.   She wanted the women to be in the world but not of it.   So they consecrated themselves to God and promised to remain celibate.   But they lived at home with their families and looked for ways to serve their neighbours.   In 1535, Angela organised the groups into the Company of St Ursula, later called the Ursulines.   Unique for its time, her avant-garde association anticipated modern secular institutes and covenant communities.

Angela gave the Ursulines a military structure, dividing towns into districts governed hierarchically by mature Christian women.   This design allowed the community to support members in daily Christian living and protect them from spiritually unhealthy influences. 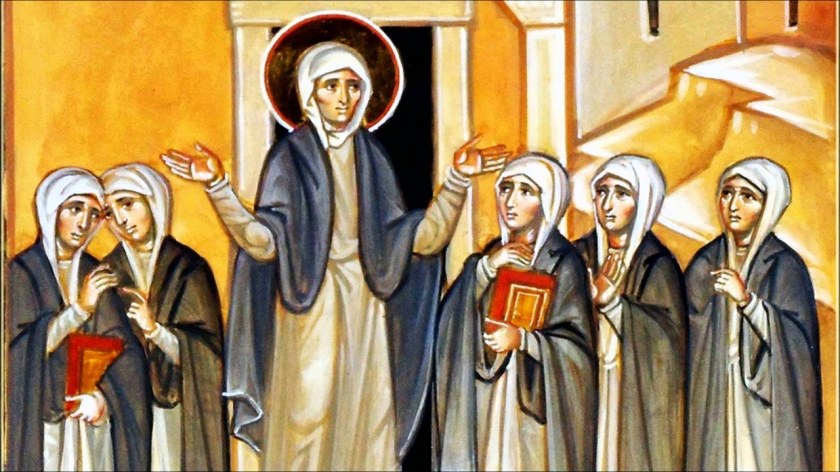 The rule that Angela wrote for the company required members to remain faithful to the Christian basics.   In the following excerpt, she explains the importance of daily vocal and mental prayer:

Each one of the sisters should be solicitous about prayer, mental as well as vocal, that is a companion to fasting.   For Scripture says prayer is good with fasting.   As by fasting we mortify the carnal appetites and the senses, so by prayer we beg God for the true grace of spiritual life.   Thus, from the great need we have of divine aid, we must pray always with mind and heart, as it is written, “Pray constantly”  (1 Thessalonians 5:17 NJB).   To all we counsel frequent vocal prayer that prepares the mind by exercising the bodily senses.   So each one of you, every day will say with devotion and attention at least the Office of the Blessed Virgin and the seven penitential psalms (Psalm 6, 32, 38, 51, 102, 130, and 143) because in saying the office we are speaking with God.

To afford matter and some method in mental prayer, we exhort each one to raise her mind to God and to exercise herself in it every day.   And so in the secret of her heart, let her say:

“My Saviour, illumine the darkness of my heart and grant me grace rather to die than to offend your Divine Majesty anymore.   Guard, O Lord, my affections and my senses, that they may not stray, nor lead me away from the light of your face, the satisfaction of every afflicted heart.

I ask you, Lord, to receive all my self-will, that by the infection of sin, is unable to distinguish good from evil.   Receive, O Lord, all my thoughts, words and deeds, interior and exterior, that I lay at the feet of your Divine Majesty.   Although I am utterly unworthy, I beseech you to accept all my being.”

At Angela Merici’s death in 1540 she had started 24 groups.   Over the years the Ursulines have flourished as the oldest and one of the most respected of the church’s teaching orders.

To the long list of authorities Ursulines were to obey—Ten Commandments, Church, parents, civil laws—St Angela added “divine inspirations that you may recognise as coming from the Holy Spirit.”   A refreshing and liberating rule.   Also a dangerous one, for when it’s obeyed, the Holy Spirit may act in unexpected ways.