For all of us, a particular cause for comfort is today’s Beatification.   This solemn act takes place in the Croatian national shrine of Marija Bistrica on the first Saturday of the month of October.   Beneath the gaze of the Most Blessed Virgin, an illustrious son of this blessed land is raised to the glory of the altars, on the hundredth anniversary of his birth.   It is an historic moment in the life of the Church and of your nation.   The Cardinal Archbishop of Zagreb, one of the outstanding figures of the Catholic Church, having endured in his own body and his own spirit the atrocities of the Communist system, is now entrusted to the memory of his fellow countrymen with the radiant badge of martyrdom.

The Episcopate of your country asked that the Beatification of Cardinal Stepinac take place here, in the Shrine of Marija Bistrica.   I know from personal experience the significance that the Shrine of Jasna Gora had for the Polish people at the time of Communist rule, a Shrine closely linked to the pastoral ministry of the Servant of God Cardinal Stefan Wyszynski.   I am not surprised that this Shrine, or that of Solona which I shall visit tomorrow, have had a similar importance for you.   For some time I have wanted to visit the Shrine of Marija Bistrica.   And so I gladly accepted the proposal of the Croatian Episcopate and today celebrate the solemn beatification ceremony in this significant place.

“If anyone serves me, he must follow me” (Jn 12:26).   Blessed Alojzije Stepinac took the Good Shepherd as his sole Teacher, following His example to the end and offering his life for the flock entrusted to him at a particularly difficult period of history.

The person of the new Beatus sums up, so to speak, the whole tragedy which befell the Croatian people and Europe in the course of this century marked by the three great evils of fascism, national socialism and communism.   He is now in the joy of heaven, surrounded by all those who, like him, fought the good fight, purifying their faith in the crucible of suffering.   Today we look to him with trust and invoke his intercession.

Significant in this regard are the words spoken by the new Beatus in 1943, during the Second World War, when Europe was in the grip of unheard-of violence:   “What system does the Catholic Church support today, while the whole world is fighting for a new world order?   We, in condemning the injustices, all the killing of innocent people, the burning of peaceful villages, the destruction of the labour of the poor, … give this answer: the Church supports that system which is as old as the Ten Commandments of God.   We are for the system which is not written on impermanent tables but which has been written by the hand of the living God on the consciences of men” (Homilies, Addresses, Messages, Zagreb, 1996, 179-180).

“Father, glorify your name!” (Jn 12:28).   In his human and spiritual journey Blessed Alojzije Stepinac gave his people a sort of compass to serve as an orientation.   And these were its cardinal points – faith in God, respect for man, love towards all even to the offer of forgiveness and unity with the Church guided by the Successor of Peter.   He knew well that no bargains can be made with truth, because truth is not negotiable.   Thus he faced suffering rather than betray his conscience and not abide by the promise given to Christ and the Church.

In this courageous witness he was not alone.   He had at his side other courageous souls who, in order to preserve the unity of the Church and defend her freedom, agreed to pay with him a heavy price in imprisonment, mistreatment and even bloodshed  . To these generous souls – Bishops, priests, men and women religious and lay faithful – we offer today our admiration and gratitude.   Let us listen to their urgent call for forgiveness and reconciliation.   To forgive and to be reconciled, means to purify one’s memory of hatred, rancour, the desire for revenge, it means acknowledging as a brother even those who have wronged us, it means not being overcome by evil but overcoming evil with good (cf. Rom 12:21).
May you be blessed, “Father of our Lord Jesus Christ, Father of mercies and God of all comfort” (2 Cor 1:3), for this new gift of your grace.

May you be blessed, Unbegotten Son of God and Saviour of the world, for your glorious Cross, which in the Archbishop of Zagreb, Cardinal Alojzije Stepinac, has won a splendid victory.

May you be blessed, Spirit of the Father and the Son, Paraclete Spirit, who continue to manifest your holiness among men and unceasingly carry on the work of salvation.

Blessed be Jesus and Mary!

Blessed Aloysius Stepinac, Pray for Us! 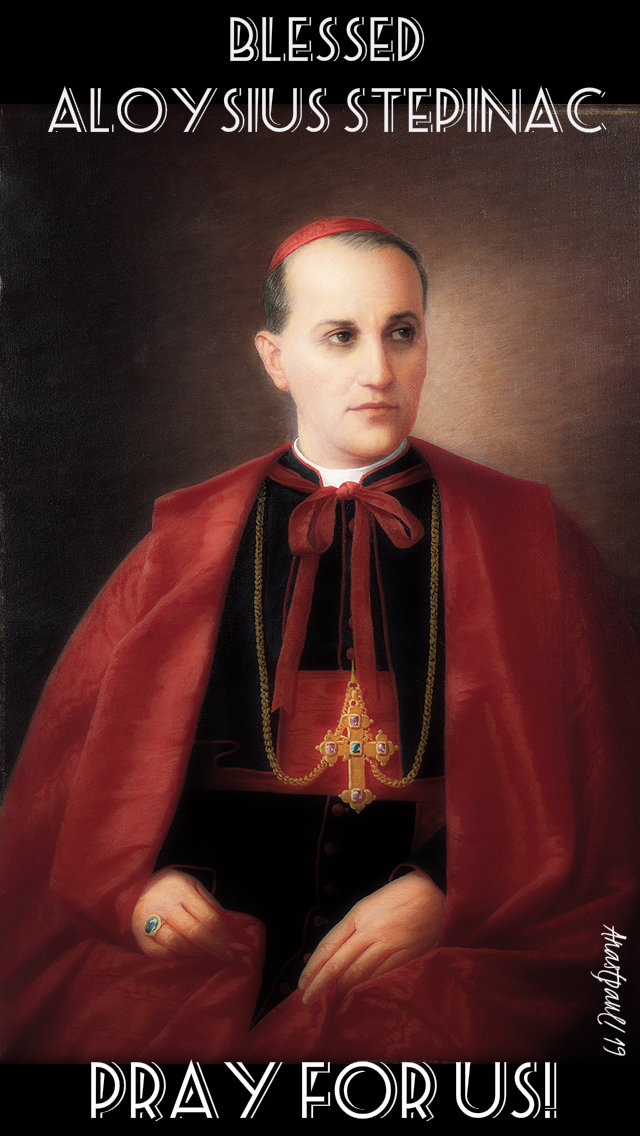