“Will you refuse to be crucified for Him,
who for your sake was nailed to the cross?”

An excerpt from his Catecheses, 13

The Catholic Church glories in every deed of Christ.   Her supreme glory, however, is the cross.   Well aware of this, Paul says – God forbid that I glory in anything but the cross of our Lord Jesus Christ!

At Siloam, there was a sense of wonder and rightly so.   A man born blind recovered his sight.   But of what importance is this, when there are so many blind people in the world?   Lazarus rose from the dead but even this affected only Lazarus.  What of those countless numbers who have died because of their sins?   Those five miraculous loaves fed five thousand people.   Yet this is a small number compared to those all over the world who were starved by ignorance.   After eighteen years a woman was freed from the bondage of Satan.   But are we not all shackled by the chains of our own sins?

For us all, however, the cross is the crown of victory!   It has brought light to those blinded by ignorance.   It has released those enslaved by sin.   Indeed, it has redeemed the whole of mankind!

Do not, then, be ashamed of the cross of Christ, rather, glory in it.   Although it is a stumbling block to the Jews and folly to the Gentiles, the message of the cross is our salvation.   Of course it is folly to those who are perishing but to us who are being saved, it is the power of God.   For it was not a mere man who died for us but the Son of God, God made man.

In the Mosaic law a sacrificial lamb banished the destroyer.   But now it is the Lamb of God who takes away the sin of the world.   Will He not free us from our sins even more? The blood of an animal, a sheep, brought salvation.   Will not the blood of the only-begotten Son bring us greater salvation?

He was not killed by violence, He was not forced to give up His life.   His was a willing sacrifice.   Listen to His own words – I have the power to lay down my life and take it up again.   Yes, he willingly submitted to His own passion.   He took joy in his achievement, in His crown of victory He was glad and in the salvation of man He rejoiced.   He did not blush at the cross for by it He was to save the world.   No, it was not a lowly man who suffered but God incarnate.   He entered the contest, for the reward He would win by His patient endurance.

Certainly in times of tranquillity the cross should give you joy.   But maintain the same faith in times of persecution.   Otherwise you will be a friend of Jesus in times of peace and His enemy during war.   Now you receive the forgiveness of your sins and the generous gift of grace from your King.   When war comes, fight courageously for Him. 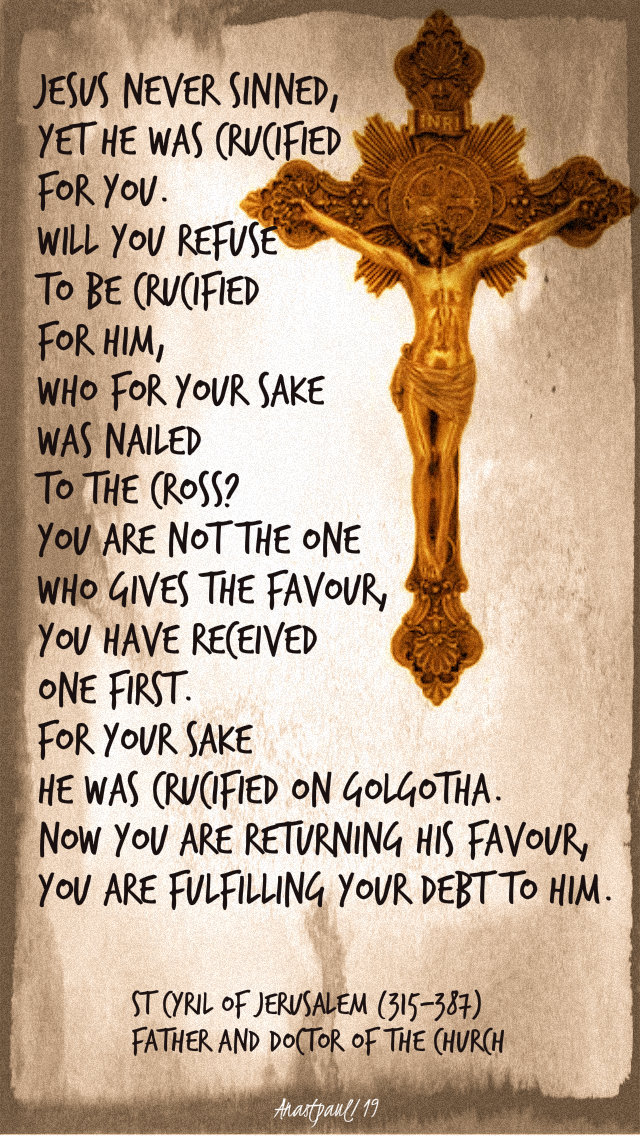 2 thoughts on “Lenten Thoughts – 15 March – “When war comes, fight courageously for Him.””