The Stations of the Cross – 18 April – Maundy Thursday

Begin with an Act of Contrition 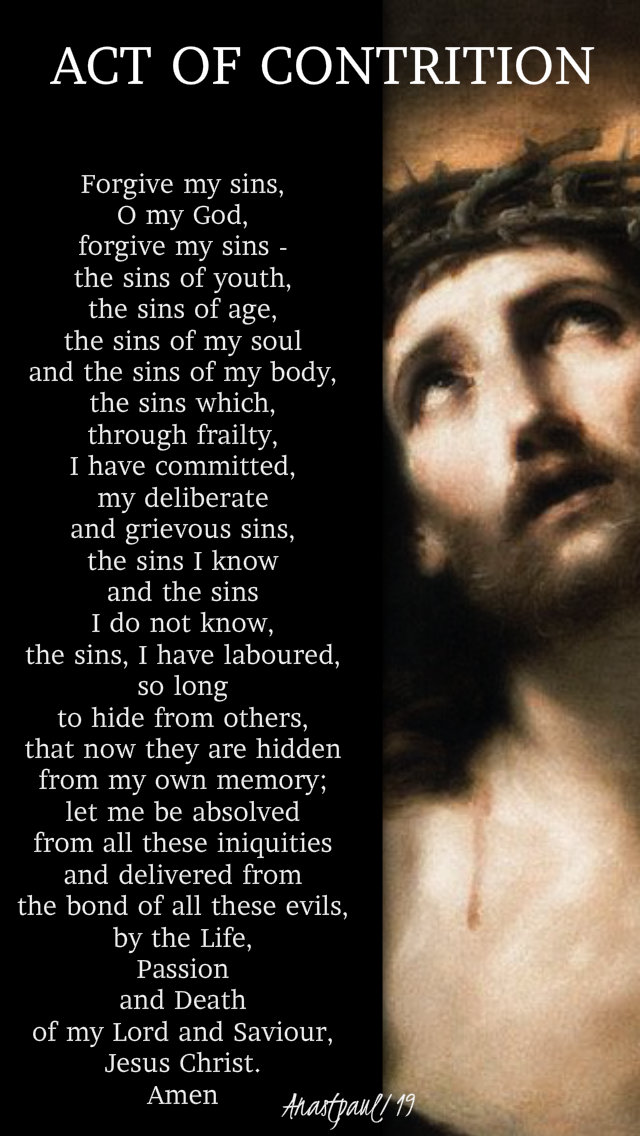 V. Adoramus te, Christe, et benedicimus tibi.
R. Quia per sanctam Crucem tuam redemisti mundum.
V. We adore You, O Christ and we bless You.
R. Because by Your holy cross, You have redeemed the world.

JESUS had now reached almost to the top of Calvary but, before He had gained the very spot where He was to be crucified, again He fell and is again dragged up and goaded onwards by the brutal soldiery.

We are told in Holy Scripture of three falls of Satan, the Evil Spirit.   The first was in the beginning; the second, when the Gospel and the Kingdom of Heaven were preached to the world, the third will be at the end of all things.   The first is told us by St John the Evangelist.   He says: “There was a great battle in heaven.   Michael and his Angels fought with the dragon, and the dragon fought, and his angels.   And they prevailed not, neither was their place found any more in heaven.   And that great dragon was cast out, the old serpent, who is called the devil and Satan.”   The second fall, at the time of the Gospel, is spoken of by our Lord when He says, “I saw Satan, like lightning, falling from heaven.” And the third by the same St John:  “There came down fire from God out of heaven, … and the devil … was cast into the pool of fire and brimstone.”

These three falls—the past, the present and the future—the Evil Spirit had in mind when he moved Judas to betray our Lord.   This was just his hour.   Our Lord, when He was seized, said to His enemies, “This is your hour and the power of darkness.”   Satan knew his time was short and thought he might use it to good effect.   But little dreaming that he would be acting in behalf of the world’s redemption, which our Lord’s passion and death were to work out, in revenge and, as he thought, in triumph, he smote Him once, he smote Him twice, he smote Him thrice, each successive time a heavier blow.   The weight of the Cross, the barbarity of the soldiers and the crowd, were but his instruments.   O Jesus, the only-begotten Son of God, the Word Incarnate, we praise, adore and love You for Your ineffable condescension, even to allow TYourself, thus for a time, to fall into the hands and under the power of the Enemy of God and man, in order thereby, to save us, from being his servants and companions for eternity.

This is the worst fall of the three.   His strength has for a while utterly failed Him and it is some time before the barbarous soldiers can bring Him to.   Ah! it was His anticipation of what was to happen to me.   I get worse and worse.   He sees the end from the beginning.   He was thinking of me all the time He dragged Himself along, up the Hill of Calvary.   He saw, that I should fall again in spite of all former warnings and former assistance.   He saw, that I should become secure and self-confident and that my enemy would then assail me with some new temptation, to which I never thought I should be exposed.   I thought my weakness lay all on one particular side which I knew.   I had not a dream that I was not strong on the other.   And so, Satan came down on my unguarded side and got the better of me, from my self-trust and self-satisfaction.   I was wanting in humility.   I thought no harm would come on me, I thought I had outlived the danger of sinning, I thought it was an easy thing to get to heaven and I was not watchful  . It was my pride and so I fell a third time.

I love You, Lord Jesus,
my love above all things,
I repent with my whole heart
for having offended You.
Never permit me to separate myself
from You again grant that I
may love always
and then do with me what You will.
(St Alphonsus Liguori)

Our Father, Hail Mary, Glory Be