Christ is Risen!   He is Truly Risen, Alleluia! – Thought for the day – 23 April – Tuesday of Easter Week

So she ran and went to Simon Peter and the other disciple, the one whom Jesus loved and said to them, “They have taken the Lord out of the tomb and we do not know, where they have laid him.”…John 20:2

“Church of men, Church of women”

In the Gospel, Mary of Magdala, the first person to see the open grave, rouses the two most important disciples – Peter (ecclesial office) and John (ecclesial love).

Both disciples run there “together” yet not together, for, unburdened by the cares borne by Office, Love runs faster.   Yet Love yields to Office when it comes to examining the tomb and Peter thus becomes the first to view the cloth that had covered Jesus’ head and establish that no theft had occurred.   That is enough to permit Love to enter, who “sees and believes” – not precisely in the Resurrection but in the correctness of all that has happened with Jesus.   This is as far as the two symbolic representatives of the Church go – things have happened properly, faith in Jesus is justified, despite all the opaqueness of the situation.

It is the woman for whom this first turns into genuine belief in the Resurrection.   She does not “go home” but perseveres at the place where the dead one disappeared, searching for Him.

The empty place becomes luminous, measured off by the two angels at the head and the foot.   But this luminous emptiness is not enough for the Church’s love – the forgiven woman here, seems to represent the Woman herself, Mary the Mother, she has to have her one true Love.   This she receives in Jesus’ call – “Mary!”   With that, everything is more than complete – the sought after corpse is the eternally Living One.   But she dare not hold Him, for He is on His way to the Father and earth ought not hold Him back. Instead it must consent.   As it was with His Incarnation, so now with His return to the Father.

This Yes, turns into the happiness of the mission to the brethren, giving is more blessed than holding on.

The Church is Woman at her most profound depths, as woman she embraces both ecclesial office and ecclesial love, which belong together.   “The woman will encompass the man” (Jer 31:22). 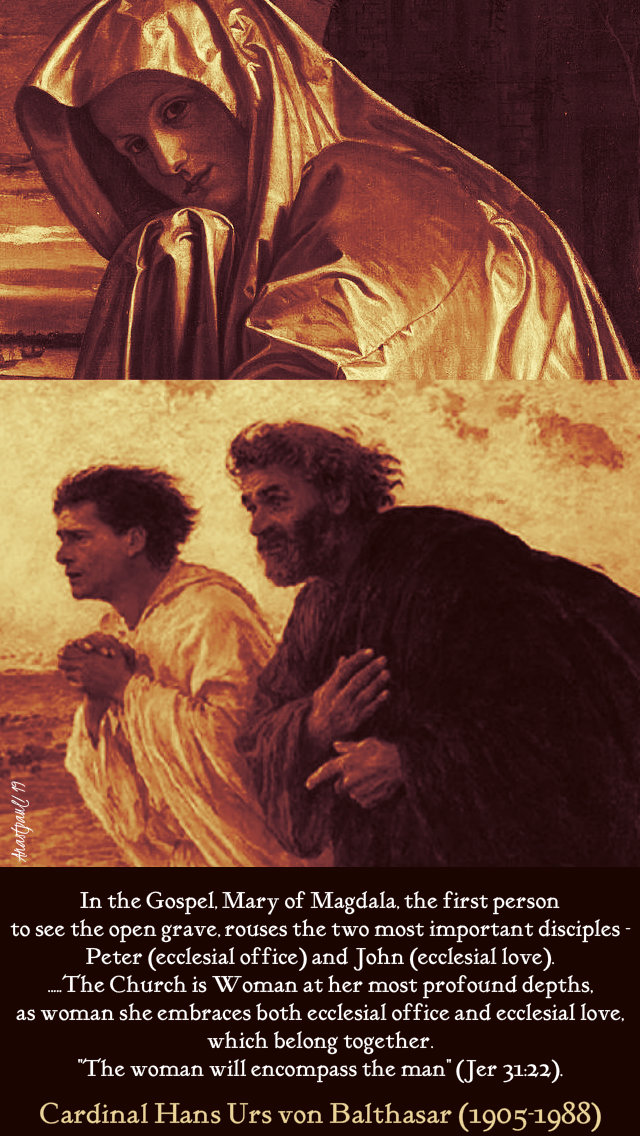