Lebanon’s Apostle of the Cross
Brother Jacque’s long-cherished dream of erecting a large Cross in Lebanon was a concrete expression of his commitment to his Christian faith and to his native country. He wanted to make it not only a meeting place for Franciscan Tertiaries but above all, a place of prayer for all those fallen in war and for the Lebanese who had emigrated in search of work.   With the help of collected money he completed this project which also included a church dedicated to Our Lady of the Sea and, later, hospital, orphanage and rest home for retired priests in 1923.

Brother James’s love for the Cross of Christ was so legendary that people christened him ‘the Apostle of the Cross’.   He himself prayed the Stations of the Cross everyday and he encouraged others to frequently pray this prayer.   Among his publications is a booklet of mediations for the Way of the Cross and the congregation of Tertiary Sisters he founded to run his corporal works of mercy projects is called the ‘Congregation of Franciscan Sisters of the Cross of Lebanon’.   Among his frequently quoted maxims are the following: “I myself have the Cross as a destiny”., “One ounce of a Cross is much better than a ton of books of prayer.”, and “O Cross of the Lord, so dear to the heart”.   And as he left this world he held his well-worn Crucifix in his hands.

Besides his love of the Cross, Brother James also had a deep devotion to the Eucharist and to Our Blessed Lady.   He prayed the fifteen decades of the rosary every day. He viewed our Lady as the perfect guide who leads people to Christ.   “Honouring Mary, no matter how sacred, is only the door leading to Jesus.   Mary is the means, Jesus is the end. Mary is the road, Jesus is the destination”.   It was in adoration before the Blessed Sacrament that Brother James reached this destination while here on earth.   Sometimes, as he adored the the Lord in the tabernacle, he would pray, “How I would prefer to take you in procession throughout the streets rather than closing up on you in the tabernacle”.

Apostle of Lebanon
But inevitable old-age and illness impacted this energetic Capuchin Brother’s own strength of also.   He was already known throughout Lebanon as Abouna Yaaqoub(أبونا يعقوب) meaning Father Jacques, Father James or Abba Jacob.
At dawn on Saturday 26 June 1954 he said, “Today is my last day!” and he died at 3 o’ clock in the afternoon  . The radio, the press, his friends and church bells in the villages announced his death.   Thousands flocked to the Friary of the Cross to weep, pray and receive a final blessing.   His body was laid to rest in a tomb of the new Calvary Chapel. This chapel soon became a site that is visited by an ever-growing throngs of pilgrims. Tens of thousands of Lebanese turned out to celebrate his beatification in Beirut’s Martyrs Square.   That bloodstained square which witnessed so many tragedies of wartorn Lebanon’s recent history resound with cheers of joy as the painting of the Brother Jacques of Ghazir was unveiled above it after the Pope’s representative, Cardinal Martens, proclaimed the faithful son of Lebanon, Khalil Haddad, the Capuchin Order’s ‘Abuna Yaaqub’ a Blessed.   His beatification a moment of hope for unity in a country ripped apart by factional warfare and international conflict. 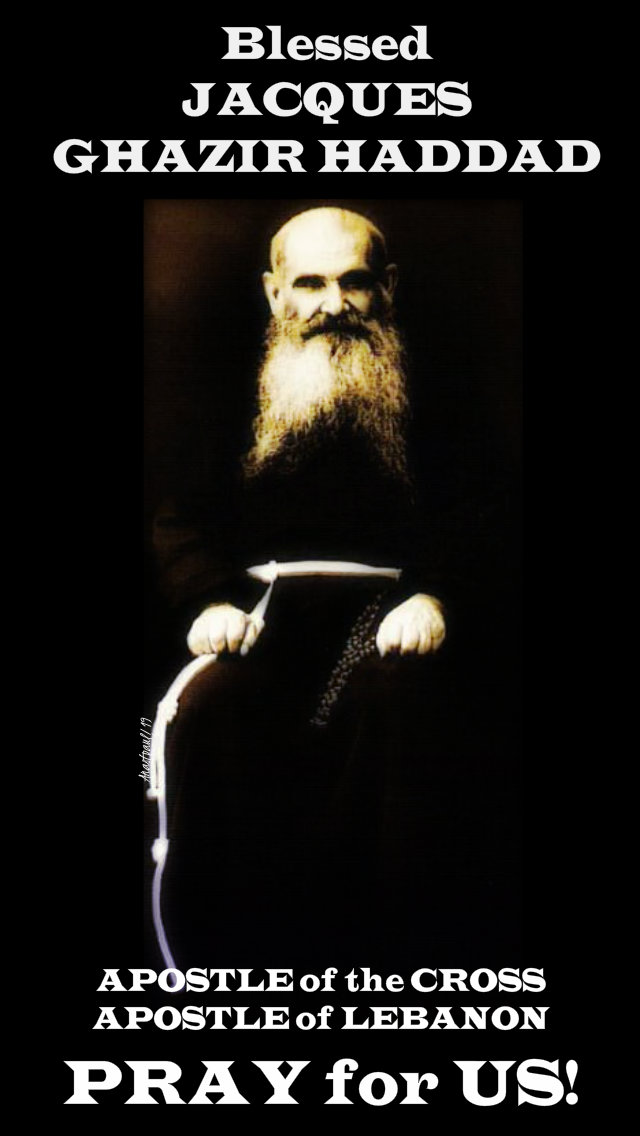