Saint of the Day – 28 September – St Lorenzo Ruiz (1600-1637) First Saint and Protomartyr of the Philippines – Layman, Husband and Father, Marian devotee – born in 1600 at Binondo, Manila, Philippines and died on 29-30 September 1637 at Nagasaki, Japan by being crushed over a period of three days while hanging upside down.   Patronages – The Philippines, Filipinos, Overseas Filipino Workers and migrant workers, the poor, separated families, Filipino youth, Chinese-Filipinos, Filipino Altar servers, Tagalogs, Archdiocese of Manila. 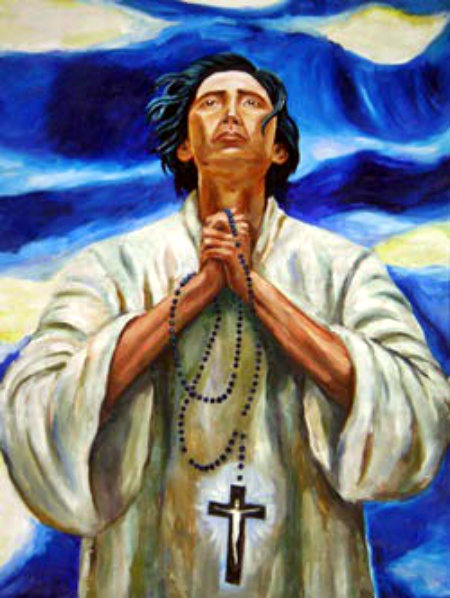 Lorenzo Ruiz was born in Binondo, Manila, to a Chinese father and a Filipino mother who were both Catholic.   His father taught him Chinese while his mother taught him Tagalog.

Ruiz served as an altar boy at the Binondo Church.   After being educated by the Dominican friars for a few years, Ruiz earned the title of escribano (calligrapher) because of his skilful penmanship.   He became a member of the Confraternity of the Most Holy Rosary.   He married Rosario, a native and they had two sons and a daughter. The Ruiz family led a generally peaceful, religious and content life.

In 1636, whilst working as a clerk for the Binondo Church, Ruiz was falsely accused of killing a Spaniard.   Ruiz sought asylum on board a ship with three Dominican priests – Saint Antonio Gonzalez, Saint Guillermo Courtet, and Saint Miguel de Aozaraza; a Japanese priest, Saint Vicente Shiwozuka de la Cruz and a lay leper, Saint Lázaro of Kyoto.   Ruiz and his companions sailed for Okinawa on 10 June 1636, with the aid of the Dominican fathers. 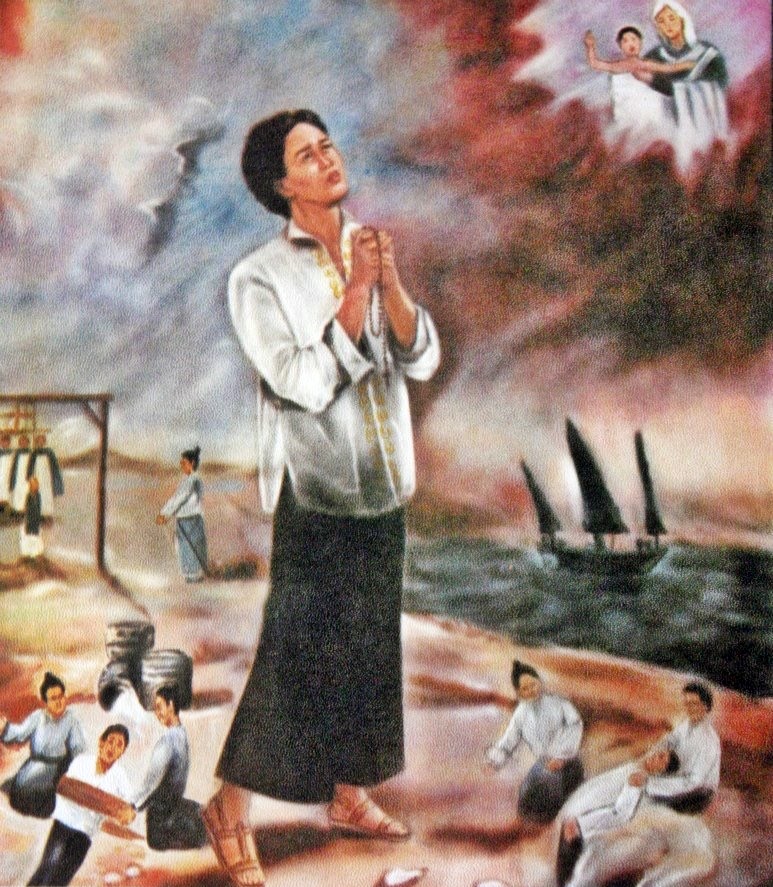 The Tokugawa Shogunate was persecuting Christians by the time Ruiz had arrived in Japan.   The missionaries were arrested and thrown into prison and after two years, they were transferred to Nagasaki to face trial by torture.   The group endured many and various cruel methods of torture.

On 27 September 1637, Ruiz and his companions were taken to Nishizaka Hill, where they were tortured by being hung upside-down over a pit.   This form of torture was known as tsurushi in Japanese or “gallows and pit” in Spanish.   The method, alleged to have been extremely painful, had the victim bound, one hand was always left free so that the individual may signal their desire to recant, leading to their release.   Despite his suffering, Ruiz refused to renounce Christianity and died from eventual blood loss and suffocation.   His body was cremated, with the ashes thrown into the sea.

According to Latin missionary accounts sent back to Manila, Ruiz declared these words upon his death:

I am a Catholic and wholeheartedly do accept death for God.
Had I a thousand lives, all these to Him shall I offer.

St Lorenzo was Beatified on 18 February 1981, during St Pope John Paul II’s papal visit to the Philippines.   It was the first beatification ceremony to be held outside the Vatican in history.   He was Canonised by the same pope at the Vatican on 18 October 1987, making him the first Filipino saint.   The Canonisation miracle involved the healing Cecily Alegriae Policarpio from cerebral paralysis.