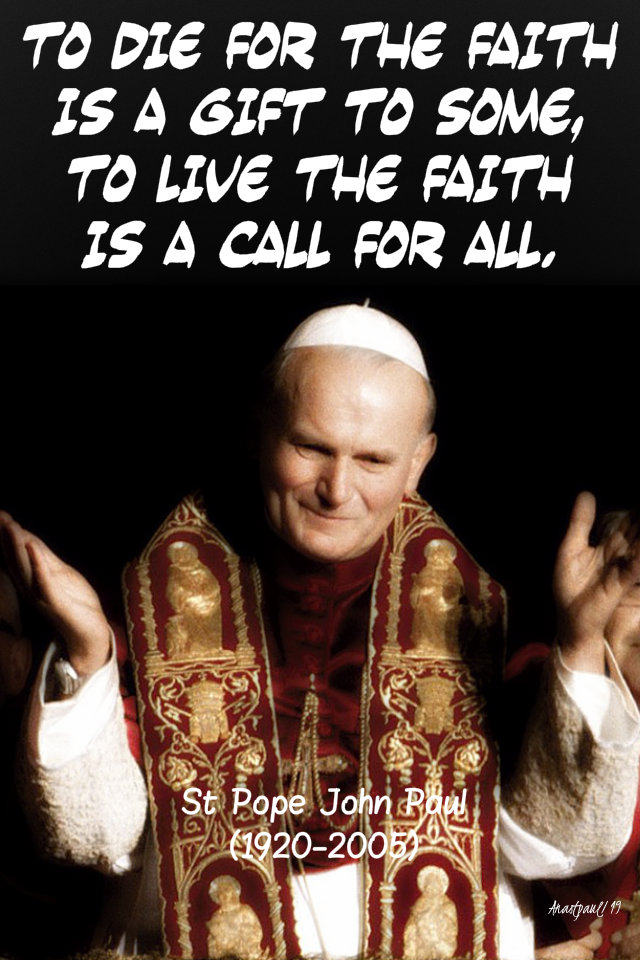 “The Lord Jesus by His blood truly redeemed His servants, gathered from every race, tongue, people and nation, to make them a royal priesthood for our God.   The sixteen blessed martyrs, by the exercise of their priesthood—that of baptism or of Holy Orders—performed the greatest act of worship and love of God by the sacrifice of their blood united with Christ’s own Sacrifice of the Cross.   In this way they imitated Christ the priest and victim in the most perfect way possible for human creatures.   It was at the same time an act of the greatest possible love for their brethren, for whose sake we are all called to sacrifice ourselves, following the example of the Son of God who sacrificed Himself for us.

4. This is what Lorenzo Ruiz did.   Guided by the Holy Spirit to an unexpected goal after an adventurous journey, he told the court that he was a Christian and must die for God and wοuld give his life for him a thousand times!

(Had I many thousands of lives I would offer them all for him.

Never shall I apostatise.

You may kill me if that is what you want.   To die for God—such is my will.)

Here we have him summed up, here we have a description of his faith and the reason fοr his death.   It was at this moment that this young father of a family, professed and brought to completion, the Christian catechesis that he had received in the Dominican Friars’ school in Binondo, a catechesis that cannot be other than Christ-centred, by reason both of the mystery it contains and the fact that it is Christ who teaches through the lips of His messenger.

5. The example of Lorenzo Ruiz, the son of a Chinese father and Tagala mother, reminds us that everyone’s life and the whole of one’s life must be at Christ’s disposal.   Christianity means daily giving, in response to the gift of Christ who came into the world so that all might have life and have it to the full.   Or, as so aptly expressed in the theme of my visit to this country – To die for the faith is a gift to some, to live the faith is a call for all.

Dearly beloved, amidst the efforts needed for our own Christian lives and for spreading the light of Christ throughout Asia and the whole world, let us look today to these zealous martyrs who give us deep assurance and fresh hope when they tell us – “In all this we are more than conquerors because of him who has loved us.”   And this is the mystery we celebrate today – the love of Jesus Christ, who is the light of the world. Amen.”

St Lorenzo Ruiz, Pray for Us!