“You have not only my forgiveness but my thanks.”

Often Our Lord gives His saints a premonition that the curtain is soon to close on their earthly pilgrimage.

Back in September, when he was beginning his Mass for a community of nuns, he asked the angelic flock to pray that God would accept his life as a victim for priests and for the welfare of the Mexican Church.   One of the nuns present, noted, that during the Mass he was totally transported and bathed in tears the whole time they were chanting. At the end of the Holy Sacrifice, he mentioned to someone in the community, “I know not whether it is mere imagination or has actually occurred but I feel clearly,. that Our Lord has evidently accepted my offering.”

One could almost see his mother smiling down upon him from Heaven and repeating those words she had answered him when he was a little boy, “May God hear you, child. But that is too great a happiness for me.”

One of the officers who had captured Father Pro led him out of jail to be executed. He begged Father to forgive him. Miguel put his arm around him and said, “You have not only my forgiveness but my thanks.”   He also softly told the firing squad, “May God forgive you all.”   Then with arms spread as if on a cross, Father Pro shouted, “Viva Cristo Rey – Long live Christ the King!” before a bullet silenced him.

Although the real criminal and one of Miguel’s brothers were also shot, the other brother was pardoned at the last moment. Despite the government’s ban on a public funeral, thousands came to Father Pro’s wake, for the ‘Blood of the Martyrs, is the seedbed of Faith!’

When Fr Miguel Pro was executed in 1927, no one could have predicted that 52 years later the bishop of Rome would visit Mexico, be welcomed by its president and celebrate open-air Masses before thousands of people. St Pope John Paul II made additional trips to Mexico in 1990, 1993, 1999, and 2002. Those who outlawed the Catholic Church in Mexico did not count on the deeply rooted faith of its people and the willingness of many of them, like Miguel Pro, to die as martyrs.

Blessed Miguel, Pray for Us! 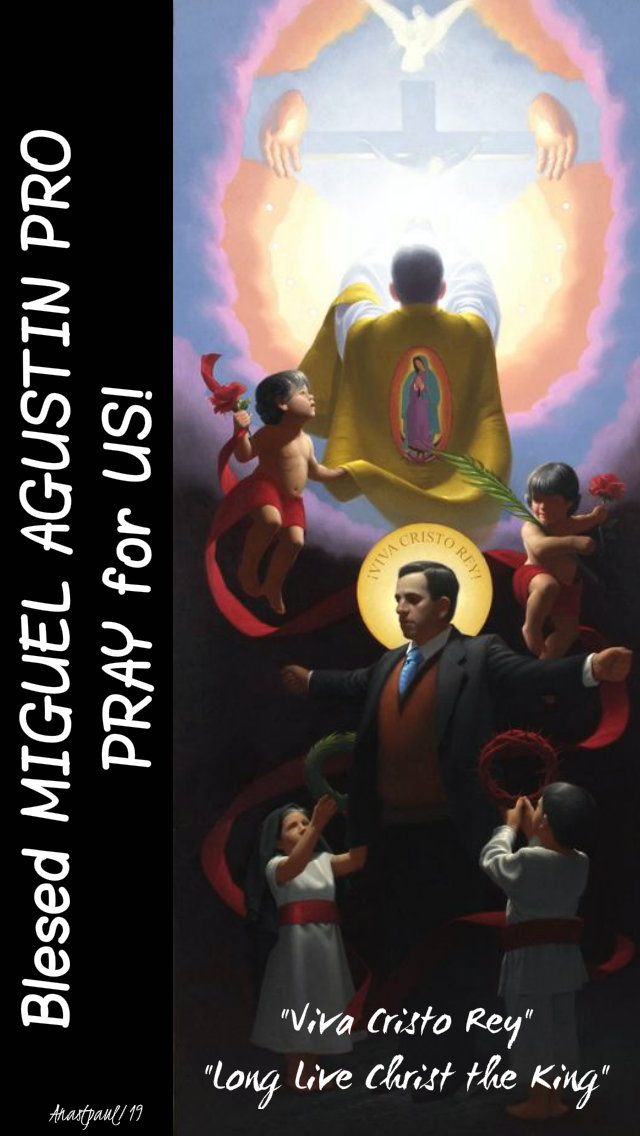 4 thoughts on “Thought for the Day – 23 November – “You have not only my forgiveness but my thanks.””