Woe to Me if I do not Preach the Gospel

An excerpt from Letters to Saint Ignatius

“We have visited the villages of the new converts who accepted the Christian religion a few years ago.   No Portuguese live here—the country is so utterly barren and poor.   The native Christians have no priests.   They know only that they are Christians.   There is nobody to say Mass for them, nobody to teach them the Creed, the Our Father, the Hail Mary and the Commandments of God’s Law.

I have not stopped since the day I arrived.   I conscientiously made the rounds of the villages.   I bathed in the sacred waters all the children who had not yet been baptised. This means that I have purified a very large number of children so young that, as the saying goes, they could not tell their right hand from their left.   The older children would not let me say my Office or eat or sleep until I taught them one prayer or another. Then I began to understand – the kingdom of heaven belongs to such as these.

I could not refuse so devout a request, without failing in devotion myself.   I taught them, first the confession of faith in the Father, the Son and the Holy Spirit, then the Apostles’ Creed, the Our Father and Hail Mary.   I noticed among them persons of great intelligence.   If only someone could educate them in the Christian way of life, I have no doubt, that they would make excellent Christians.

Many, many people hereabouts, are not becoming Christians for one reason only – there is nobody to make them Christians.   Again and again, I have thought of going round the universities of Europe, especially Paris and everywhere crying out like a madman, riveting the attention of those with more learning than charity – “What a tragedy, how many souls are being shut out of heaven and falling into hell, thanks to you!”

I wish they would work as hard at this as they do at their books and so settle their account with God, for their learning and the talents entrusted to them.

This thought would certainly stir most of them to meditate on spiritual realities, to listen actively to what God is saying to them.   They would forget their own desires, their human affairs and give themselves over entirely to God’s will and His choice.   They would cry out with all their heart – Lord, I am here!   What do you want me to do?   Send me anywhere you like—even to India.”

How can we too fail!

It is Advent. All our answers remain fragmentary.
The first thing we have to accept is, ever and again,
the reality of an enduring Advent.
If we do that, we shall begin to realise
that the borderline between “before Christ” and “after Christ”
does not run through historical time, in an outward sense
and cannot be drawn on any map,
it runs through our own hearts.
Insofar, as we are living on a basis of selfishness, of egoism,
then even today, we are “before Christ.”
But in this time of Advent, let us ask the Lord to grant
that we may live less and less “before Christ”
and certainly not “after Christ”
but truly “with Christ and in Christ” –
with Him who is indeed Christ yesterday, today and forever. 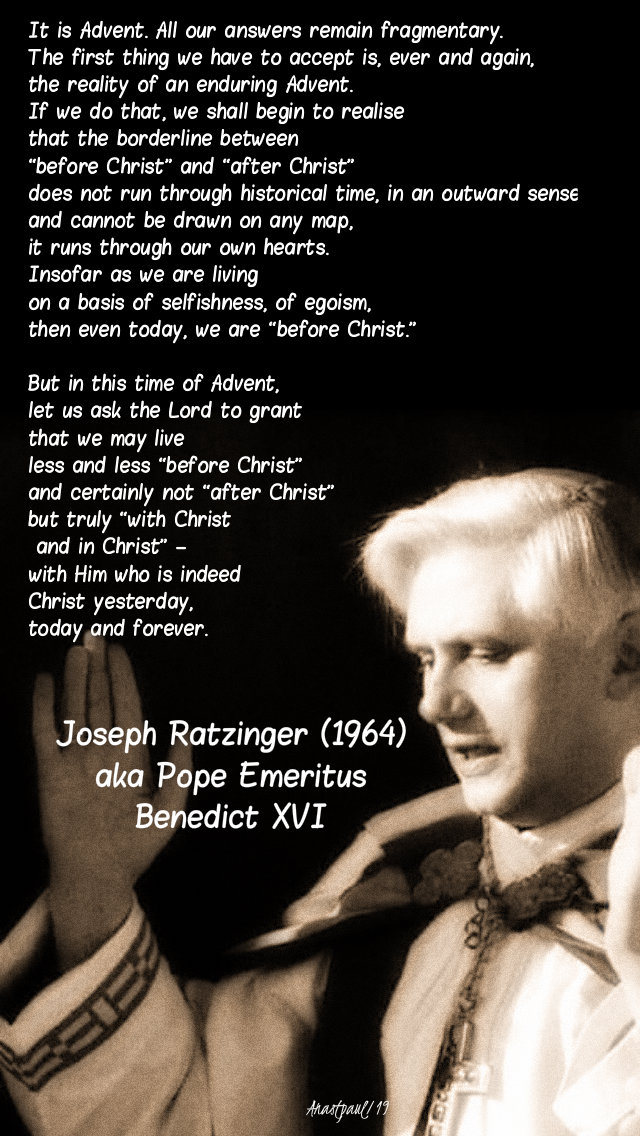