REFLECTION – “Before Abraham was made, I am.”   Recognise the Creator-distinguish the creature.   He who spoke was made the seed of Abraham and that Abraham might be made, He Himself was before Abraham.
Hence, as if by the most open of all insults thrown at Abraham, they were now excited to greater bitterness.   Of a certainty it seemed to them, that Christ the Lord had uttered blasphemy in saying, “Before Abraham was made, I am.”   “Therefore took they up stones to cast at Him.”   To what could so great hardness have recourse, save to its like?   “But Jesus” [acts] as man, as one in the form of a servant, as lowly, as about to suffer, about to die, about to redeem us with His blood, not as He who is-not as the Word in the beginning and the Word with God.   For when they took up stones to cast at Him, what great thing were it had they been instantly swallowed up in the gaping earth and found the inhabitants of hell in place of stones?   It were not a great thing to God but better was it that patience should be commended than power exerted.   Therefore “He hid Himself” from them, that He might not be stoned.   As man, He fled from the stones but woe to those from whose stony hearts God has fled?”… St Augustine (354-430) Father & Doctor 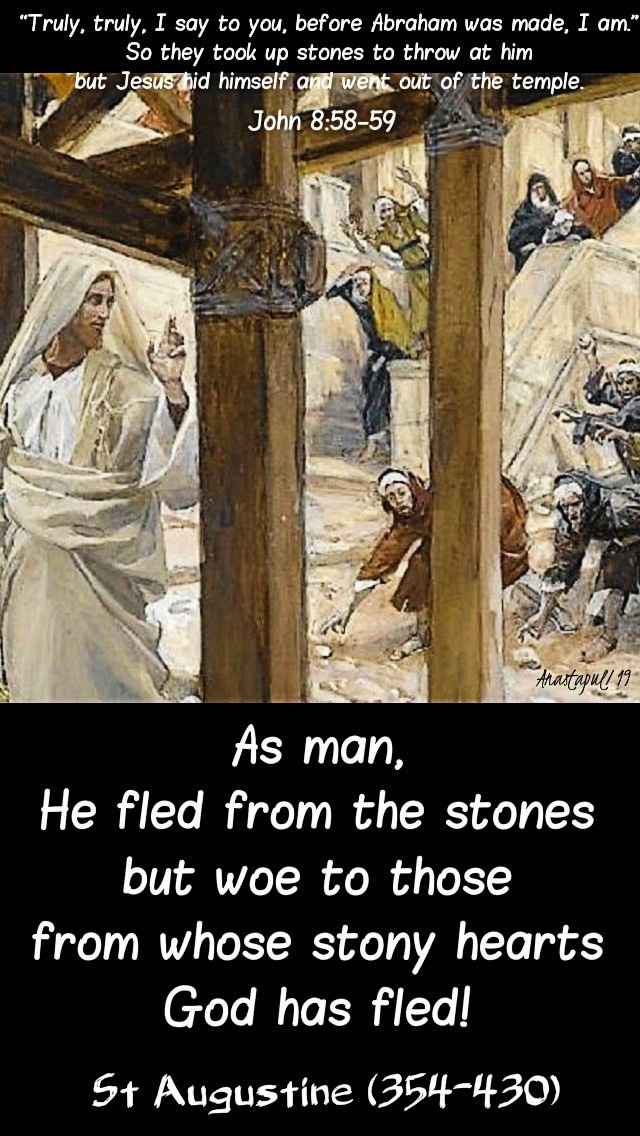 PRAYER – Lord God, break the bonds of our sin which our weakness have forged to enchain us and in Your loving mercy, forgive Your people’s guilt.   Never flee from us in our weakness O Lord and grant us Your salvation.   Help us Holy Mother to be the imitators of your Son.   Through Christ our Lord, with the Holy Spirit, one God for all time and eternity, amen.