Saint of the Day – 22 June – Saint John Fisher (1469-1535) Bishop, Martyr, Cardinal, Theologian, Academic, Writer – born in 1469 at Beverly, Yorkshire, England and died on 22 June 1535, aged 65, on Tower Hill, Tyburn, London, England, by beheading.   Fisher was executed by order of Henry VIII during the English Reformation for refusing to accept him as the supreme head of the Church of England and for upholding the Catholic Church’s doctrine of Papal supremacy.  Patronages – Diocese of Rochester, Catholic students at Cambridge.

He was condemned to be hanged, drawn and quartered at Tyburn, however, a public outcry was brewing among the London populace who saw a sinister irony in the parallels between the conviction of Fisher and that of his patronal namesake, Saint John the Baptist, who was executed by King Herod Antipas for challenging the validity of Herod’s marriage to his brother’s divorcée Herodias.   For fear of John Fisher’s living through his Patronal feast day, that of the Nativity of St. John the Baptist on 24 June and of attracting too much public sympathy, King Henry commuted the sentence to that of beheading, to be accomplished before 23 June, the Vigil of the feast of the Nativity of St John the Baptist.   He was executed on Tower Hill on 22 June 1535. The execution had the opposite effect from that which King Henry VIII intended, as it created yet another parallel with that of the martyrdom of St John the Baptist, who was also beheaded;  his death also happened on the feast day of Saint Alban, the first martyr of Britain.

John Fisher was born in Beverley, Yorkshire, in 1469, the eldest son of Robert Fisher, a modestly prosperous merchant of Beverley and Agnes, his wife.   He was one of four children.   His father died when John was eight.   His mother remarried and had five more children by her second husband, William White.   Fisher seems to have had close contacts with his extended family all his life.   Fisher’s early education was probably received in the school attached to the collegiate church in his home town.

He was educated at Cambridge, from which he received his Master of Arts degree in 1491.  John received a Papal dispensation to enter the Priesthood despite being under canonical age.   He was Ordained into the Priesthood on 17 December 1491 – the same year that he was elected a fellow of his college.  He occupied the vicarage of Northallerton, 1491-1494, then he became Proctor of Cambridge University.   In 1497, he was appointed Confessor to Lady Margaret Beaufort, mother of Henry VII and became closely associated in her endowments to Cambridge with which he created scholarships, introduced Greek and Hebrew into the curriculum and brought in the world-famous Erasmus (1466-1536) to visit Cambridge,  as professor of Divinity and Greek.   As a Catholic priest, Erasmus was an important figure in classical scholarship who wrote in a pure Latin style.

By papal bull dated 14 October 1504, Fisher was appointed the Bishop of Rochester at the personal insistence of Henry VII.   Rochester was then the poorest Diocese in England and usually seen as a first step on an ecclesiastical career.   Nonetheless, Fisher stayed there, presumably by his own choice, for the remaining 31 years of his life.   At the same time, like any English Bishop of his day, Fisher had certain state duties. In particular, he maintained a passionate interest in the University of Cambridge.   In 1504 he was elected the university’s Chancellor.   Re-elected annually for 10 years, Fisher ultimately received a lifetime appointment.   At this date he also acted as tutor to the future King, Henry VIII.

As a preacher his reputation was so great, that Fisher was appointed to preach the funeral oration for King Henry VII and the Lady Margaret, both of whom died in 1509, the texts being extant.   Besides his share in the Lady Margaret’s foundations, Fisher gave further proof of his zeal for learning, by inducing Erasmus.

Despite his fame and eloquence, it was not long before Fisher came into conflict with the new King, his former pupil.   The dispute arose over funds left by the Lady Margaret, the King’s grandmother, for financing foundations at Cambridge. 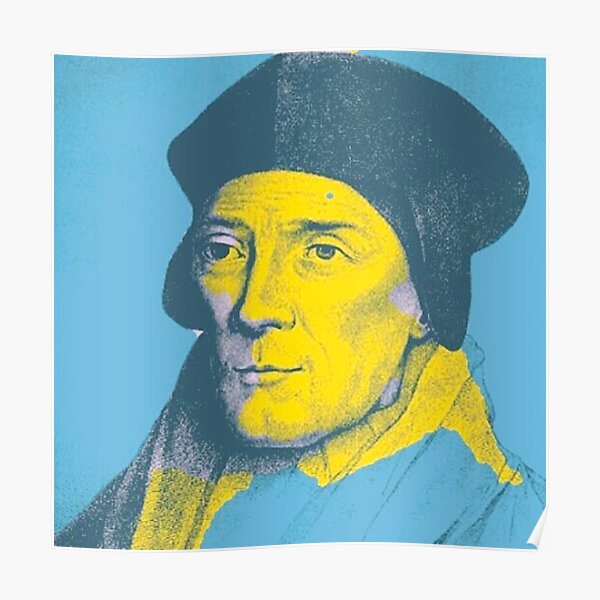 In 1512 Fisher was nominated as one of the English representatives at the Fifth Council of the Lateran, then sitting, but his journey to Rome was postponed, and finally abandoned.

Fisher has also been named, as the true Author of the royal Treatise against Martin Luther entitled “Assertio septem sacramentorum” Defence of the Seven Sacraments, published in 1521, which won for King Henry VIII the title “Fidei Defensor” – Defender of the Faith.   On 11 February 1526, at the King’s command, he preached a famous sermon against Luther at St Paul’s Cross, the open-air pulpit outside St Paul’s Cathedral in London. 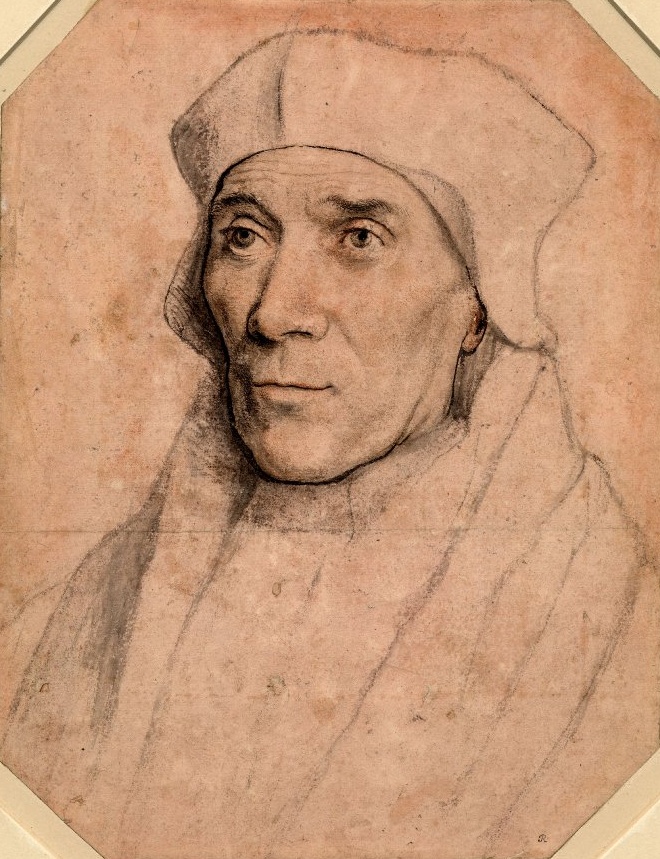 From 1527, this humble servant of God actively opposed the King’s divorce proceedings against Catherine, his wife in the sight of God and steadfastly resisted the encroachment of Henry on the Church.   Unlike the other Bishops of the realm, St John refused to take the oath of succession which acknowledged the issue of Henry and Anne as the legitimate heir to the throne and he was imprisoned in the tower in April 1534.

The next year he was made a Cardinal by Paul III and Henry retaliated by having him beheaded within a month.   A half hour before his execution, this dedicated scholar and churchman opened his New Testament for the last time and his eyes fell on the following words from St John’s Gospel:  “Eternal life is this – to know You, the only true God and Him Whom You have sent, Jesus Christ.   I have given you glory on earth by finishing the work you gave me to do.   Do you now, Father, give me glory at your side.”   Closing the book, he observed:  “There is enough learning in that to last me the rest of my life.”

St John’s last moments were in keeping with his life.   He met death with a calm dignified courage which profoundly impressed those present.  His body was treated with particular rancour, apparently on Henry’s orders, being stripped and left on the scaffold until the evening, when it was taken on pikes and thrown naked into a rough grave in the churchyard of All Hallows’ Barking, also known as All Hallows-by-the-Tower.   There was no funeral prayer.   A fortnight later, his body was laid beside that of Sir Thomas More in the chapel of St Peter ad Vincula within the Tower of London.

A stern and austere man, Fisher was known to place a human skull on the altar during Mass and on the table during meals.   Erasmus said of John Fisher:  “He is the one man at this time, who is incomparable for uprightness of life, for learning and for greatness of soul.”

John was Beatified by Pope Leo XIII with Thomas More and 52 other English Martyrs on 29 December 1886.   In the Decree of Beatification issued on 29 December 1886 by Pope Leo XIII, when 53 English martyrs were Beatified, the greatest place was given to Fisher.   He was Canonised, with Thomas More, on 19 May 1935 by Pope Pius XI.   His feast day, for celebration jointly with St Thomas More, is today, 22 June (the date of St John Fisher’s execution). 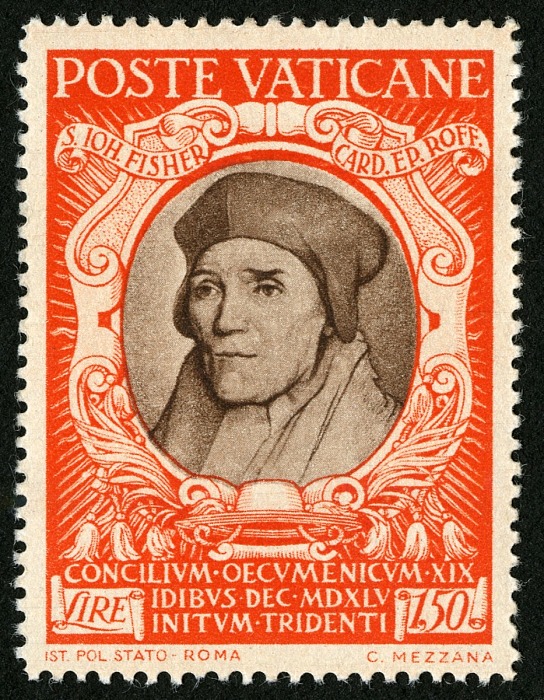