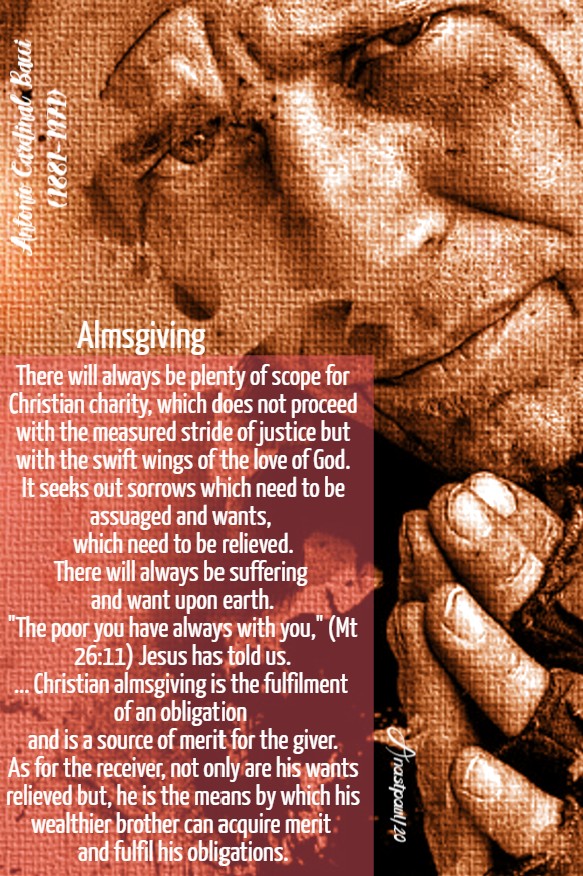 “The view has been expressed, that almsgiving is useless and degrading.
It is useless, it has been said because, the implementation of social justice should be sufficient to provide for the needs of everybody and, it is degrading, it has been held because, it places the poor man in a position of inferiority to the rich man and makes him beg for that which is really his right.

This is a false line of reasoning.
Social justice can and should, do a great deal to achieve a more equal distribution of wealth among men.
But social justice cannot do everything.

Until the end of the world, the weak will always succumb in the battle of life, before the energy and enterprise of the strong.
There will always be unfortunates who, by reason of some tragic accident, are unable to fend for themselves.
No matter what form it takes, the State will not be able to provide fully for the disabled and infirm.

It cannot be said that almsgiving is degrading because it makes the receiver inferior to the giver.
This may be so, if alms are given from motives of mere philanthropy.
But when almsgiving is accompanied by charity and understanding and the donor sees, in the poor man, the person of Jesus Christ, there is no difference of status between the two individuals.
They are brothers who wish to love and help one another …
In this case, it is more blessed to give than to receive.

Christian almsgiving is the fulfilment of an obligation and is a source of merit for the giver.
As for the receiver, not only are his wants relieved but, he is the means by which his wealthier brother can acquire merit and fulfil his obligations.”