The Solemnity of Pentecost +2020
(Under lockdown for many of us!)

St Crescentian of Sassari
St Donatian of Cirta
St Felice of Nicosia
St Galla of Auvergne
St Hermias of Comana
Bl Jacob Chu Mun-mo
Bl James Salomone
St Juan Moya Collado
Bl Kasper Gerarz
St Lupicinus of Verona
St Mancus of Cornwall
Bl Mariano of Roccacasale
St Mechtildis of Edelstetten
St Myrbad of Cornwall
Bl Nicolas Barré
Bl Nicholaus of Vangadizza
Bl Nicholaus of Vaucelles
St Nowa Mawaggali
St Paschasius of Rome
St Petronilla of Rome
Bl Robert Thorpe
St Silvio of Toulouse
Bl Thomas Watkinson
Bl Vitalis of Assisi
St Winnow of Cornwall
—
Martyrs of Aquileia – 3 saints: Three young members of the imperial Roman nobility and who were raised in a palace and had Saint Protus of Aquileia as tutor and catechist. To escape the persecutions of Diocletian, the family sold their property and moved to Aquileia, Italy. However, the authorities there quickly ordered them to sacrifice to idols; they refused. Martyrs all – Cantianilla, Cantian and Cantius. They were beheaded in 304 at Aquae-Gradatae (modern San-Cantiano) just outside Aquileia, Italy.

Martyrs of the Via Aurelia – 4 saints: Four Christians martyred together. No information about them has survived except their names – Justa, Lupus, Tertulla and Thecla. The martyrdom occurred in 69 on the Via Aurelia near Rome, Italy.

Writing in the early 8th century, St Bede explains why the Magnificat, Mary’s prayer on the occasion of her Visitation of Elizabeth, is used daily in the liturgy of the hours (a.k.a the divine office) for Vespers or evening prayer.   With Mary’s soul, our souls magnify the Lord and rejoice in God our Saviour.

My soul glorifies the Lord and my spirit rejoices in God my saviour.
With these words Mary first acknowledges the special gifts she has been given.   Then she recalls God’s universal favours, bestowed unceasingly on the human race.

REJOICE IN GOD’S GREATNESS
When a man devotes all his thoughts to the praise and service of the Lord, he proclaims God’s greatness.   His observance of God’s commands, moreover, shows that he has God’s power and greatness always at heart.   His spirit rejoices in God his saviour and delights in the mere recollection of his creator who gives him hope for eternal salvation.

These words are offered for all God’s creations but especially for the Mother of God.   She alone was chosen and she burned with spiritual love for the son she so joyously conceived.   Above all other saints, she alone could truly rejoice in Jesus, her saviour, for she knew that He, who was the source of eternal salvation, would be born in time in her body, in one person both her own son and her Lord.

HOLY IS HIS NAME
For the Almighty has done great things for me, and holy is his name.
Mary attributes nothing to her own merits.   She refers all her greatness to the gift of the one whose essence is power and whose nature is greatness, for He fills with greatness and strength the small and the weak who believe in Him.

She did well to add:  and holy is his name, to warn those who heard and indeed all who would receive His words, that they must believe and call upon His name.   For they too could share in everlasting holiness and true salvation, according to the words of the prophet – and it will come to pass, that everyone who calls on the name of the Lord will be saved.   This is the name she spoke of earlier – and my spirit rejoices in God my saviour.

VESPERS & THE MAGNIFICAT:  AN EVENING CANTICLE
Therefore it is an excellent and fruitful custom of holy Church that we should sing Mary’s hymn at the time of evening prayer.   By meditating upon the incarnation, our devotion is kindled and by remembering the example of God’s Mother, we are encouraged to lead a life of virtue.   Such virtues are best achieved in the evening.  We are weary after the day’s work and worn out by our distractions.   The time for rest is near and our minds are ready for contemplation.

The great canticle by the Blessed Virgin Mary, the Magnificat, proclaimed by Mary during her Visitation to St Elizabeth,  is celebrated and explained in this excerpt from a homily by Saint Bede the Venerable (Lib 1,4:CCL 122, 25-26, 30) which is used in the Roman Catholic Liturgy’s Divine Office of Readings for the Feast of the Visitation, 31 May, with the accompanying biblical reading being from Song of Songs 2:8-14 and 8:6-7.   With Mary’s soul, we proclaim the greatness of the Lord and rejoice in God, her Saviour and ours, each evening in Vespers prayer.

Mary, Mother of God, Pray for us!

St Elizabeth, Pray for us!

The Magnificat, is Mary’s great gift to scripture, one of its most beautiful prayers.   It is prayed every evening in the Liturgy of the Hours by millions around the world.   With that, Mary’s great acclamation becomes the Church’s.

The Magnificat
The Canticle of Mary
Luke 1:46-55

My soul glorifies the Lord,
my spirit rejoices in God, my Saviour
He looks on His servant in her lowliness
Henceforth all ages will call me blessed:
The Almighty works marvels for me,
holy is his Name!
His mercy is from age to age,
on those who fear Him.
He puts forth His arm in strength
and scatters the proud-hearted.
He casts the mighty from their thrones
and raises the lowly.
He fills the starving with good things,
sends the rich away empty.
He protects Israel, His servant,
remembering His mercy,
the mercy promised to our fathers,
to Abraham and his sons forever.

“18.   Mary is also the Virgin in prayer.   She appears as such in the visit to the mother of the precursor, when she pours out her soul in expressions glorifying God and expressions of humility, faith and hope.   This prayer is the Magnificat (cf. Lk. 1:46-55), Mary’s prayer par excellence, the song of the messianic times in which there mingles the joy of the ancient and the new Israel.   As St Irenaeus seems to suggest, it is in Mary’s canticle, that there was heard once more, the rejoicing of Abraham who foresaw the Messiah (cf. Jn. 8:56)(48) and there rang out in prophetic anticipation the voice of the Church:  “In her exultation Mary prophetically declared in the name of the Church:  ‘My soul proclaims the glory of the Lord….'”

And in fact Mary’s hymn has spread far and wide and has become the prayer of the whole Church in all ages.” 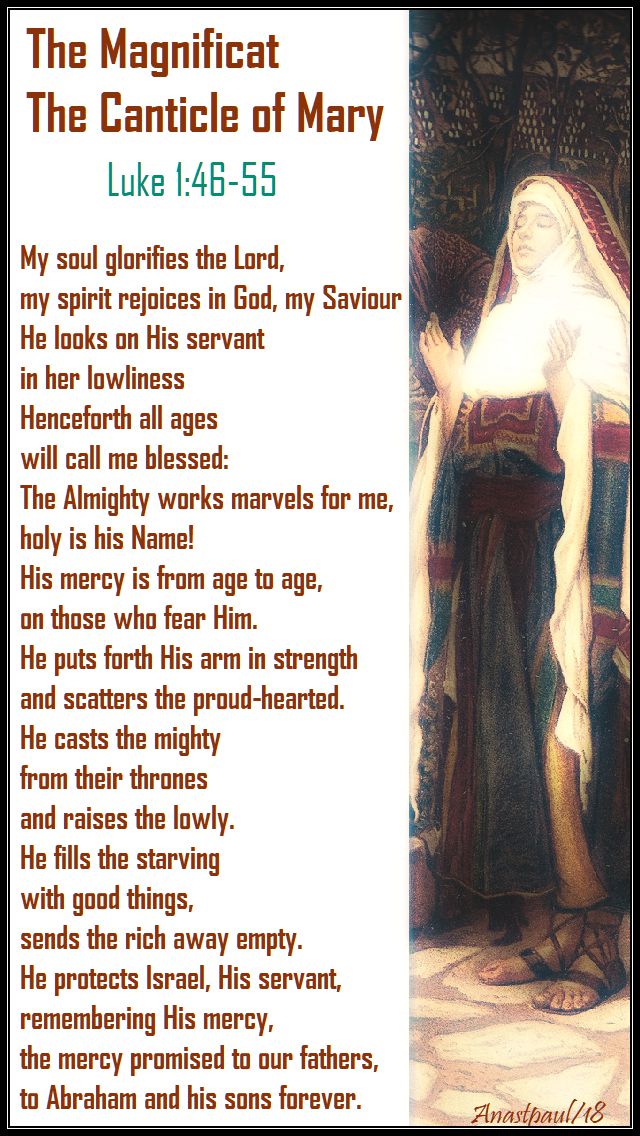 As we say goodbye to Mary’s Month of May, we celebrate today the feast of the Visitation of the Blessed Virgin Mary.   This feast celebrates the visit of Mary, the Mother of God, with the child Jesus in her womb, to her cousin Elizabeth.   The visit took place when Elizabeth was herself, six months’ pregnant, with the forerunner of Christ, Saint John the Baptist.   At the Annunciation of the Lord, the angel Gabriel, in response to Mary’s question “How shall this be done, because I know not man?” (Luke 1:34 ), had told her that “thy cousin Elizabeth, she also hath conceived a son in her old age; and this is the sixth month with her that is called barren: Because no word shall be impossible with God” (Luke 1:36-27).

The evidence of her cousin’s own near-miraculous conception had called forth Mary’s fiat:  “Behold the handmaid of the Lord; be it done to me according to thy word.”   It is thus appropriate, that the very next action of the Blessed Virgin, that Saint Luke the Evangelist records, is Mary’s “making haste” to visit her cousin.

The Significance of the Visitation
Arriving at the house of Zachariah and Elizabeth, Mary greets her cousin and something wonderful happens:  John the Baptist leaps in Elizabeth’s womb (Luke 1:41).   As the Catholic Encyclopedia of 1913 puts it in its entry on the Visitation, the Virgin Mary’s “presence and much more the presence of the Divine Child in her womb, according to the will of God, was to be the source of very great graces to the Blessed John, Christ’s Forerunner.”

The Cleansing of John the Baptist From Original Sin
John’s leap was no ordinary movement of an unborn child, for as Elizabeth tells Mary, “as soon as the voice of thy salutation sounded in my ears, the infant in my womb leaped for joy” (Luke 1:44).   The joy of John the Baptist, the Church has held from the time of the early Church Fathers, came from his cleansing at that moment of Original Sin, in accordance with the angel Gabriel’s prophecy to Zachariah, before John’s conception, that “he shall be filled with the Holy Ghost, even from his mother’s womb” (Luke 1:15).   As the Catholic Encyclopedia notes in its entry on St John the Baptist, “as the presence of any sin whatever is incompatible with the indwelling of the Holy Ghost in the soul, it follows that at this moment John was cleansed from the stain of original sin.”

The Origin of Two Great Catholic Prayers
Elizabeth, too, is filled with joy and cries out in words that would become part of the chief Marian prayer, the Hail Mary:  “Blessed art thou among women, and blessed is the fruit of thy womb.”   Elizabeth then acknowledges her cousin Mary as “the mother of my Lord” (Luke 1:42-43).   Mary responds with the Magnificat (Luke 1:46-55), a canticle or biblical hymn that has become an essential part of the Church’s evening prayer (vespers). It is a beautiful hymn of thanksgiving, glorifying God for choosing her to be the mother of His Son, as well as for His mercy “from generation until generations, to them that fear Him.”

The History of the Feast of the Visitation of the Blessed Virgin Mary
The Visitation is mentioned only in Luke’s Gospel and Luke tells us that Mary stayed with her cousin about three months.   The angel Gabriel, as we have seen, told Mary at the Annunciation that Elizabeth was six months pregnant and Luke seems to indicate that the Blessed Virgin departed for her cousin’s home very soon after the Annunciation.

While many Marian feasts are among the first feasts to have been celebrated universally by the Church, East and West, the celebration of the Visitation, even though it is found in Luke’s Gospel, is a relatively late development.   It was championed by Saint Bonaventure and adopted by the Franciscans in 1263.   When it was extended to the universal Church by Pope Urban VI in 1389, the date of the feast was set as July 2, the day after the octave (eighth) day of the feast of the Birth of Saint John the Baptist.   The idea was to tie the celebration of the Visitation, at which Saint John had been cleansed of Original Sin, to the celebration of his birth, even though the placement of the feast in the liturgical calendar was out of sync with the account given by Luke.   In other words, symbolism, rather than chronology, was the deciding factor in choosing when to commemorate this important event.

For close to six centuries, the Visitation was celebrated on July 2, but with his revision of the Roman calendar in 1969, Pope Paul VI moved the celebration of the Visitation of the Blessed Virgin Mary to the last day of the Marian month of May so that it would fall between the feasts of the Annunciation and the Birth of Saint John the Baptist—a time when Luke tells us that Mary would certainly have been with Elizabeth, taking care of her cousin in her time of need. 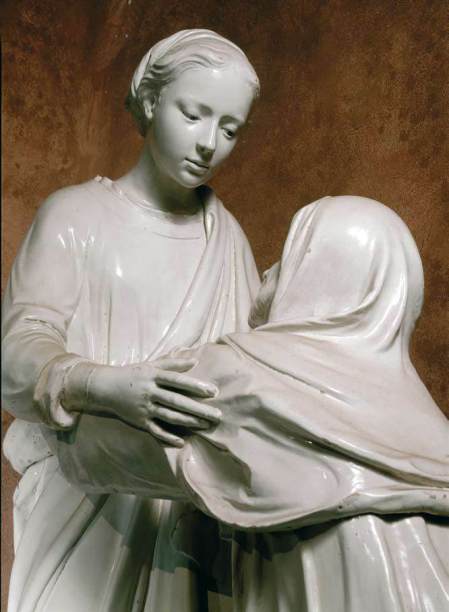 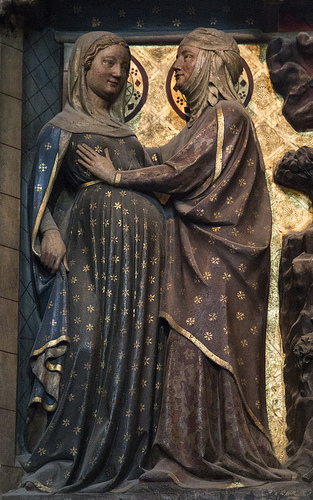