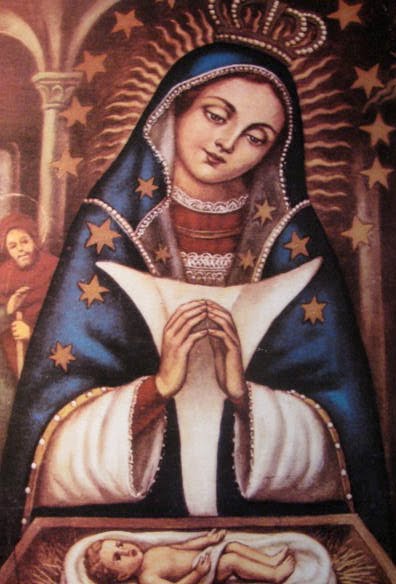 Today, 25 June, we celebrate the feast day of Saint William of Vercelli (1085-1142), founder of the Order of Monte Vergine, also known as the “Williamites.”   Saint William lived a quiet life of solitude and contemplation, listening intently for the voice of God and following the directions he received.   Through his obedience, William was taken far from home, worked many miracles and established a thriving religious community—all because he was quiet and paused to discern the Will of the Lord.
Saint William had complete trust in the Lord and in His Divine Providence.   Ever faithful and contemplative, William was willing to leave his home as a youth and subsequently leave the community he had built with his own hands in service to God.   Patient, humble and obedient, Saint William of Vercelli put the Lord’s work above his own desires at every moment of his life.   His great devotion to Our Lady, was a source of immense comfort and trust in the holy Mother of God, who he knew would lead him to her Son. We could do well by observing Saint William’s confidence in the Divine Providence and striving to imitate him by creating quiet moments in our own lives for prayer, reflection and contemplation.   It is in those moments that the Divine Plan for our own lives quietly unfolds…… if we listen.

St William of Vercelli and Monte Vergine, please pray for us!

Blessed be God the Father . who gave us a new birth to a living hope…..to an inheritance that is imperishable, undefiled and unfading, kept in heaven for you………1 Peter 1:3-4

REFLECTION – “You have within you, everything that you need to purchase the kingdom of heaven.
Joy will be purchased by your sorrow,
rest by your labour,
glory by your humiliation
and eternal life by your passing death.”………………….St Augustine 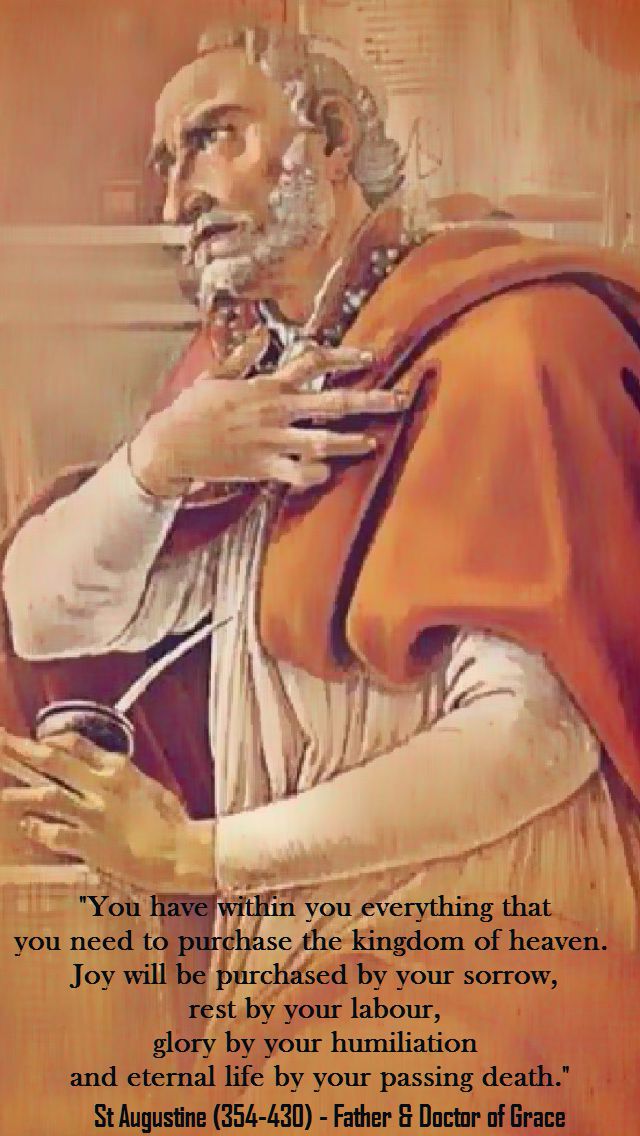 PRAYER – Loving Father,. teach me how to make every event on earth lay up treasures for me in heaven. Help me to endure sorrows, labour, humiliations, pain and death willingly so as to attain heaven with You, in unity with Your Son, Lord Jesus Christ and the Holy Spirit, one God forever and ever. St William of Vercelli, your life was a focused gift to God, pray for us that we too may join you in eternal life. Amen 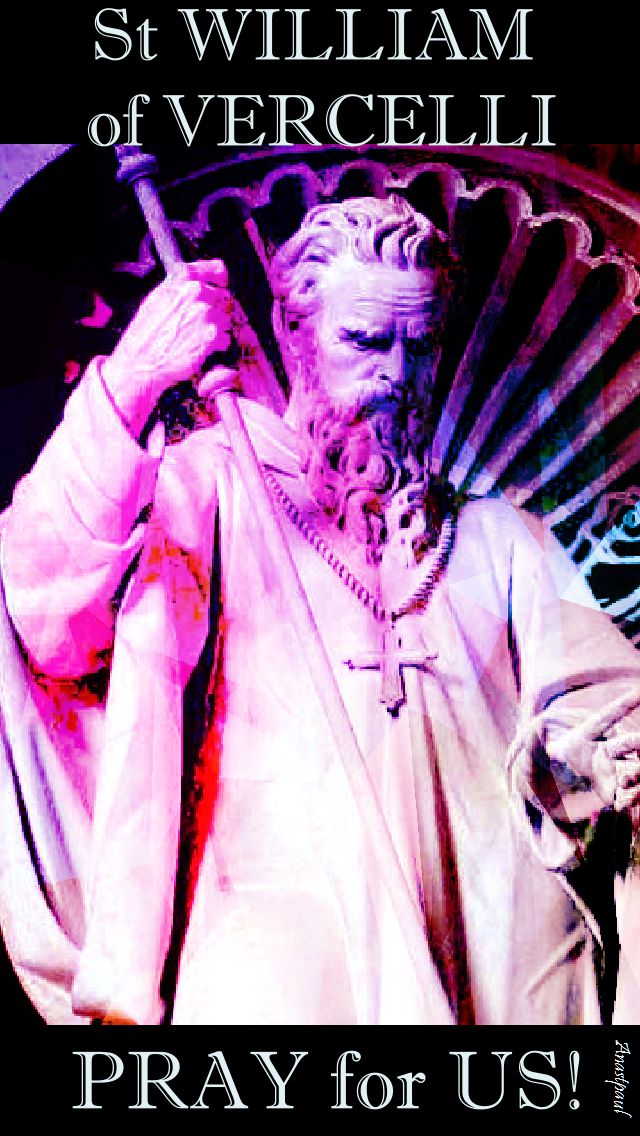 Saint of the day – 25 June – St William of Vercelli OSB (1085 at Vercelli, Italy – 25 June 1142 at Guglietto, Italy of natural causes)  Hermit, Abbot, Founder of the Congregation of Monte Vergine, or “Williamites,” miracle-worker, Marian devotee.   Also known as William of Monte Vergine.   Patronage – Irpinia, Italy.   Attributes –  pilgrim, usually near Santiago de Compostela, Spain, abbot near a wolf wearing a saddle, receiving an appearance by Christ, saddling a wolf that killed his donkey, wolf.   His Body is incorrupt.   The Statue below is the Founder Statue at St Peter’s Basilica.

St William was born to nobility in Vercelli, Italy and was orphaned at a young age when both his parents were killed.   Subsequently raised by a pious family member, William matured into a contemplative young man with only one desire—to devote his life to the Lord.   At the young age of 15, William left home, setting out on pilgrimage to Santiago de Compostela, Spain.   As the journey was not difficult enough for him, he encircled his legs with tight iron bands, causing pain and making walking difficult, his suffering bringing him closer to God.   Upon arrival, he worked many miracles including the healing of a blind man through prayer and, subsequently, felt called to journey to the Holy Land.   However, soon after departing, he was set upon by thieves and following that encounter, felt the Will of God calling him to Italy.

Saint William retired to Monte Vergiliano (today known as Monte Vergine, named for Our Blessed Mother) and became a hermit.   There, he spent his days in prayer, fasting and contemplation of the Lord.   Especially devoted to the Blessed Virgin Mary, he began construction of a Church in her honour, mining the rocks from the mountain by hand with the assistance of a lone donkey. 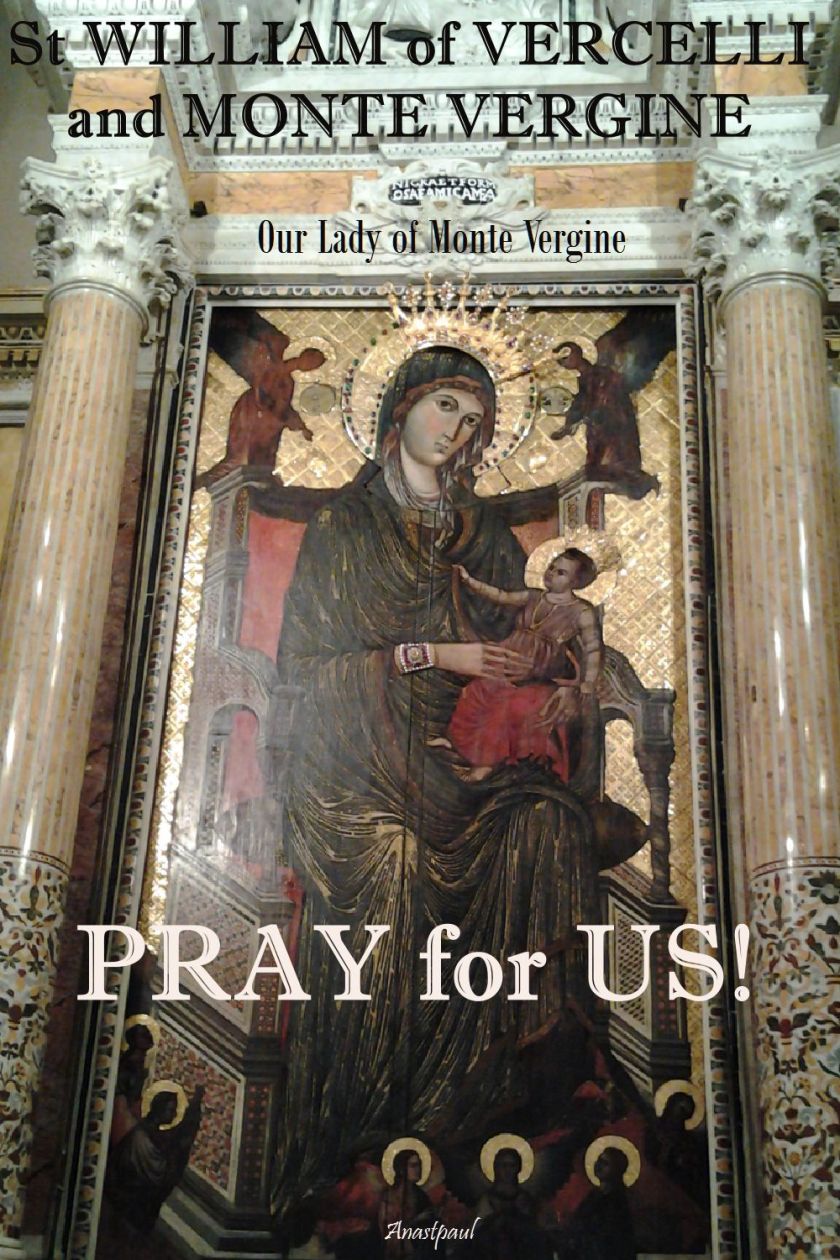 As holy legend tells us, one evening, the donkey was killed and eaten by a wolf.   Saint William called the wolf to him, ordering it to take the donkey’s place.   The wolf, bowing in respect and realising that it had interrupted the work of God, immediately took up the task of dragging rocks from the quarry.   The faithful who continue to travel on pilgrimage to Monte Vergine report that the wolf is still spotted today, visible to those who call upon the name of the Blessed Virgin. 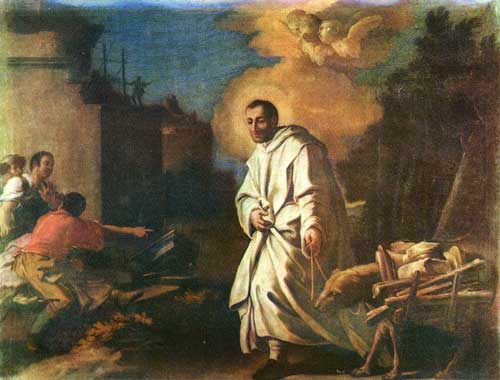 Eventually, due to his working of more miraculous cures (none of which he sought credit for), the faithful began seeking William out on his mountain.   His reputation for holiness attracted many disciples, both men and women, and he founded the Order of Mount Vergine—a religious community with strict rules of austerity.   William and the nuns and monks of his order lived in peace and contemplation for some time, until the members of the order began complaining that William’s rules of poverty, fasting and penance were too extreme.  There is evidence of heavenly support for the austerities of William’s rule.   For example, William did not permit the order to eat meat, eggs, milk or cheese.   If someone tried to violate this regulation, storm clouds would appear in the sky and the lightning would destroy the illicit foodstuff that had been brought into the monastery.

With the members of the Order growing more disgruntled, William humbly removed himself from the situation to remove controversy and ensure the future of the order.    He travelled to Naples, where he served as adviser to the King Roger I and established several more monasteries.

Saint William died of natural causes at the Guglielmo monastery near Nusco, Italy, where he was buried.   Church tradition holds that William predicted the date and time of his death and went to meet his Maker with peace and joy.   At the time of his death, he had not yet written a Rule for his religious to govern their affairs.   His successor, fearing the dissolution of a community without constitutions, placed them under the Rule of Saint Benedict.   The community, which continues to exist today, now belongs to the Benedictine congregation of Subiaco and has a much venerated picture of our Lady of Constantinople, to which pilgrimages are frequently made by the faithful.   While Benedictine monks generally wear black robes, the Monks who reside at Monte Vergine today continue to wear the white robes of the Williamites.