Memorial of The Passion of Saint John the Baptist (Memorial)
Here: https://anastpaul.com/2017/08/29/saint-of-the-day-the-beheading-of-st-john-the-baptist-29-august/

“O great and admirable mystery!
He must increase but I must decrease, said John,
said the voice which personified all the voices
that had gone before announcing
the Father’s Word Incarnate in His Christ….
But He is said to grow in us, when we grow in Him.
To him, then, who draws near to Christ,
to him who makes progress in the contemplation of wisdom,
words are of little use, of necessity they tend to fail altogether.
Thus, the ministry of the voice falls short,
in proportion as the soul progresses towards the Word,
it is thus, that Christ must increase and John decrease.
The same is indicated by the beheading of John
and the exaltation of Christ upon the Cross,
as it had already been shown by their birthdays –
for, from the birth of John the days begin to shorten
and from the birth of Our Lord they begin to grow longer.” 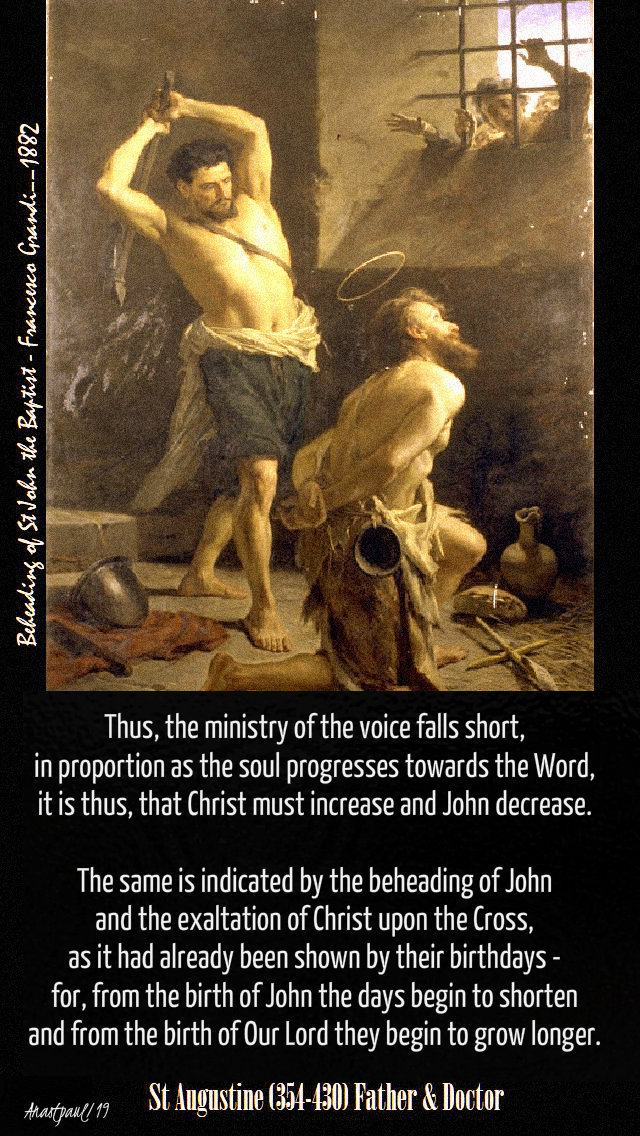 “God’s will is my will.
Whatever He wants I want.”

Saint of the Day – 29 August – Blessed Sancja Szymkowiak CMBB (1910-1942) aged 32 professed religious from the Daughters of the Sorrowful Mother of God, commonly known as the “Seraphic Sisters”.   Born on 11 July 1910 in Mozdzanów, Wielkopolskie, Poland as Janina “Giannina” Szymkowiak and died on 29 August 1942 in Poznan, Wielkopolskie, Poland of tuberculosis of the pharynx.   Patronages – Labourers and Translators.

Bl Sancja Szymkowiak, was born on 11 July 1910 in Mozdzanów (Ostrów Wielkopolski), Poland, to Augustine and Mary Duchalska.   She was the youngest of five children, her parents’ only girl.   She was baptised “Giannina.”   On 29 August 1942, she died of tuberculosis of the pharynx, brought on by the hardships of the war.   Throughout her life, she desired to become a saint in a “hidden way” and wanted only to do God’s will, living a profound union with Him in every event.

Her motto was “God’s will is my will.   Whatever He wants I want”.   By abandoning herself into the arms of a loving Father, she offered a wonderful example of serene acceptance of her sufferings.

Education:
Giannina was born into a believing and well-to-do family, who gave her a wonderful education.   In 1929, after her high school studies, she studied Languages and Foreign Literature at the University of Poznan.   During her school years, she was an attractive person because she was a happy and joyful person who thought of those around her and was generous in reaching out to them in any need.   Throughout her school years, she was a member of the Sodality of Mary and was remembered for a discrete and effective apostolate of trying to share her happiness with those around her.

Giannina also went beyond her own circles and showed a special attention to the needs of the poor of the city.   She was interested in everyone, was open to others and had a “spirit of holiness” that struck those around her.

Call to religious life:
While still young, Giannina felt called to the religious life.   During the summer of 1934, she went on a pilgrimage to the Shrine of Lourdes, France and here offered herself to the Blessed Virgin, wanting to put her life entirely and without reserve into the hands of the Mother of God.   In June 1936, at Poznan, after spending a year with the Congregation of the Oblate Sisters of the Sacred Heart at Montluçon, she returned to Poland and entered the Congregation of the Daughters of Our Lady of Sorrows, better known as the “Seraphic Sisters.”   It was then that she received the name Mary Santia or Sancja in Polish.   From the beginning, she was zealous in observing the rules of the Congregation and in performing every kind of service.   Her life, which apparently had nothing extraordinary about it, hid a profound union with God with a total readiness to embraceHhis will in everything.   She desired to become a great saint and all her life tended to communion with Jesus, ready to bear any sacrifice and humiliation to console His Heart and make reparation for sin.

First Vows and apostolate:
On 30 July 1938 she made her first vows.   She once wrote in her diary:  “Jesus wants me to be a holy religious and He will not be happy with me until I use all my strength for Him and become a saint.   God is everything, I am nothing.   I have to become a saint at all costs.   This is my constant preoccupation”.

After her first vows, Sr Sancja worked for a year in the nursery school of Poznan-Naramowice and also began a course of studies in pharmacology.   However, she was unable to continue her studies, because in September 1939 the war broke out. 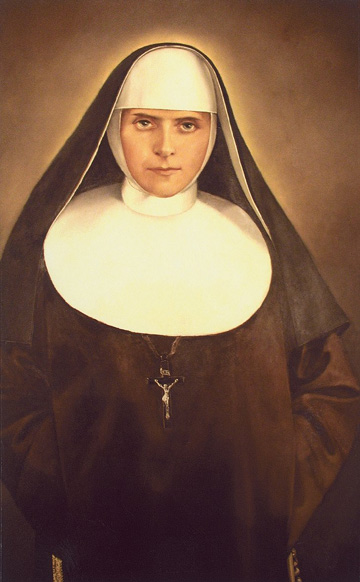 World War II:
Poznan was occupied by the Germans and the sisters were put under house arrest.   They were forced to look after a hundred German soldiers who were housed there and English and French prisoners of war, who were lodged in and around the convent.   She was able to translate for the foreign prisoners.   The forced labour was very difficult but she was willing to serve everyone as she would Christ Himself.

In February 1940, the religious persecution worsened and Sr Sancja was given permission to return to her family for safety.   However, she stayed in the convent and submitted to the hard labour imposed by the occupying forces.   She believed it was God’s will that she remain, that she be a “mother” to those around her – the prisoners, the soldiers and her own sisters.   Sr Sancja was an instrument of God’s love and peace and became a sign of hope to those around her.   The English and French prisoners called her the “angel of goodness” and “Saint Sancja”.

The constant fatigue and difficult conditions took their toll on Sr Sancja and she began showing symptoms of tuberculosis.   She continued with the same spirit of abandonment and serenity and accepted her sufferings as a “preparation” for her solemn vows, which she professed on 6 July 1942  . She died a little more than a month later, on 29 August 1942, when she was 32 years old. … Vatican.va

Bl Sancja’s sainthood cause commenced under St Pope Paul VI on 24 March 1968 when she became titled as a Servant of God and St Pope John Paul named her as Venerable, upon the confirmation of her heroic virtue – on 18 December 2000 he presided over her Beatification on 18 August 2002 at Krakow, Poland. 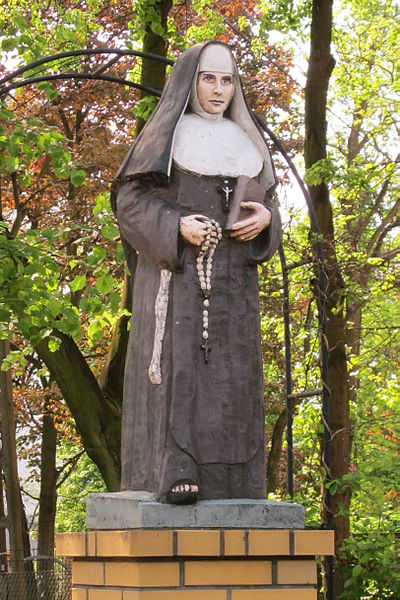 O God, You made Blessed Sancja, who lived, imitating the meek and humble Heart of Jesus, unite with You in perfect love, grant that we, following her path, may reach sainthood.   Through our Lord Jesus Christ, your Son, who lives and reigns with you in the unity of the Holy Spirit, one God, forever and ever. Amen.