REFLECTION – “What, dearest brethren do you notice in this passage? Do you think that it happened by chance that this chosen disciple was absent at that time and afterwards coming, heard the news and hearing, doubted that doubting, he touched and touching, he believed? This did not happen by chance but by Divine dispensation. For the Divine clemency brought it about, in a wonderful way that the doubting disciple, while touching the wounds in his Master’s flesh, should thereby heal the wounds of our unbelief. The unbelief of Thomas is more to our faith, than the faith of the believing disciples. While he is brought back to faith by touching, our minds are set free from doubt and established in the faith.

So the Lord indeed, after His Resurrection permitted His disciple to doubt but He did not leave him in unbelief; just as before His birth, He wished Mary to have a spouse, who, however, never attained to the married state. The disciple who doubted and touched his Risen Lord, thus became, a witness to the truth of the Resurrection, just as the spouse of His Mother was the guardian of her inviolate Virginity. Thomas touched and cried out: My Lord and my God. Jesus said to him – Because you have seen me, you have believed. But since the Apostle Paul says – Now faith is the substance of things to be hoped for, the evidence of things which appear not; it is certainly clear that faith is the evidence, of those things which cannot appear. The things which appear are the object, not of faith but of knowledge.

Why then is it said to Thomas, who saw and touched – Because thou hast seen Me, thou hast believed? But he saw one thing and believed another. Indeed, mortal man cannot see the Divinity. So Thomas saw a Man and confessed Him to be God, saying: My Lord and my God. He, therefore, believed through seeing, for, looking upon One Who was truly Man, he cried out that this was God, Whom he could not see! The words which follow are cause of great joy to us: Blessed are they who have not seen and have believed. These words are meant especially for us, who cherish, in our minds, Him, Whom we do not see in the flesh. They are meant for us but only if we carry out our faith in works. For he truly believes, who puts his faith into practice!” – St Gregory the Great (540-604) Pope. Father and one of the original four Doctors of the Latin Church (Sermon on the Feast of St Thomas).

PRAYER – O Lord, grant us, we beseech Thee, to glory in the Feast-day of blessed Thomas, Thy Apostle, that we maybe helped continually by his patronage and imitate his faith with a devotion like his. .Through Jesus Christ, Thy Son our Lord, Who lives and reigns with Thee, in the unity of the Holy Ghost, God, world without end. Amen (Collect).

Jesus said to him,
“Have you come to believe because you have seen me?
Blessed are those who have not seen and have believed.”

“For by your doubting,
I am taught to believe,
by your forked-tongue,
that revealed the Wound
on the Divine Body that was pierced,
I harvest the fruit for myself, without pain!”

“I believe
though I do not comprehend
and I hold by faith,
what I cannot grasp
with the mind.”

“Believing is
an act of the intellect
assenting to the divine truth,
by command of the will,
moved by God through grace.”

REFLECTION – “There was a wonderful providence behind these words of the Saviour and they can be of very great help to us. They show, once again, how much He cares for our souls, for He is good and| as Scripture says: “He wants everyone to be saved and to come to knowledge of the truth” (1Tm 2,4).

Even so, this saying of His may surprise us. As always, Christ had to be patient with Thomas, when he said he would not believe and, with the other disciples too, when they thought they were seeing a ghost! Because of His desire to convince the whole world, He most willingly showed them the marks of the nails and the wound in His side; – because He wished those, who sought this evidence, as a support for their faith, to have no possible reason for doubt – He even took food, although He had no need for it (Lk 24,41)…

But when anyone accepts what he has not seen, believing on the word of his teacher, the faith, by which he honours the One his teacher proclaims to him, is worthy of great praise. Blessed, therefore, is everyone who believes the message of the holy Apostles who, as Saint Luke says, were eyewitnesses of Christ’s actions and “ministers of the word” (Lk 1,2). If we desire eternal life and long for a dwelling place in heaven, we must listen to them.” – St Cyril of Alexandria (380-444), Bishop, Father and Doctor of the Church – Commentary on Saint John’s gospel, 12, 22

PRAYER – Father, let our celebration on the feast of Saint Thomas the Apostle, be the source of his unfailing help and protection. Fill us with Your life-giving grace through our faith in Your Son, Jesus the Christ, whom Thomas acknowledged to be his Lord and his God. We make our prayer, through our Lord Jesus in union with the Holy Spirit, one God with You, forever and ever, amen. 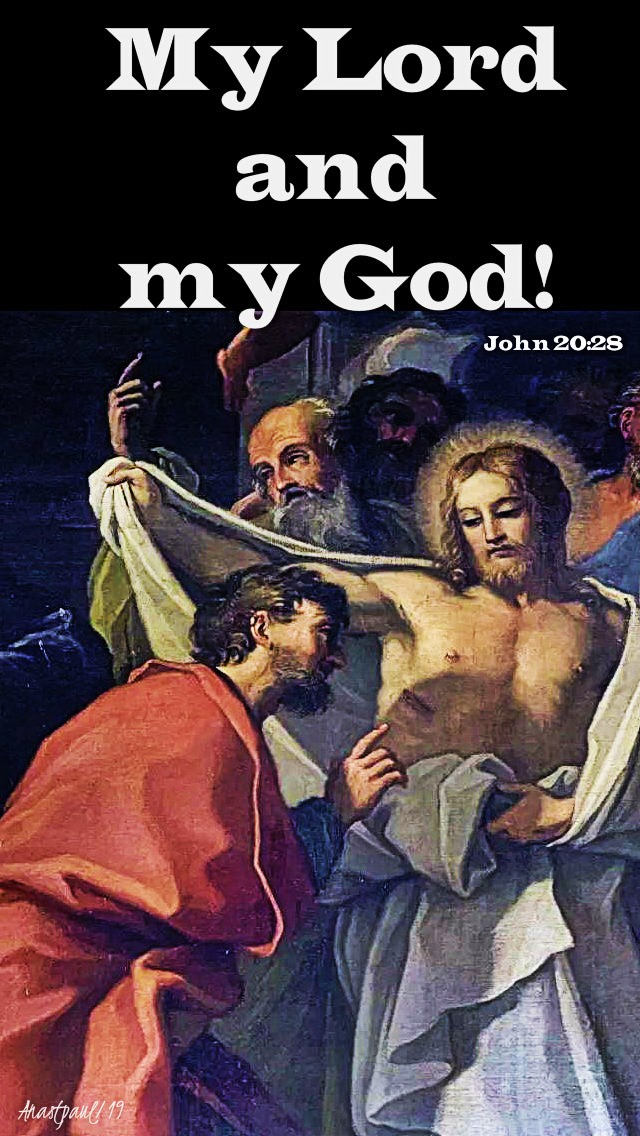 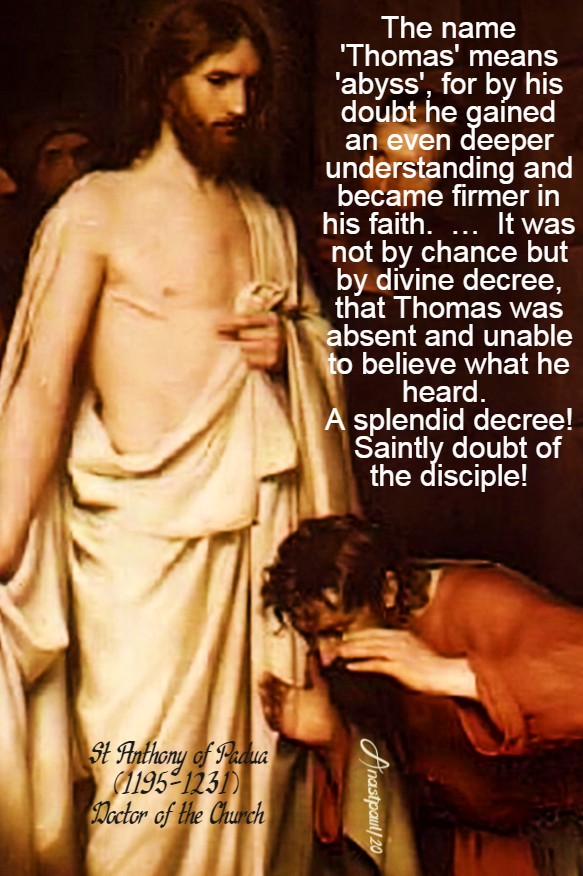 PRAYER – Almighty Father,as we honour Thomas the Apostle, let us always experience the help of his prayers. May we have eternal life by believing in Jesus, whom Thomas acknowledged as Lord, for He lives and reigns with You and the Holy Spirit, one God, forever and ever. Amen 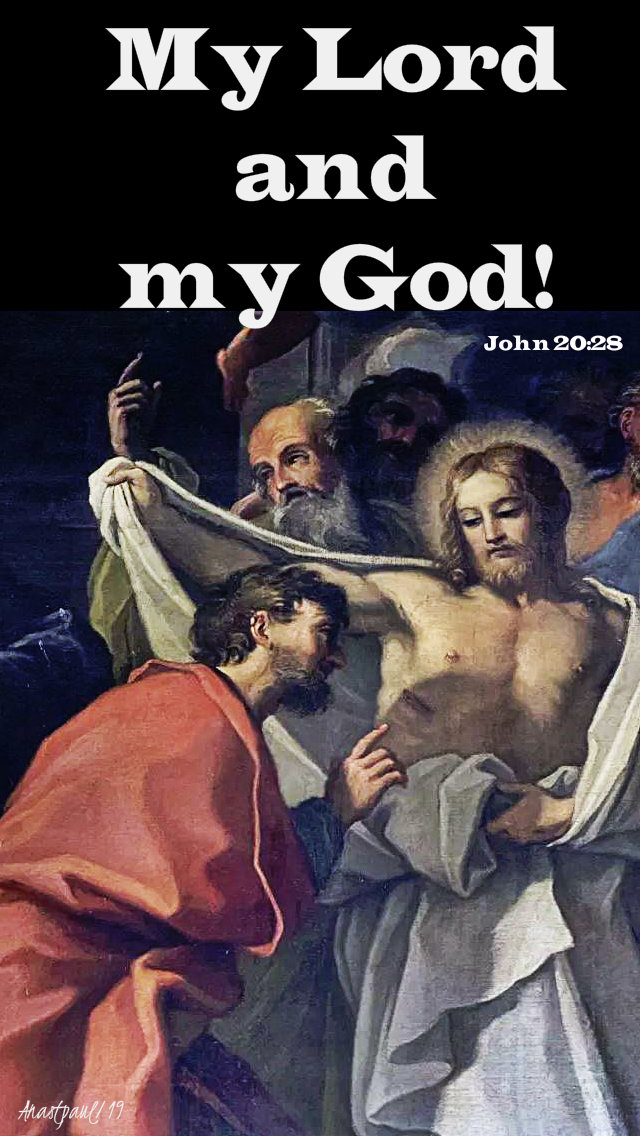 REFLECTION – “Put your finger into the marks of the nails”.   You looked for Me when I wasn’t there, now take advantage of it.   I understand your desire despite your silence. Before you tell Me them I already know your thoughts.   I heard you speak and, even though unseen, I was beside you, beside your doubts.   Without revealing Myself I made you wait, so as better to consider your eagerness.   “Put your finger into the marks of the nails.   Put your hand into my side, do not be unbelieving any longer, but believe.”
Then Thomas touched Him and all his mistrust fell away.   Full of genuine faith and all the love owing to God, he cried out:  “My Lord and my God!”   And the Lord said to him – “You believe because you have seen me;  happy are those who have not seen and yet believe!”   Thomas took the news of the Resurrection to those who had not seen.   Draw the whole earth to believe, not by its own sight but at your word.   Go through peoples and cities far away.   Teach them to carry the cross rather than weapons on their shoulders.   Only proclaim me – they will believe and worship.   They will demand no other proof.   Tell them they are called by grace and, with your own eyes, behold their faith.   Truly, blessed are those who did not see and yet believed!
This is the army the Lord raises, these are the children of the baptismal font, the works of grace, the fruit of the Spirit.   They have followed Christ without having seen Him, they sought Him and believed.   They recognised Him with the eyes of faith not those of the body.   They have not put their finger into the mark of the nails but they have bound themselves to His cross and embraced His sufferings.   They have not seen the Lord’s side but, by grace, they have become members of His body and have made His words their own:  “Happy are those who have not seen and yet believe!”… Basil of Seleucia (Died c 468) Bishop – Sermon for the Resurrection, 1-4

PRAYER – Almighty Father,as we honour Thomas the Apostle, let us always experience the help of his prayers. May we have eternal life by believing in Jesus,
whom Thomas acknowledged as Lord, for He lives and reigns with You and the Holy Spirit, one God, forever and ever. Amen