Little Known Fact #9:   While visiting the United States in 1976, Cardinal Karol Wojtyla spent a few days in Pomfret, Vermont with philosopher Anna-Teresa Tymieniecka and her family.   His main purpose was to work on the English translation of Osobo I Czyn (The Acting Person) but he also used it as a time to relax and enjoy nature.  For example, he was often late for lunch because he had been swimming in the neighbour’s pond. Additionally, he didn’t want to be treated like a guest but instead insisted that he cut the grass and help bale hay.   He was truly in his element in Vermont and remarked that it reminded him of the Tatras in Poland.   Wojtyla spent most of his time outdoors, working on the English translation while sitting on the trunk of a tree that had fallen.

REFLECTION:   “This was his message:  man is the way of the Church and Christ is the way of man.  With this message, which is the great legacy of the Second Vatican Council and of its “helmsman”, the Servant of God Pope Paul VI, John Paul II led the People of God across the threshold of the Third Millennium, which thanks to Christ he was able to call “the threshold of hope”.   Throughout the long journey of preparation for the great Jubilee he directed Christianity once again to the future, the future of God, which transcends history while nonetheless directly affecting it.   He rightly reclaimed for Christianity that impulse of hope which had in some sense faltered before Marxism and the ideology of progress.  He restored to Christianity its true face as a religion of hope, to be lived in history in an “Advent” spirit, in a personal and communitarian existence directed to Christ, the fullness of humanity and the fulfillment of all our longings for justice and peace.”   Pope Benedict XVI at the Beatification Ceremony

Quote Day 9:   “Two thousand years have gone by but sinners in need of mercy — and who is not? — still experience the consolation of that “today” of salvation which on the Cross opened the gates of the Kingdom of God to the repentant thief: “Truly, I say to you, today you will be with me in Paradise” (Lk 23:43).” St John Paul

St Hilarion longed for a solitude that continually escaped him, the price of being a pioneer.   But he persisted and finally found the solitary life he was looking for.   We all have to be alone with God sometimes and although we may have trouble doing it, it is worth the effort, time and trouble.

God seeks after those who seek Him and He comes to them!

St Hilarion, pray for us!

“Take in one hand a sponge full of water
and in the other a little pebble – press them equally.
Nothing will come out of the pebble
but out of the sponge will come abundance of water.
The sponge is the soul filled with the Holy Spirit
and the stone is the cold and hard heart
which is not inhabited by the Holy Spirit.”

“To live according to the Holy Spirit
means to live by faith and hope and charity –
to allow God to take possession of our lives
and to change our hearts,
to make us resemble him more and more.”

“It is not the actual physical exertion that counts
towards one’s progress, nor the nature of the task
but by the spirit of faith with which it is undertaken.”

Jesus said to his disciples:
“No one who prefers father or mother to me is worthy of me.”…Matthew 10:37

PRAYER – Holy Father, grant me an operative faith, a faith that will move mountains. Englighten my soul with Your Light, Goodness, Power and Wisdom. Let my faith be an image of You by lively deeds and love and by conforming myself to Your Will in all things. St Hilarion from such a young age you searched for complete closeness and abandonment to God, please pray that we may manifest such a true faith, amen. 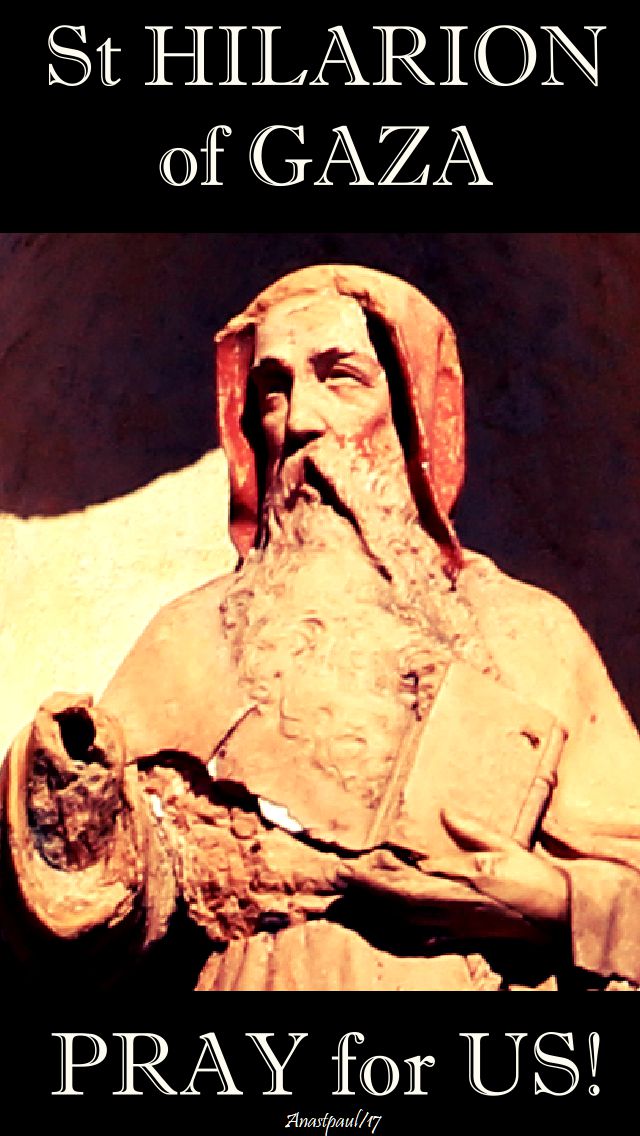 Eternal light, shine into our hearts,
Eternal Goodness, deliver us from evil,
Eternal Power, be our support,
Eternal Wisdom, scatter the
darkness of our ignorance,
Eternal Pity, have mercy on us;
that with all our heart
and mind
and soul
and strength,
we may seek Your Face
and be brought by Your infinite mercy
to Your Holy Presence;
through Jesus Christ, our Lord
Amen.

St Hilarion spent most of his life in the desert according to the example of Anthony the Great.

Shortly after St Hilarion’s death, St Jerome wrote about the life of this hermit who had introduced monasticism into Palestine.   Jerome told of Hilarion’s lifelong pursuit of solitude, where he could encounter God in prayer.

Hilarion was born in Thabatha, south of Gaza in Syria Palaestina of pagan parents. He successfully studied rhetoric with a Grammarian in Alexandria.   It seems that he was converted to Christianity in Alexandria.   After that, he shunned the pleasures of his day—theatre, circus and arena—and spent his time attending church.   According to St Jerome, he was a thin and delicate youth of fragile health.

After hearing of Saint Anthony, whose name (according to St.erome), “was in the mouth of all the races of Egypt” Hilarion, at the age of fifteen, went to live with him in the desert for two months.   As Anthony’s hermitage was busy with visitors seeking cures for diseases or demonic affliction, Hilarion returned home along with some monks.   At Thabatha, his parents having died in the meantime, he gave his inheritance to his brothers and the poor and left for the wilderness. 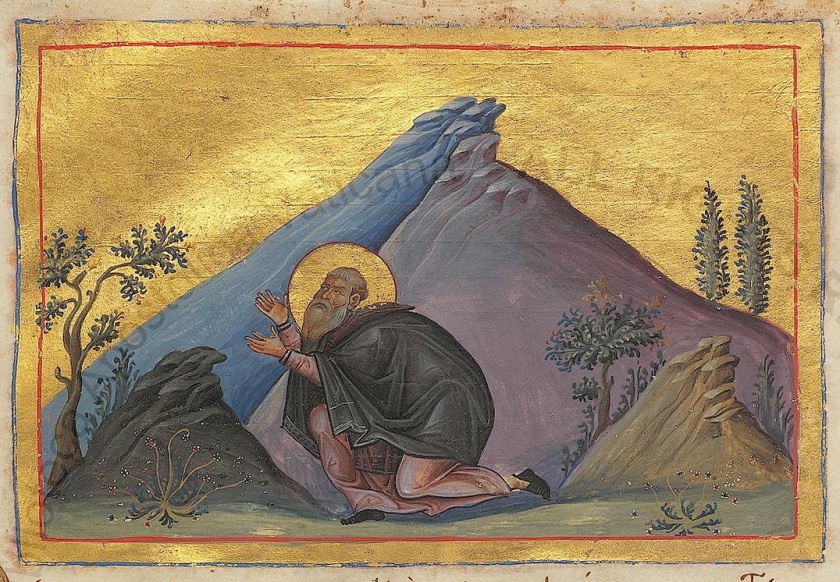 St Jerome wrote about the divine irony of the fame that denied it to him because his miracles attracted so many people. In this brief excerpt, Jerome describes Hilarion’s faith and a typical miracle:

Once . . . when he was eighteen years old, brigands tried to find him at night.   Either they believed that he had something to steal or they thought he would scorn them if they didn’t intimidate him. . . . From evening till dawn, they hunted in every direction but couldn’t find him.   In the broad daylight, however, they came upon him and apparently as a joke asked him:  “What would you do if robbers attacked you?”   He answered:   “A naked person does not fear robbers.”   “You could be killed.”   “I could,” he said.   “But I am not afraid of robbers because I am ready to die.”   Admiring his faith, they confessed their folly of the night before and their blindness and promised to reform their lives…

A woman of Eleutheropolis, despised by her husband of fifteen years because of her sterility, . . . was the first who dared to intrude upon blessed Hilarion’s solitude.   While he was still unaware of her approach, she suddenly threw herself at his knees saying:  “Forgive my boldness. . . ., he asked her why she had come and why she was weeping.   When he learned the cause of her grief, raising his eyes to heaven, he commanded her to have faith and to believe.   He followed her departure with tears.   When a year had gone by, he saw her with her son.

Like Anthony, Hilarion took only a little food once a day at sunset.   When tempted sexually, he ate even less.  “I’ll see to it, you jackass,” he said, “that you shall not kick.”  He never bathed nor changed his tunic until it wore out.   He said, “It is idle to expect cleanliness in a hair shirt.”   Jerome relates that even though Hilarion suffered extreme dryness of spirit, he persevered in prayer and cured many people of sickness and demon possession.   The parade of petitioners and would-be disciples drove Hilarion to retire to more remote locations.   But they followed him everywhere.   First he visited Anthony’s retreat in Egypt.   Then he withdrew to Sicily, later to Dalmatia and finally to Cyprus. He died there in 371. 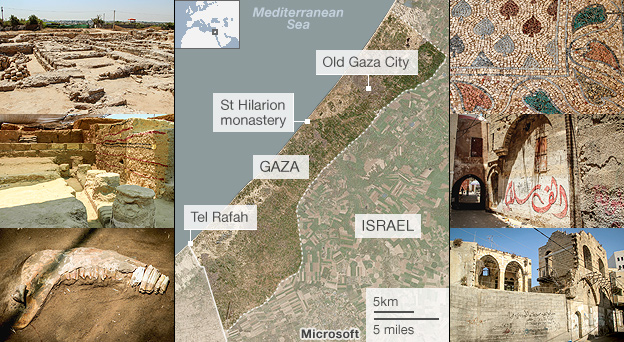 Saint Ursula and Companions: Legendary princess, the daughter of a Christian British king and Saint Daria. She travelled Europe in company of either 11 or 11,000 fellow maidens; the 11,000 number probably resulted from a misreading of the term “11M” which indicated 11 Martyrs, but which a copyist took for a Roman numeral. Ursula and her company were tortured to death to get them to renounce their faith, and old paintings of them show many of the women being killed in various painful ways. Namesake for the Ursuline Order, founded for the education of young Catholic girls and women.
There are other saints closely associated with Ursula and her story –
travelling companions who were martyred with her

led by a dove to the lost tomb of Ursula:
• Cunibert of Cologne