GOD alone can claim the attribute of holiness.   Hence we say in the Hymn, “Tu solus sanctus,” “Thou only art holy.”   By holiness we mean the absence of whatever sullies, dims and degrades a rational nature;  all that is most opposite and contrary to sin and guilt.

We say that God alone is holy, though in truth all His high attributes are possessed by Him in that fullness, that it may be truly said that He alone has them.   Thus, as to goodness, our Lord said to the young man, “None is good but God alone.”   He too alone is Power, He alone is Wisdom, He alone is Providence, Love, Mercy, Justice, Truth.   This is true but holiness is singled out as His special prerogative, because it marks more than His other attributes, not only His superiority over all His creature but emphatically, His separation from them.   Hence we read in the Book of Job, “Can man be justified compared with God, or he that is born of a woman appear clean?   Behold, even the moon doth not shine and the stars are not pure, in His sight.”   “Behold, among His saints none is unchangeable and the Heavens arc not pure in His sight.”

This we must receive and understand in the first place but secondly, we know too, that, in His mercy, He has communicated in various measures His great attributes to His rational creatures and, first of all, as being most necessary, holiness.   Thus Adam, from the time of his creation, was gifted, over and above his nature as man, with the grace of God, to unite him to God and to make him holy.   Grace is therefore called holy grace; and, as being holy, it is the connecting principle between God and man.   Adam in Paradise might have had knowledge and skill and many virtues;  but these gifts did not unite him to his Creator.   It was holiness that united him, for it is said by St Paul, “Without holiness no man shall see God.”

And so again, when man fell and lost this holy grace, he had various gifts still adhering to him;  he might be, in a certain measure, true, merciful, lovin, and just but these virtues did not unite him to God.   What he needed was holiness and, therefore, the first act of God’s goodness to us in the Gospel, is to take us out of our unholy state by means of the sacrament of Baptism and by the grace then given u, to re-open the communications, so long closed, between the soul and heaven.

We see then the force of our Lady’s title, when we call her “Holy Mary.”   When God would prepare a human mother for His Son, this was why He began by giving her an immaculate conception.   He began, not by giving her the gift of love, or truthfulness, or gentleness, or devotion, though according to the occasion she had them all.   But He began His great work before she was born, before she could think, speak, or act, by making her holy and thereby, while on earth, a citizen of heaven.   “Tota pulchra es, Maria!”   Nothing of the deformity of sin was ever hers.   Thus she differs from all saints. There have been great missionaries, confessors, bishops, doctors, pastors.   They have done great works and have taken with them numberless converts or penitents to heaven. They have suffered much and have a superabundance of merits to show.   But Mary in this way resembles her Divine Son,  that, as He, being God, is separate by holiness from all creatures, so she is separate from all Saints and Angels, as being “full of grace.” 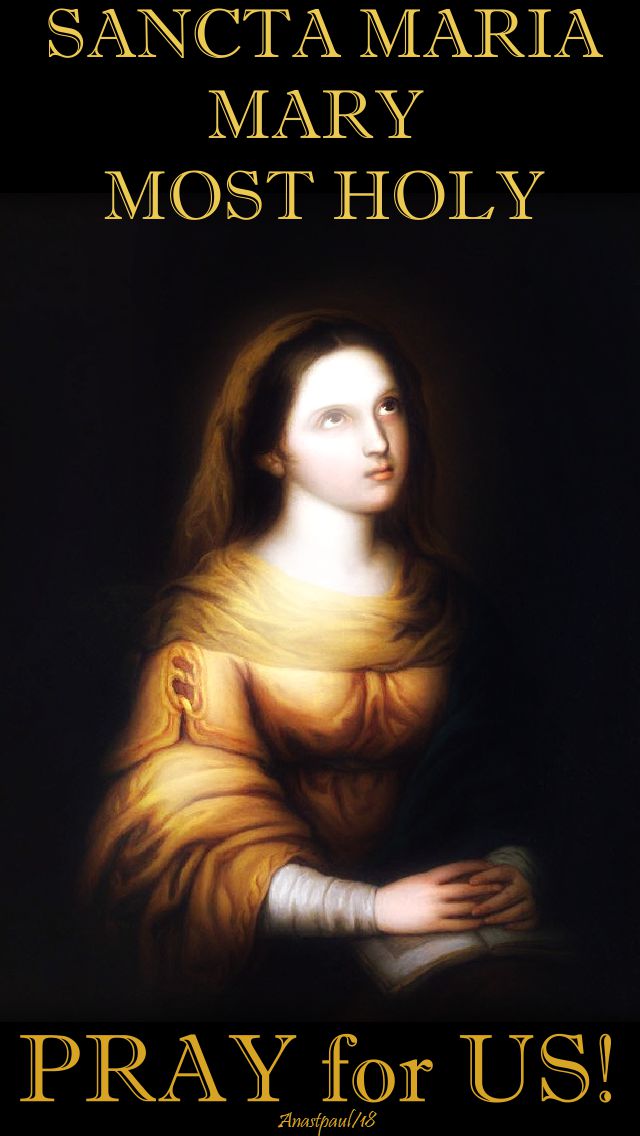