Blessed Giuseppe Ambrosoli MCCI (1923-1987) Priest of the Comboni Missionaries of the Heart of Jesus, Missionary to Uganda, Doctor and Surgeon, he is known in Uganda as the “the Doctor of Charity” and the “Saint Doctor,” Apostle of Charity, medical professor, Founder of a Hospital and a School of Midwifery.
His Life:
https://anastpaul.com/2020/03/27/saint-of-the-day-27-march-blessed-giuseppe-ambrosoli-mcci-1923-1987-to-be-beatified-on-22-november-2020/

Martyrs of Bardiaboch: A group of Christians who were arrested, tortured and executed together for their faith during the persecutions of Persian King Shapur II. Martyrs. – Abibus, Helias, Lazarus, Mares, Maruthas, Narses, Sabas, Sembeeth and Zanitas. 27 March 326 at Bardiaboch, Persia.

Apparition of Our Lord to Our Lady, as soon as He was risen – 27 March:

There is nothing in Scripture that says Jesus appeared to His Mother after His resurrection.
Not everything that occurred is recorded in Scripture (Jn. 21:25), therefore, just because it is not recorded does not mean it did not happen.

Pious belief has long held, that Jesus must have appeared to His Mother before anyone else. The popular belief of why it was not recorded in Scripture, is that the other appearances of Jesus, were written and publicised as proof of the risen Christ, whereas His appearance to His Mother, was a private and personal appearance, born of a deep communion of love.

Pious belief has also noted the absence of Jesus’ mother on Easter morning. Why did she not go to the tomb? Why was Jesus already missing? When news of Jesus’ Resurrection spread amongst His followers, why did Jesus’ Mother not follow them to the tomb? Pious belief has reasoned, that Jesus must have appeared to His Mother immediately following His Resurrection.
Indeed, it is legitimate to think, that the Mother was probably the first person to whom the risen Jesus appeared. Could not Mary’s absence from the group of women, who went to the tomb at dawn, (cf. Mk 16:1; Mt 28:1) indicate that she had already seen her Son Jesus?

Out of interest, all these great masterpieces of the Catholic faith shown here were painted at least 500 years plus ago – this first apparition of Our Risen Lord to His Mother, has always been believed!

In many countries of the world, the Chrism Mass is celebrated separately today or tomorrow, together with the renewal of the local Priests’ vows.   In my particular Diocese, this is so, therefore I hope you will join me in praying for all our priests.

“Dear brothers and sisters, each year the Chrism Mass exhorts us to return to that “yes” to the call of God which we pronounced on the day of our priestly ordination. “Adsum – here I am!”, we said like Isaiah, when he heard the voice of God, who asked him:  “Whom shall I send?   Who will go for us?”  “Here I am, send me!”, Isaiah replied (Isaiah 6:8).   Then the Lord Himself, through the hands of the bishop, laid His hands upon us and we gave ourselves to His mission.   Since then, we have travelled down various roads in following His call.   Can we always claim what Paul, after years of a service of the Gospel that was often labourious and marked by sufferings of all kinds, wrote to the Corinthians: “Therefore, since we have this ministry through the mercy shown us, we are not discouraged” (2 Cor. 4:1)?   “We are not discouraged.”   Let us pray today that our zeal may always be rekindled, so that it is constantly fed by the living flame of the Gospel.”…Pope Benedict 20 March 2008

Eternal High Priest, you offered yourself to the
Father on the altar of the Cross and through the
outpouring of the Holy Spirit gave your priestly
people a share in your redeeming sacrifice.
Hear our prayer for the sanctification of our priests.
Grant that all who are ordained to the ministerial
priesthood may be ever more conformed to you,
the divine Master. May they preach the
Gospel with pure heart and clear conscience.
Let them be shepherds according to your own Heart,
single- minded in service to you and to the Church
and shining examples of a holy,simple and joyful life.
Through the prayers of the Blessed Virgin Mary,
your Mother and ours,draw all priests and the flocks
entrusted to their care to the fullness of eternal life where
you live and reign with the Father and the Holy Spirit,
one God, for ever and ever.

Peter said to him, “Lord, why cannot I follow you now? I will lay down my life for you.” Jesus answered, “Will you lay down your life for me? Truly, truly, I say to you, the cock will not crow, till you have denied me three times…John 13:37-38

REFLECTION – “We too often forget that maxim of the Saints which warns us to consider ourselves as each day recommencing our progress towards perfection.   If we consider it frequently we shall not be surprised at the poverty of our spirit, nor how much we have to refuse ourselves.   The work is never finished, we have continually to begin again and that courageously.   What we have done so far is good but what we are going to commence will be better and when we have finished that, we shall begin something else that will be better still and then another – until we leave this world to begin a new life that will have no end because it is the best that can happen to us.
It is not then a case for tears that we have so much work to do for our souls, for we need great courage to go ever onwards (since we must never stop) and much resolution to restrain our desires.   Observe carefully this precept that all the Saints have given to those who would emulate them: to speak little, or not at all, of yourself and your own interests.”…St Francis de Sales (1567-1622) Doctor of the Church

PRAYER – All-powerful, everliving God, may our sacramental celebration of the Lord’s passion bring us Your forgiveness, Your love and Your help.   Grant that through the prayers of Blessed Louis-Edouard Cestac, Your servant, we may constantly grow in sanctity, zeal and fortitude. T  hrough our Lord Jesus Christ, in union with the Holy Spirit, one God forever, amen.

Saint of the Day – 27 March – Blessed Louis-Édouard Cestac (6 January 1801 – 27 March 1868) – Priest and Founder, Apostle of Charity.   Patronage – Servants of Mary.   Bl Louis was a French Roman Catholic priest and alongside his sister Marie-Louise-Élise co-founded the Serviteurs de Marie/Servants of Mary.   Cestac was dedicated to the needs of the poor and he met with them on a frequent basis in order to get to know them better and to know how he could better serve them in terms of their material and spiritual needs.   But he was concerned for girls who were poor and destitute and so decided to provide them with a stable environment.   He enlisted the aid of his sister and the two founded a religious order that would be dedicated to helping them.   His beatification received approval in mid-2014 from Pope Francis after the pontiff approved a miracle that had been found to have been attributed to his intercession. Cardinal Angelo Amato beatified Cestac in mid-2015 on the pope’s behalf. 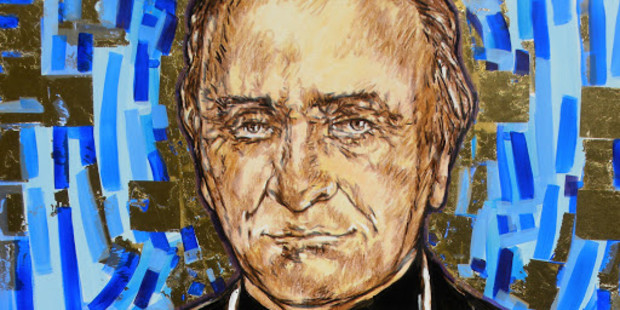 Louis-Édouard Cestac was born in 1801 in France to Dominique Cestac and Jeanne Amitessarobe at number 45 on the Rue Mayou;  his siblings were Marianne and the Servant of God Marie-Louise-Élise (14 March 1811-17 March1849).   His mother Jeanne was Basque-Spanish.   Marianne (b. circa 1795) was the eldest while Élise was the last, meaning Cestac was the middle sibling;  he was Élise’s godfather at her baptism.
In his childhood he suffered an incurable neuralgia and complete mutism for a duration of three years.   His mother decided to consecrate him to the Mother of God and Cestac’s condition improved to the point where he was healed.   His healing was credited to the intercession of the Blessed Virgin.   The Cestac’s later moved to Puntous due to the Peninsular War.

Cestac underwent his ecclesial studies from 1816 at Aire-sur-l’Adour and Paris where he befriended Saint Michel Garicoïts 1797-1863 (Memorial 14 May).   He received the minor orders on 25 December 1821 and in 1822 was back to his studies and formation after recovering from a serious illness.   He was ordained to the diaconate on 26 June 1825 before being ordained to the priesthood on 17 December 1825.   He served as a professor in Larressore from 1826 until 1831.   Father Cestac was later appointed as the vicar of the diocesan cathedral on 27 August 1831 and gave his full attention to the poor and met with them on a frequent basis in order to better serve them and to know them better. 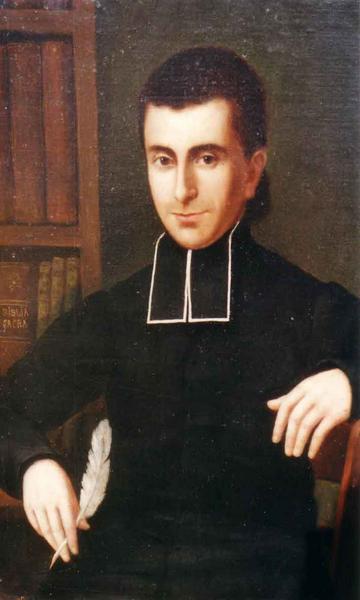 In 1836 he established a home for poor girls.   He and his sister Marie-Louise Élise together co-founded – on 6 January 1842 – their own religious congregation known as the Serviteurs de Marie.   Two other women joined at the time of the order’s founding while Élise became Sister Marie Magdalene.   There was once an occasion when Empress Eugénie de Montijo came to Cestac asking him to pray for her to have a son but the priest assured her that she would indeed bear a son – the empress did indeed have a son.

On 13 January 1864 a profound experience struck when a beam of light hit Cestac and caused him to see devils scattered across the globe causing grave damage.   He was horrified but was relieved to see the Mother of God before him and who told him that those devils had been let loose.   Yet she added that the time had come for the world to request her intercession to fight and end the grave powers of Hell.   From her the priest received the prayer known as the “August Queen”.   He presented this to Bishop François Lacroix and also had 500, 000 copies printed to be sent.   At the time of the first printing the printing press broke down twice.

August Queen of Heaven,
Sovereign Mistress of the Angels,
you, who from the beginning,
has received from God
the power of the mission
to crush the head of Satan,
we humbly implore you,
to send your holy legions,
so that under your command
and by your power,
they may drive the devils away,
everywhere, fight them,
subduing their boldness
and thrust them down into the abyss.


Who is like unto God?
O good and tender Mother,
you will always be our love and our hope.
O divine Mother,
send your holy angels to defend me
and drive far away from me the cruel enemy.
Holy Angels and Archangels defend us, keep us.
Amen

His dedication to social and agricultural reform won him praise and it even earned him the Legion of Honour from Napoleon III in 1865 for his contributions to schooling and agriculture.   He died on 27 March 1868 in Bayonne, Pyrénées-Atlantiques France of natural causes. 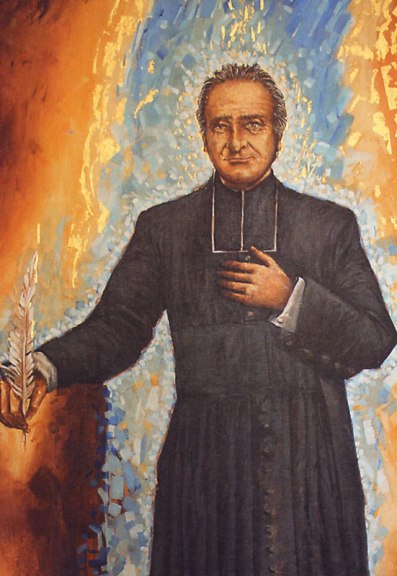