REFLECTION – “In the Gospel we have just heard, Jesus tells His Apostles to put their faith in Him, for he is “the way, and the truth and the life” (Jn 14:6).   Christ is the way that leads to the Father, the truth which gives meaning to human existence and the source of that life which is eternal joy with all the saints in His heavenly Kingdom.   Let us take the Lord at His word!   Let us renew our faith in Him and put all our hope in His promises!
… Praying fervently for the coming of the Kingdom also means being constantly alert for the signs of its presence and working for its growth in every sector of society.   It means facing the challenges of present and future with confidence in Christ’s victory and a commitment to extending His reign.   It means not losing heart in the face of resistance, adversity and scandal.   It means overcoming every separation between faith and life and countering false gospels of freedom and happiness.   It also means rejecting a false dichotomy between faith and political life, since, as the Second Vatican Council put it, “there is no human activity – even in secular affairs – which can be withdrawn from God’s dominion” (Lumen Gentium, 36).   It means working to enrich … society and culture with the beauty and truth of the Gospel and never losing sight of that great hope which gives meaning and value to all the other hopes which inspire our lives.
… In today’s Gospel, the Lord promises His disciples that they will perform works even greater than His (see Jn 14:12).   Dear friends, only God in His providence, knows what works His grace has yet to bring forth in your lives and in the life of the Church! …  Let us now join our prayers to His, as living stones in that spiritual temple which is His One, Holy, Catholic and Apostolic Church.   Let us lift our eyes to Him, for even now He is preparing for us a place in His Father’s house.   And empowered by His Holy Spirit, let us work with renewed zeal for the spread of His Kingdom.” … Pope Benedict XVI – Fifth Sunday of Easter, 20 April 2008 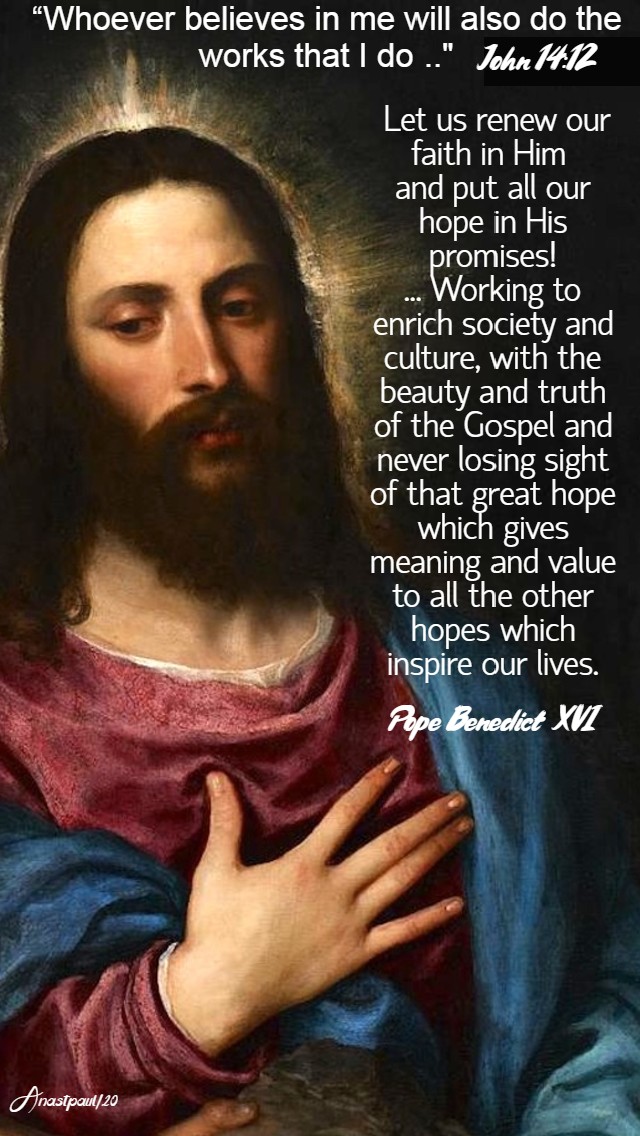 PRAYER – Almighty God and Father, Your ways are not our ways, teach us to willingly agree to them, for You know which way we should go. Help us to say “yes” always to Your plan and to render ourselves, as a sacrament of Your divine love to all we meet.   Fill us with the grace to be Your tools, to bring glory to Your kingdom.   Our Father, who art in heaven, may Your Will be done on earth, as it is in heaven.   Mary Mother of God, Mother of Faith, pray for us!   Through our Our Lord Jesus Christ with You, in the union of the Holy Spirit, one God forever, amen.

One Minute Reflection – 3 May – Friday of the Second Week of Easter, Gospel: John 14:6–14 and the Feast of Sts James and Philip and the Memorial of Saint Stanislaw Kazimierczyk CRL (1433–1489)

“Truly, truly, I say to you, he who believes in me will also do the works that I do and greater works than these will he do, because I go to the Father…”...John 14:12

REFLECTION – “Jesus is the Father’s Emissary.   From the beginning of His ministry, He “called to him those whom he desired … And he appointed twelve, whom also He named apostles, to be with Him and to be sent out to preach.” (Mk 3:13-14)   From then on, they would also be His “emissaries” (Greek apostoloi).   In them, Christ continues His own mission = “As the Father has sent me, even so I send you.” (Jn 20:21)   The apostles’ ministry is the continuation of His mission, Jesus said to the Twelve: “he who receives you receives me.” (Mt 10:40)

Jesus unites them to the mission He received from the Father.   As “the Son can do nothing of his own accord” but receives everything from the Father who sent Him, so those whom Jesus sends can do nothing apart from Him (Jn 5:19.30), from whom they received both the mandate for their mission and the power to carry it out.   Christ’s apostles knew that they were called by God as “ministers of a new covenant,” “servants of God,” “ambassadors for Christ,” “servants of Christ and stewards of the mysteries of God” (1 Cor 4:1).

In the office of the apostles, there is one aspect that cannot be transmitted – to be the chosen witnesses of the Lord’s Resurrection and so the foundation stones of the Church. But their office also has a permanent aspect.   Christ promised to remain with them always.   The divine mission entrusted by Jesus to them “will continue to the end of time, since the Gospel they handed on is the lasting source of all life for the Church.  Therefore, … the apostles took care to appoint successors.” (Vatican II, LG 20) Catechism of the Catholic Church- #858-860 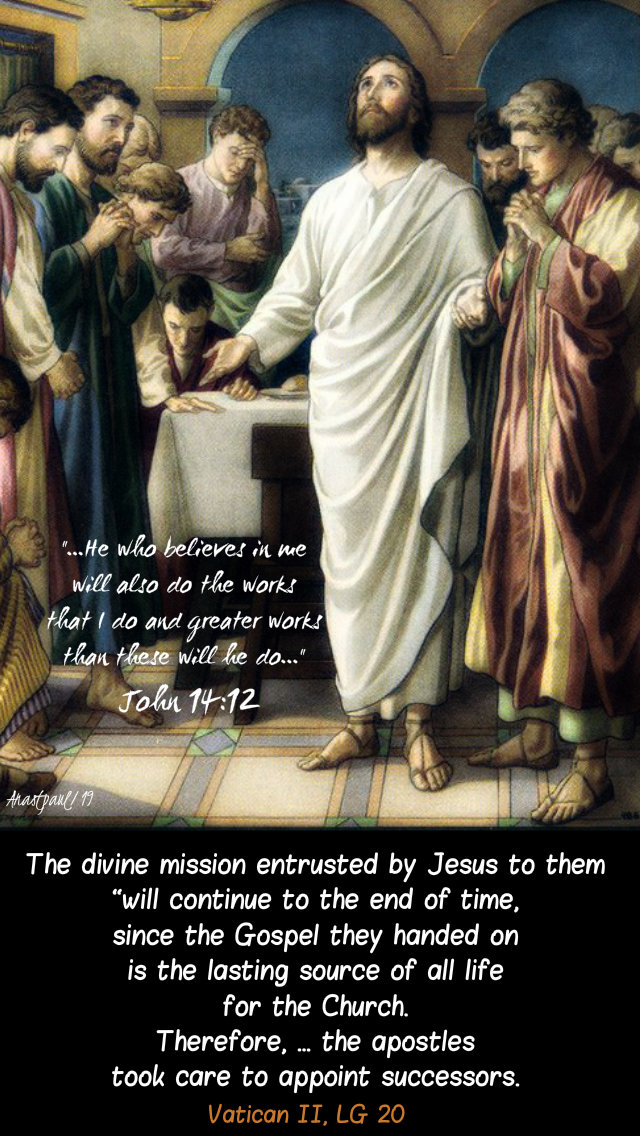 PRAYER – Almighty Father, we believe, strengthen our faith.   Divine Son, we follow You, remain with us.   Holy Spirit, come, guide our steps.   Glory be to the Father and to the So and to the Holy Spirit, as it was in the beginning is now and ever shall be, amen. Saints James and Philip, Saint Stanislaw, pray for us! 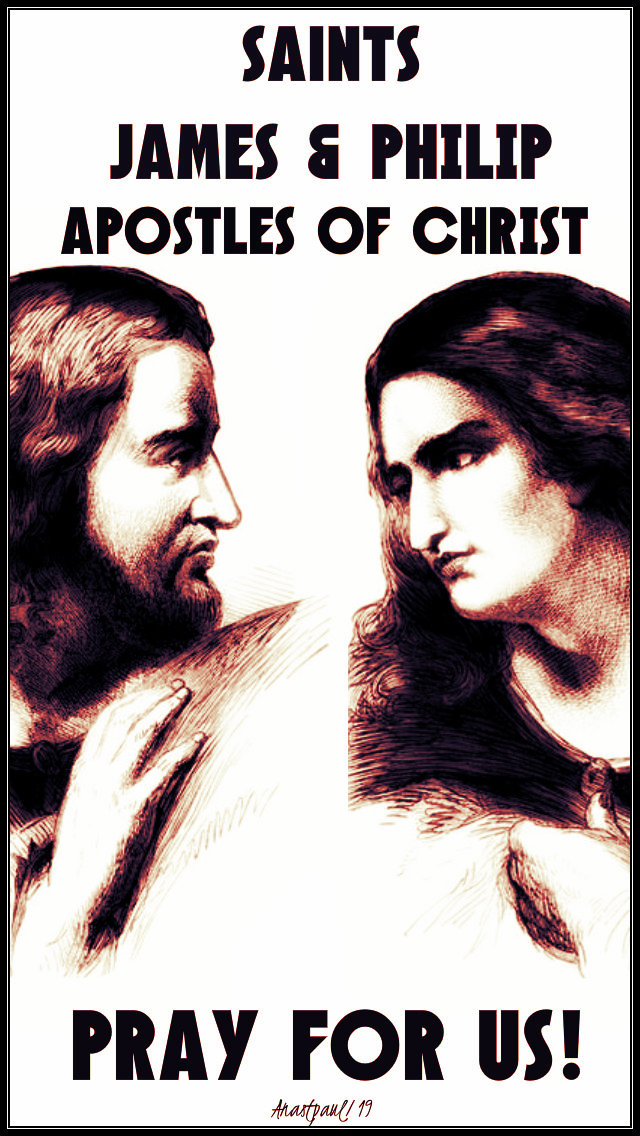