The Meaning of the Message
An apparition does not form part of the deposit of Faith.   Rather it is a supernatural sign needing to be discerned.   We are free to accept or reject it but in any case, what is ,needed is sufficient information on which to base a sound judgement and an enlightened faith.

Such is the end which the Church has in view when a bishop affirms that an apparition reported to have taken place within the confines of his diocese “bears within itself all the characteristics of truth and that the faithful have grounds for believing it indubitable and certain.”   One cannot grasp the purpose and dynamism of such an event except in the light of the Holy Spirit’s action in our day and in the perspectives of the sources of our Faith.

It is time then to ask ourselves what is the meaning and import of the grace accorded to mankind on 19 September 1846.   What are the aspects of the Word of God to which this message from Heaven recalls us?   And to what kind of conversion does it summon us?

Even before speaking, Our Lady presents herself to the children and to us.   Mary, the mother of Jesus and our mother, radiates the light of the resurrection.   She is nothing else but light.   The brightness of her face is such that Maximin is unable to bear it and it dazzles Melanie.   Her garments, like those of Christ on the mount of the Transfiguration, are likewise resplendent with light – her headdress, robe, long apron and peasant woman’s shawl.   All the light comes from the large crucifix she bears on her breast.   In appearing at La Salette Mary continues to fulfil the mission she received at the foot of the cross: to “take pains” for us in order to give birth to us in the Faith.

Faithful to the mission she received on Calvary, Mary never ceases to recall to us, the means which have been given to us, to return to her Son – for we cannot, without His aid, build our lives and our world.   To reject His grace cannot fail to have most serious consequence.   Mary, our Reconciler, came to La Salette, to recall this truth to her people.

Our Lady of La Salette, Pray for Us!

One Minute Reflection – 19 September – Thursday of the Twenty-fourth week in Ordinary Time, Year C, Gospel: Luke 7:36–50 and The Feast of Our Lady of La Salette

“Therefore I tell you, her sins, which are many, are forgiven, for she loved much”….Luke 7:47

REFLECTION – “At this point, an even greater amazement falls on all those at table:  “Who is this, who even forgives sins?” (v.49).   Jesus does not give an explicit answer but the conversion of the sinful women stands before everyone’s eyes and shows that in Him shines forth the power of God’s mercy, capable of transforming hearts.

The sinful woman teaches us the link between faith, love and gratitude.   Her “many sins” were forgive her and therefore she loves much, “but he who is forgiven little, loves little” (v. 47).   Even Simon has to admit that the one who has been forgiven more, loves more.   God has enclosed everyone in the mystery of mercy and from this love, which always goes before us, all of us learn to love.   As St Paul reminds us: “In Christ, we have redemption through his blood, the forgiveness of our trespasses, according to the riches of his grace, which he has lavished upon us” (Eph. 1:7-8).   In this text, the word “grace” is practically synonymous with mercy and is called “lavish,” that is, beyond our expectations, for it carries out God’s saving plan for each of us. … Salvation enters the heart, only when we open the heart, in the truth of our sins.” … Pope Francis 18 September 2014 (“Pope Francis” painting by Natalia Tsarkova)

PRAYER – Grant us Lord, a true knowledge of salvation, so that, freed from fear and from the power of our foes, we may serve You faithfully in love and sorrow for our sins.   May we, through the love You grant us, extend our love to all we meet and may the tears of the Holy Virgin of Reconciliation, not reject our prayers but intercede for us, obtain for us the grace to love our Lord Jesus above all else.   May we console you by a holy life and so come to share the eternal life Christ gained by His Cross.   Our Lady of La Salette, pray for us, through our Lord Jesus Christ, with the Holy Spirit, God forever,amen.

Our Lady of La Salette (1846) :
Mary appeared to two small children, Melanie Mathieu and Maximin Giraud, on the mountain of La Salette in the French Alps. She was crying and around her neck was a crucifix, with a hammer and pincers on either side – 19 September 1846. Approved by the diocesan bishop in 1851.

Martyrs of Phunon – (4 saints): Four bishops in Egypt who were sentenced to forced labour in a rock quarry and martyred in the persecution of Diocletian. Noted for celebrating Mass in prison. – Elias, Nilus, Patermuzio and Peleus. They were burned to death in 310 at Phunon, near Petra in Palestine.

“Do you say your prayers properly, my children?   Oh! my children, you must say them, morning and evening.
When you can do no more, say a Pater and an Ave Maria; and when you have the time to do better, you will say more.”

Our Lady of la Salette

Pope John Paul II wrote about La Salette on 6 May 1996.
“The message of La Salette was given to two young shepherds in a period of great suffering.   La Salette is a message of hope – a hope sustained by the intercession of her who is the Mother of all peoples… At La Salette, Mary clearly spoke of the constancy of her prayer for the world:  she will never abandon the people created in the image and likeness of God, those to whom it has been given to become children of God.   May she lead to her Son all the nations of the earth.”

Feast of Our Lady of La Salette – 19 September (French: Notre-Dame de La Salette) is a Marian apparition reported by two children, Maximin Giraud and Mélanie Calvat to have occurred at La Salette-Fallavaux, France, in 1846.

The shepherd children Maximin and Melanie
On 19 September 1851, Pope Pius IX formally approved the public devotion and prayers to Our Lady of La Salette, referring to its messages of apparition as “secrets”.   On 24 August 1852, Pope Pius IX once again mentioned the construction of the altar to La Salette.   The same papal bull granted the foundation of the Association of Our Lady of La Salette, formalised on 7 September.
On 21 August 1879, Pope Leo XIII formally granted a Canonical Coronation to the image at the Basilica of Our Lady of La Salette.   A Russian style tiara was granted to the image, instead of the solar-type tiara used in its traditional depictions of Virgin Mary during her apparitions.

La Salette is celebrated as the place where, the Blessed Virgin appeared to two little shepherds and each year is visited by a large number of pilgrims.   On 19 September, 1846, about three o’clock in the afternoon in full sunlight, on a mountain about 5918 feet high and about three miles distant from the village of La Salette-Fallavaux, it is related that two children, a shepherdess of fifteen named Melanie Calvat, called Mathieu and a shepherd-boy of eleven named Maximin Giraud, beheld in a resplendent light a “beautiful lady” clad in a strange costume.   Speaking alternately in French and in patois, she charged them with a message which they were “to deliver to all her people”.   After complaining of the impiety of Christians and threatening them with dreadful chastisements in case they should persevere in evil she promised them the Divine mercy if they would amend.

Finally, it is alleged, before disappearing she communicated to each of the children a special secret.   The sensation caused by the recital of Melanie and Maximin was profound, and gave rise to several investigations and reports.   Mgr. Philibert de Bruillard, Bishop of Grenoble, appointed a commission to examine judicially this marvellous event;   the commission concluded that the reality of the apparition should be admitted.   Soon several miraculous cures took place on the mountain of La Salette, and pilgrimages to the place were begun.  The miracle, needless to say, was ridiculed by free-thinkers but it was also questioned among the faithful and especially by ecclesiastics.   There arose against it in the Dioceses of Grenoble and Lyons a violent opposition, aggravated by what is known as the incident of Ars.   As a result of this hostility and the consequent agitation, Mgr. de Bruillard (16 November 1851) declared the apparition of the Blessed Virgin as certain  and authorised the cult of Our Lady of La Salette.   The first stone of a great church was solemnly laid on the mount of La Salette, 25 May, 1852, amid a large assembly of the faithful.   This Church, later elevated to the rank of a basilica, was served by a body of a religious called Missionaries of La Salette – who were founded in 1852 by Bp. Philbert de Bruillard, Bishop of Grenoble, France, and presently serve in some 25 countries..   In 1891 diocesan priests replaced these missionaries, driven into exile by persecuting laws.

As said above, the Blessed Virgin confided to each of the two children a special secret. These two secrets, which neither Melanie or Maximin ever made known to each other, were sent by them in 1851 to Pius IX on the advice of Mgr. de Bruillard.   It is unknown what impressions these mysterious revelations made on the pope, for on this point there were two versions diametrically opposed to each other.   Maximin’s secret is not known, for it was never published.   Melanie’s was inserted in its entirety in brochure which she herself had printed in 1879 at Lecce, Italy, with the approval of the bishop of that town.

” If my people do not wish to submit themselves, I am forced to let go of the hand of my Son.   It is so heavy and weighs me down so much I can no longer keep hold of it.”

Maximin Giraud, after an unhappy and wandering life, returned to Corps, his native village, and died there a holy death (1 March, 1875).   Melanie Calvat ended a no less wandering life at Altamura, Italy (15 December, 1904).  (From the Catholic Encyclopedia, copyright © 1913 by the Encyclopedia Press, Inc) 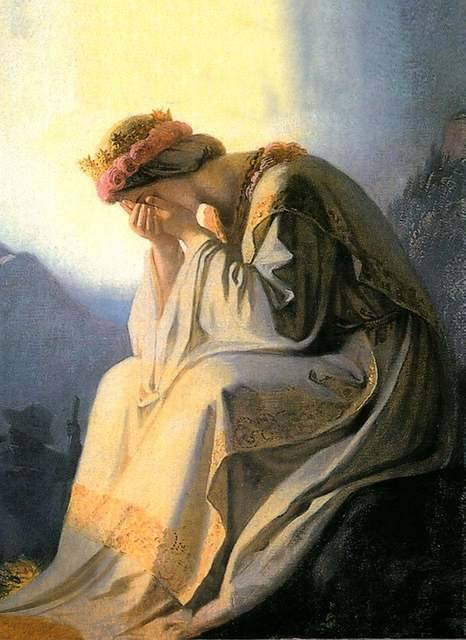 The message of the visionaries of La Salette focuses on the conversion of all humanity to Christ.    St John Vianney, St John Bosco and writer Joris-Karl Huysmans were all influenced by La Salette.   The spirit of La Salette is said to be one of prayer, conversion, and commitment.

Pope John Paul II stated: “As I wrote on the occasion of the 150th anniversary, ‘La Salette is a message of hope, for our hope is nourished by the intercession of her who is the Mother of mankind.”

MEMORARE to OUR LADY of LA SALETTE

Remember, Our Lady of La Salette,
true Mother of Sorrows,
the tears you shed for us on Calvary.
Remember also the care you have taken
to keep us faithful to Christ, your Son.
Having done so much for your children,
you will not now abandon us.
Comforted by this consoling thought,
we come to you pleading,
despite our infidelities and ingratitude.
Virgin of Reconciliation, do not reject our prayers
but intercede for us,
obtain for us the grace to love Jesus above all else.
May we console you by a holy life
and so come to share the eternal life
Christ gained by His cross. Amen

Invocation:
Our Lady of La Salette, Reconciler of Sinners,
pray without ceasing for us who have recourse to you.