Memorial of Our Lady of the Miraculous Medal / The Medal of the Immaculate Conception (1830) (the correct title is the latter):

This Optional Memorial on the Catholic Calendar commemorates the apparition to St. Catherine Labouré on 27 November 1830. Then a novice of the Daughters of Charity in Paris, the young woman saw the Holy Virgin in glowing white, standing on a partial sphere, gazing heavenwards, holding up a gold globe as in offering to God. Words formed in an oval around her: “O Mary, conceived without sin, pray for us who have recourse to you.” The image turned around to reveal a cross atop a bar interlacing a letter M, with two hearts beneath. The Virgin spoke: “Have a medal struck after this model; everyone who wears it will receive great graces…”

On 30 June 1832, Aurélien Vachette delivered the first 1500 medals, commissioned by the the seer’s spiritual director and approved by the Archbishop. Vachette. As Catherine reported, rays came from Mary’s hands but here the hands were empty, held out at her sides. A snake appeared under her feet and below, the date 1830. On the reverse, where Catherine quoted the Virgin as saying, “The M and the two hearts are enough,” Vachette added the 12 stars of Revelation 12:1 encircling the whole. Despite these innovations, Sister Catherine approved the new Immaculate Conception medal, soon known as the Miraculous Medal for the many blessings it delivered as it spread rapidly through France, Europe and the world. It is still one of the most beloved and widespread and efficacious sacramentals of Catholic believers.

Martyrs of Antioch – (3 saints): A group of Christians martyred together for their faith. Little information has survived except for their names – Auxilius, Basileus and Saturninus. 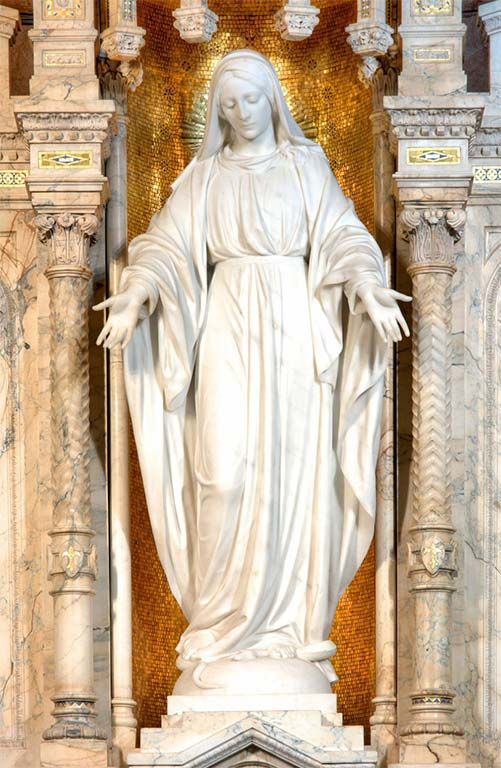 The Miraculous Medal is a devotion to the Virgin Mary called the “Miraculous” Medal for the many miracles associated with those that wear it. It is one of my favorite medals to wear.
The Miraculous Medal came to the world through an Apparition of the Virgin Mary to Catherine Labouré in Paris, France in 1830.   In Mary’s second apparition, she asked that “a medal should be struck in this image.   The people wearing it will receive my indulgence and those who piously say this short prayer will enjoy my very special protection”.
Two of the most famous conversions due to the miraculous medal was that of Fr Alphonse Ratisbonne NDS (1814-1884), an anti-Catholic Jewish banker and Claude Newman (1923-1944).   He received a vision of Our Lady of the Miraculous Medal. After his conversion, he became a priest and worked for the conversion of the Jewish people.

St Maximus of Reiz
St Primitivus of Sahagun
St Secundinus of Ireland
St Severinus the Hermit
St Siffred of Carpentras
St Valerian of Aquileia
St Virgilius of Salzburg
—
Martyrs of Antioch – (3 saints): A group of Christians martyred together for their faith. Little information has survived except for their names – Auxilius, Basileus and Saturninus.