Victory of the King of France (Philip the Fair), imploring the help of Our Lady of Chartres (1304) – 17 August:

It was on this day in the year 1304 that “Philip the Fair” gained a signal victory over the Flemish after recommending himself to Our Lady of Chartres.

The eldest son of King Philip and Isabella of Aragon, he was nicknamed Philip the Fair while yet a Prince for his handsome features. He became King of France at only 17 years of age and married Joan of Navarre in 1284, which enlarged his Kingdom.
In the year 1302, Philip sent an inadequate army into Flanders to suppress the Flemish, who were making incursions into his realm at will. His army was soundly defeated at the Battle of the Golden Spurs. Philip responded by winning a naval victory over the Flemish at Zierichzee and then met the Flemish army at the Battle of Mons-en-Pevele, also known as Mons-en-Puelle, on 17 August 1304.

The battle was furious, lasting all day in extreme heat. Eventually the majority of the French army fled the field, leaving Philip alone with only ten Knights fighting desperately to save themselves and their King. Philip’s horse collapsed, having been killed under him and his life was in great danger of being lost. At that moment, while facing death and certain defeat in battle, Philip turned to the Queen of Heaven, Our Lady of Chartres, begging her assistance to save the day and his life.
Suddenly the French Knights, who had been fleeing the field, turned and saw the King’s Royal Standard still stood, and that he, himself, fought like a Knight of great renown amidst a sea of raging enemies. Racing to the scene with their swords and lances, they turned the Flemish and drove them from the field in what became a resounding victory for the King of France. The Battle of the Golden Spurs was well compensated.
In gratitude for this victory and favour of Our Lady of Chartres, King Philip went at once to do homage to the Virgin Mary at her Cathedral. He took off his own armour and gave it to the Cathedral at the Altar. He also gave to it, in perpetuity, the land and lordship of Barrus, founded a daily Mass forever and left to this Church ,all of the other accoutrements which he had worn on that day of victory. This feast is kept in the Church of Notre Dame, at Paris, on the following day, the 18th and the office is double. This armour is formerly exhibited in the Church ,on the Anniversary of the battle.

“Let the children come to me and do not hinder them, for to such belongs the kingdom of heaven.”…Matthew 19:14

REFLECTION – “Begin and end the day with prayer. Go to God as a child turns to its mother.  If words don’t come spontaneously to you then say, for example: “Come, Holy Spirit, guide me, protect me, enlighten my thoughts so I can pray.”   Or even better, if you speak to the Virgin Mary, say – “Mary, Mother of Jesus, be a mother to me now and help me to pray.” … Saint Teresa of Calcutta (1910-1997) 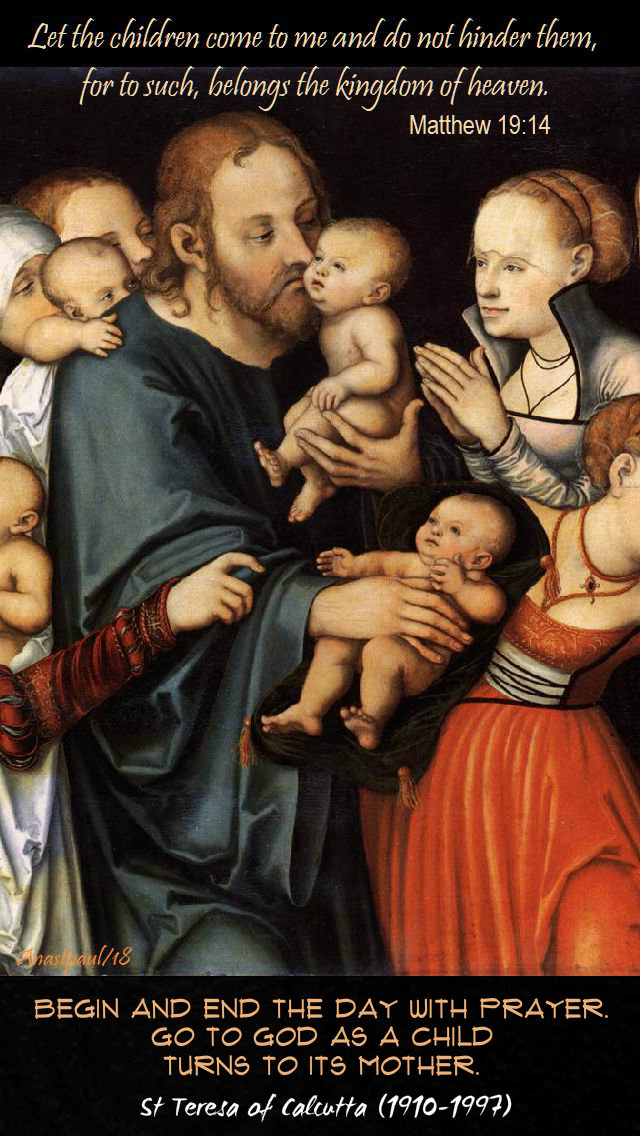 PRAYER – God almighty Father, grant that we may be instruments of welcome and of that love with which Jesus, Your Son, embraces the littlest ones.   May we be a society of love and of holy parenting of all children, especially those most in need.   Holy Mother, teach us and guide us in prayer and love of God and neighbour.   St Clare of the Cross, pray for us.   We make our prayer through Christ, with the Holy Spirit, one God forever, amen. 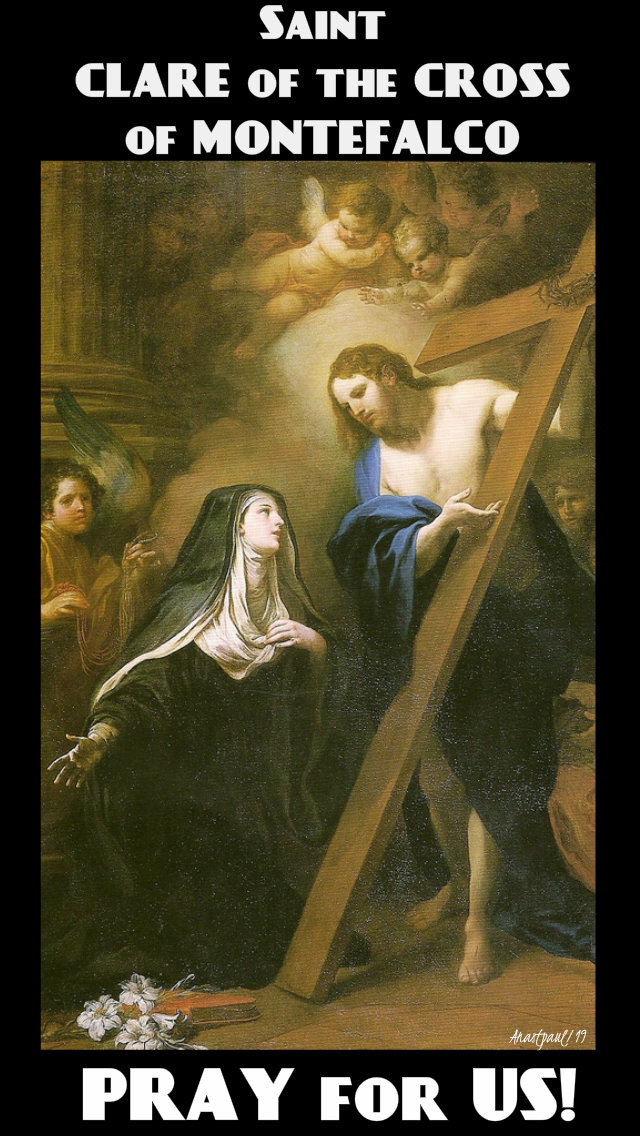 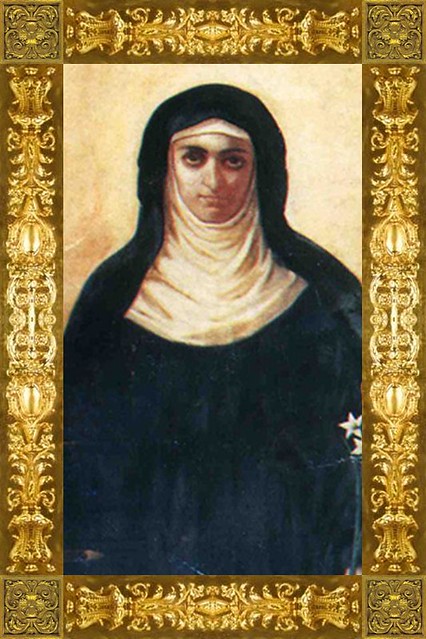 Clare was born in Montefalco, Italy, in 1268, the second daughter of Damiano and Iacopo Vengente, a well-to-do couple.   From a very early age she lived an eremitical life with her older sister Giovanna and another young woman in a small dwelling which Damiano, their father, had built for them.   Clare was a lively and intelligent young girl but equally prayerful and penitential.   The small community of hermits grew and in 1290 was established as a formal convent of nuns under the Rule of Saint Augustine.

Upon the death of Giovanna, Clare at 23 years of age was elected abbess and became mother, teacher and spiritual director of the convent.   A young woman of deep spiritual perception, though with almost no formal education, she was much sought after for advice and counsel from people of all walks of life and from within the walls of the cloister became a director of many souls.

1294 was a decisive year in Clare’s spiritual life.   During the celebration of the Epiphany, after making a general confession in front of all her fellow nuns, she fell into ecstasy and remained in that state for several weeks.   Since she was unable even to eat during this period, the other nuns sustained Clare’s life by feeding her sugar water.   During this time, Clare reported having a vision in which she saw herself being judged in front of God. 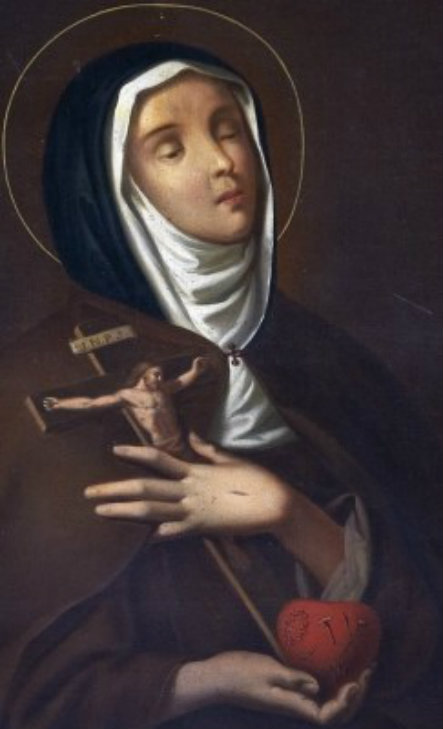 Clare also reported having a vision of Jesus dressed as a poor traveller.   She described His countenance as being overwhelmed by the weight of the cross and His body as showing signs of fatigue.   During the vision, Clare knelt in front of Him and whilst trying to stop Him, she asked, “My Lord, where art Thou going?”   Jesus answered her:  “I have looked all over the world for a strong place where to plant this Cross firmly, and I have not found any.”   After she reached for the cross, making known her desire to help Him carry it, He said to her:  “Clare, I have found a place for My cross here.   I have finally found someone to whom I can trust Mine cross,” and He implanted it in her heart.   Clare took her belief in this vision seriously.   The rest of her years were spent in pain and suffering, yet she continued to joyfully serve as abbess, teacher, mother and spiritual directress of her nuns. 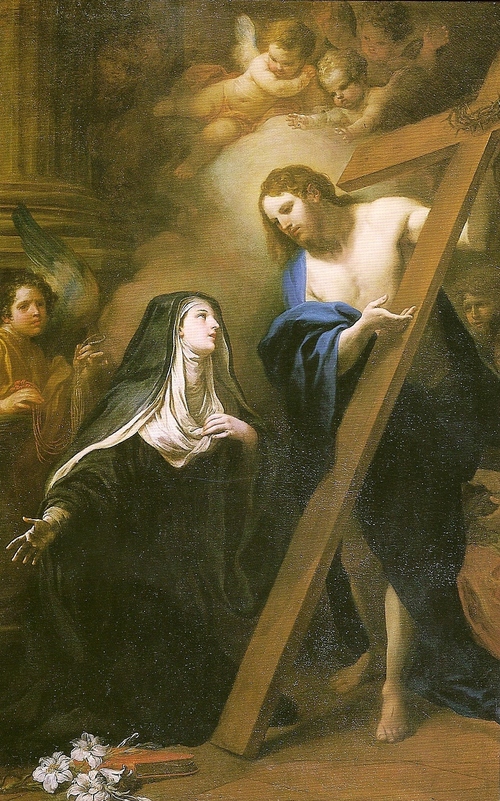 For many years she received no consolation in her interior life except that of her own fidelity to prayer and acts of penance.

In 1303, Clare was able to build a church in Montefalco which would not only serve as a chapel for the nuns but also as a church for the town.   The first stone was blessed by the Bishop of Spoleto on 24 June and that day the church was dedicated to the Holy Cross (Santa Croce in Italian), it is now renamed of St Clare ‘the Church of St Chiara of the Holy Cross.’   Below is the painting of the Exaltation of the Holy Cross in the Church. 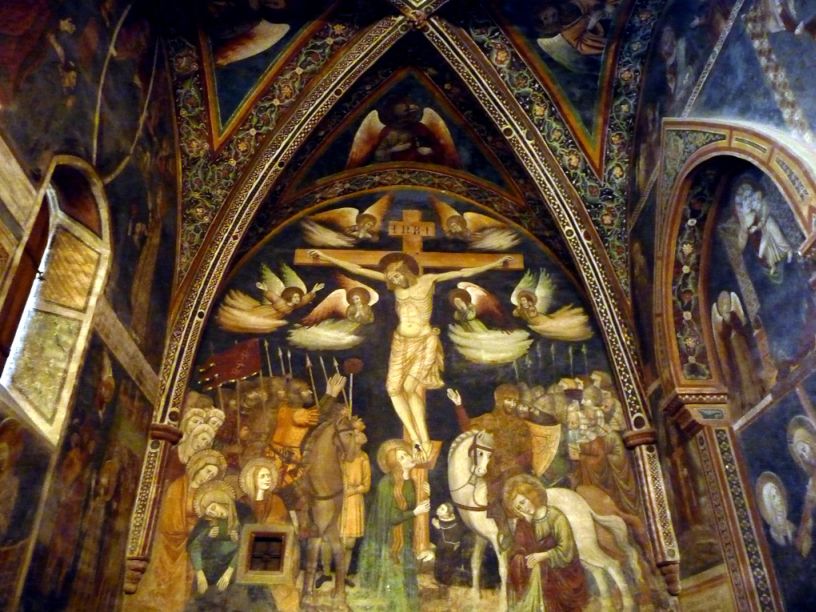 During her final illness she repeated to her sisters that she bore the cross of Christ in her heart.   By August 1308, she had become so ill that she was bedridden.   On 15 August she asked to receive Extreme Unction and on the next day she sent for her brother to come to the monastery.   Clare made her last confession on 17 August and died at about 40 years of age in the convent on 18 August.

Immediately following Clare’s death her heart was removed from her body and upon inspection it was reported that symbols of Christ’s passion, a crucifix and a scourge, were found within her heart.    Upon hearing the news of these signs, the vicar of the Bishop of Spoleto travelled to Montefalco “burning with indignation” suspecting that the nuns of the convent had planted the symbols.   A commission consisting of physicians, jurists and theologians was assembled to conduct an investigation, which subsequently “ruled out the possibility of fabrication or artifice.”   However, doubts as to the veracity of the findings persisted even at the Canonisation proceedings, which were fraught with conflicts including a challenge from the Franciscans that Clare should not be Canonised as a saint of the Order of Saint Augustine because she had been a Franciscan tertiary. 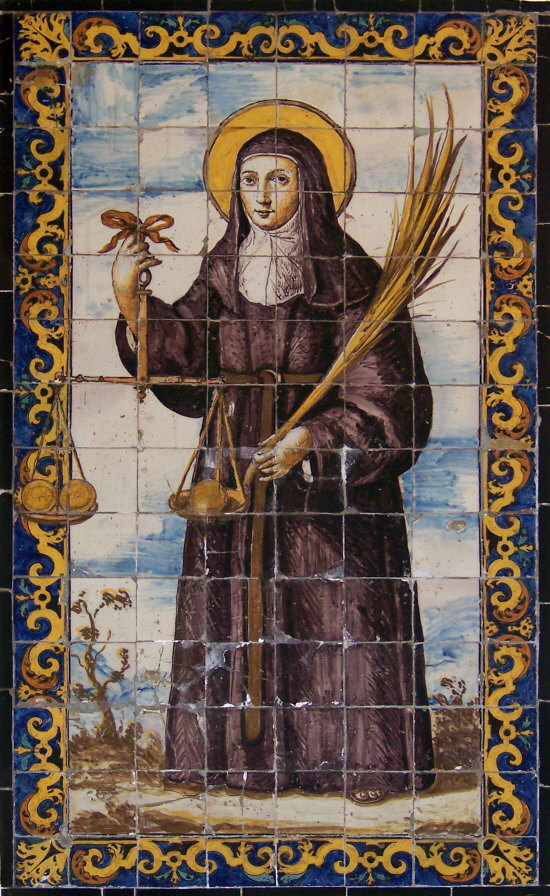 The crucifix reportedly found within Clare’s heart is about the size of a thumb.   Christ’s head leans slightly towards the right arm of the crucifix and his body is white, except for the “tiny aperture in the right side which is a livid reddish color.   The scourge and crown of thorns are apparently formed by whitish nerve fibers and the three nails are formed of a dark fibrous tissue.

The body of Saint Clare is now reduced to bones.   A statue of her body is on display to pilgrims in the crypt of the Basilica of St Clare in Montefalco in a glass sarcophagus, the bones are on display in the rear of the sarcophagus but can only be seen by nuns who have access to the rear of the crypt.   Her heart is displayed for veneration at the same church.

The Canonisation process was initiated in 1328 but it was not until 13 April 1737, that Clare was Beatified by Pope Clement XII.   On 8 December 1881, the feast of the Immaculate Conception, Pope Leo XIII Canonised Clare as Saint Clare of the Cross of Montefalco at Saint Peter’s Basilica in Rome.   She was recognised as an Augustinian rather than a Franciscan. 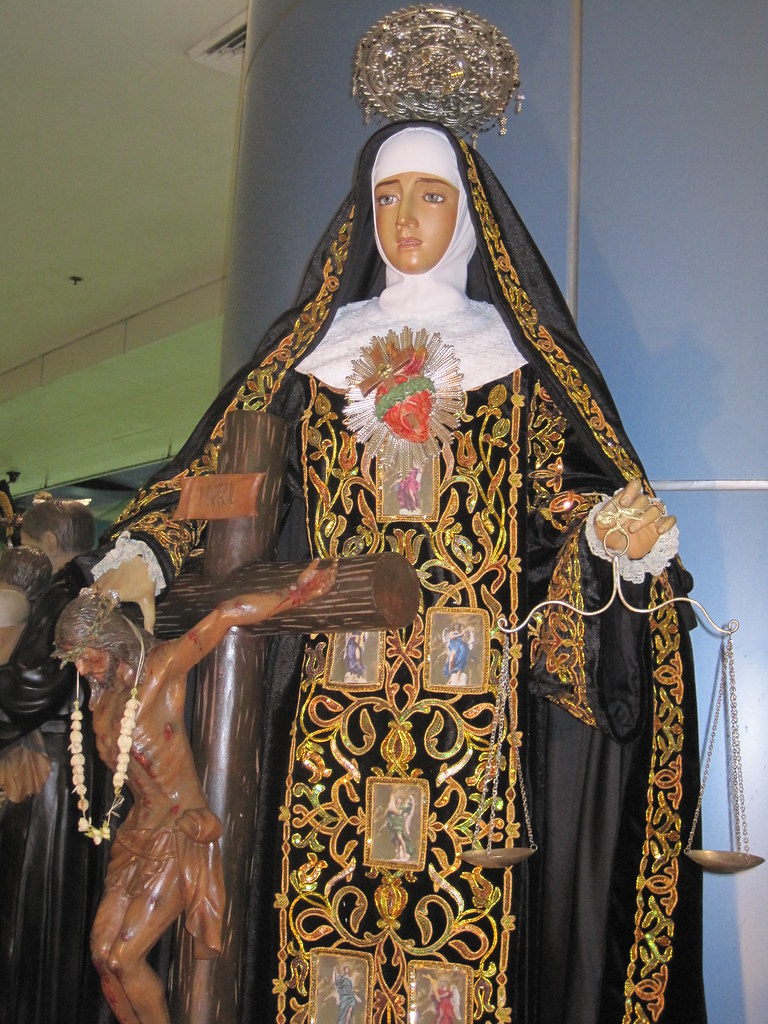