Thursday of the Second Week of Lent +2022

St Gertrude of Nivelles OSB (626-659) Benedictine Nun and Abbess, who, with her mother Itta, founded the Abbey of Nivelles located in present-day Belgium.
About St Gertrude:
https://anastpaul.wordpress.com/2018/03/17/saint-of-the-day-17-march-st-gertrude-of-nivelles-o-s-b-626-659/

St Jan Sarkander (1576-1620) Priest and Martyr of the seal of confession, Confessor – born on 20 December 1576 at Skotschau (Skoczow), Austrian Silesia (in modern Poland) and died by being covered in flammable material and set on fire on 17 March 1620 at Olomouc, Moravia (in the modern Czech Republic). Patronages – the Seal of Confession, Confessors, Moravia, Persecuted Christians.
This amazing Saint’s Life and Death:
https://anastpaul.com/2020/03/17/saint-of-the-day-17-march-saint-jan-sarkander-1576-1620-priest-and-martyr-of-the-seal-of-confession/

Martyrs of Alexandria – Also known as Martyrs of Serapis: An unknown number of Christians who were Martyred together by a mob of worshippers of the Graeco-Egyptian sun god Serapis. They were Martyred in c 392 in Alexandria, Egypt.

During the difficult times of Oliver Cromwell, one of the bishops who was forced to leave Ireland, was Bishop Lynch, Bishop of Clonfert. He travelled about Europe and finally came to Hungary in 1654. He was kindly received by Bishop John Pusky, Bishop of Gyer and eventually became auxiliary Bishop of the Diocese of Gyer.
Ten years later Bishop Lynch planned to return to his native land. Almighty God prevented this; during his dying hours he gave to the Bishop of Gyer, his only material treasure – the picture of the Madonna of Ireland. Soon after, as a memory of the Irish Bishop, the painting of Our Lady was hung on the wall of the Cathedral at Gyer.
Years passed. On the Feast of Saint Patrick, while large numbers of the faithful were present in the Cathedral, an awe-inspiring event took place. A bloody sweat was observed to come over the figure of the Blessed Lady in the picture. Drops of blood fell onto the Infant Jesus; as the bleeding continued for three hours. Linen towels, which are still retained under glass at her Shrine, were used to wipe the blood from the blood-perspiring face.
In the archives of the Cathedral of Gyer, there is a document written in 1697 on parchment, relating this event. It is signed, not only by the clergy and the laity who were present at the Mass but by the mayor and the councilmen, by the governor, Lutheran and Calvanist preachers, a Rabbi – over one hundred signatures represent eye-witnesses to the miracle. In 1874, Pope Pius IX granted a plenary indulgence on the feasts of Saint Patrick and the Assumption, before which Feasts public novenas are held. Below is the Shrine in Gyer Cathedral.

In 1913 Archbishop Schrembs of Toledo, visited Gyer in Hungary. He saw the beautiful painting and was deeply moved when told of the wonderful event. He requested a copy for the many Irish Catholics in his Diocese who would be happy to learn the history and to possess the picture of Our Lady of Ireland. The copy was placed face to face with the original and then given to Bishop Schrembs. On 23 August 1914, Archbishop Schrembs dedicated the new St Stephen’s Church in Toledo, Ohio. The Hungarian people had paid about 2/3 of the expenses of the building. The Bishop presented the Madonna to this church, saying:

“I am convinced that the picture will be treasured in a Hungarian Church just as much as it would be in an Irish one.”

Both Hungarians and Irish were thrilled.
The image depicts Mary crowned as Queen, Our Lady of Ireland, and before her, lying on several circular pillows, is the Infant, also crowned as the Little King and covered with royal robes.
__
St Patrick (c 386-461) (Optional Memorial)
About dearly loved St Patrick:
https://anastpaul.wordpress.com/2017/03/17/saint-of-the-day-17-march-st-patrick/

Martyrs of Alexandria – Also known as Martyrs of Serapis: An unknown number of Christians who were martyred together by a mob of worshippers of the Graeco-Egyptian sun god Serapis. They were Martyred in c 392 in Alexandria, Egypt.

Martyrs of Alexandria – Also known as Martyrs of Serapis: An unknown number of Christians who were martyred together by a mob of worshippers of the Graeco-Egyptian sun god Serapis. They were Martyred in c 392 in Alexandria, Egypt.


Martyrs of Alexandria – Also known as Martyrs of Serapis: An unknown number of Christians who were martyred together by a mob of worshippers of the Graeco-Egyptian sun god Serapis. They were Martyred in c 392 in Alexandria, Egypt

Saint of the Day – 17 March – St Gertrude of Nivelles O.S.B. (626-659) was a 7th-century Religious Abbess who, with her mother Itta, founded the Abbey of Nivelles located in present-day Belgium.   She was born in 626 at Landen, Belgium and died on 17 March 659 at Nivelles, Belgium of natural causes.   Patronages – against fear of mice and rates, against suriphobia, fever, mental disorders, insanity, of cats, of gardeners, innkeepers, hospitals, the mentally ill, pilgrims, travellers, suriphobics, sick, poor, prisoners, Landen, Belgium, Nivelles, Belgium, Wattenscheid, Germany.   Attributes – a nun with a crosier, with cats, with mice, a woman spinning. 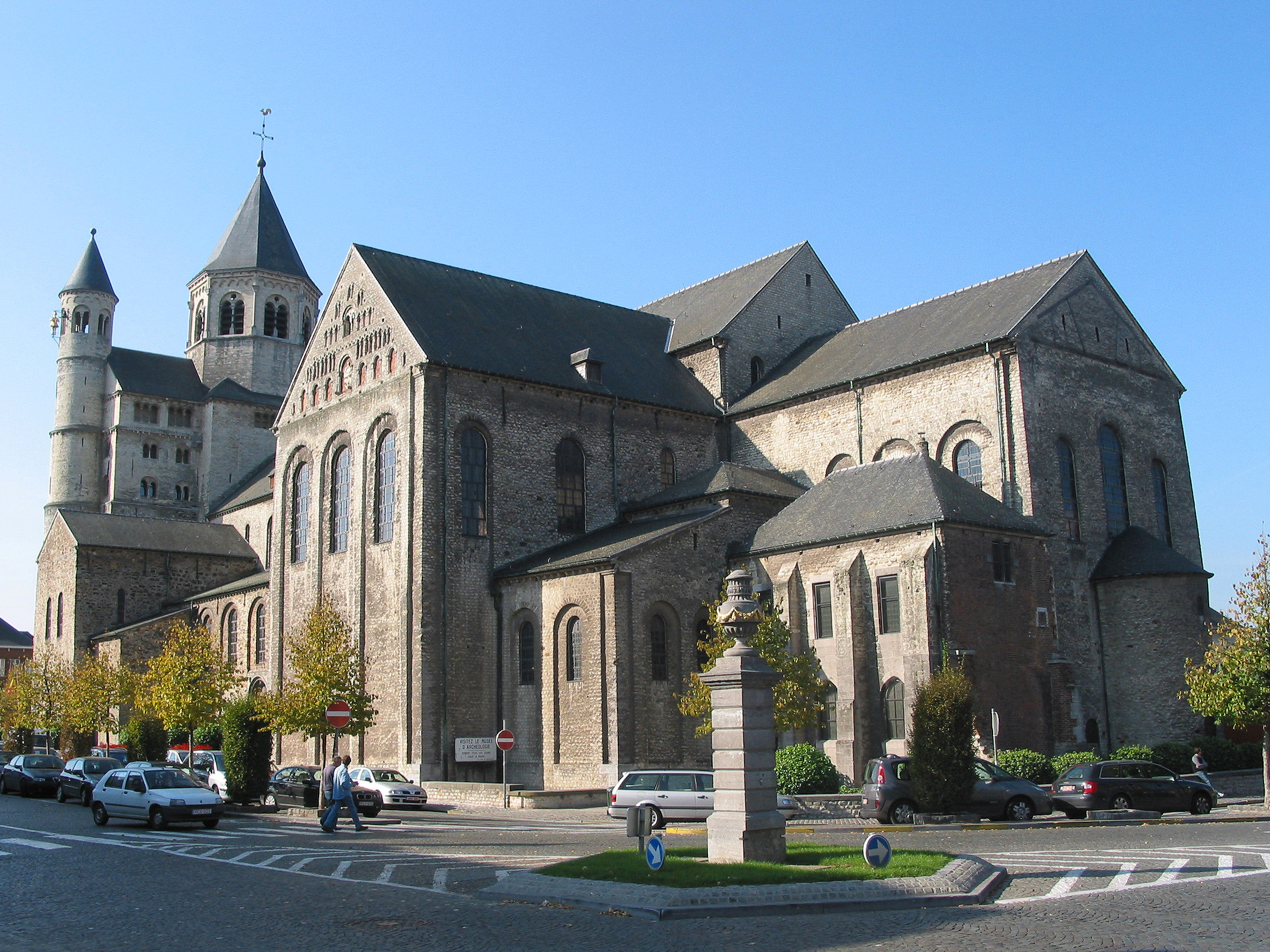 Our Saint was born at Landen, Belgium in 626 and died at Nivelles, 659;  she was just thirty-three, the same age as Our Lord.   Both her parents, Pepin of Landen and Itta were held to be holy by those who knew them;  her sister Begga is numbered among the Saints.   On her husband’s death in 640, Itta founded a Benedictine monastery at Nivelles, which is near Brussels and appointed Gertrude its abbess when she reached twenty, tending to her responsibilities well, with her mother’s assistance and following her in giving encouragement and help to monks, particularly Irish ones, to do missionary work in the locale. 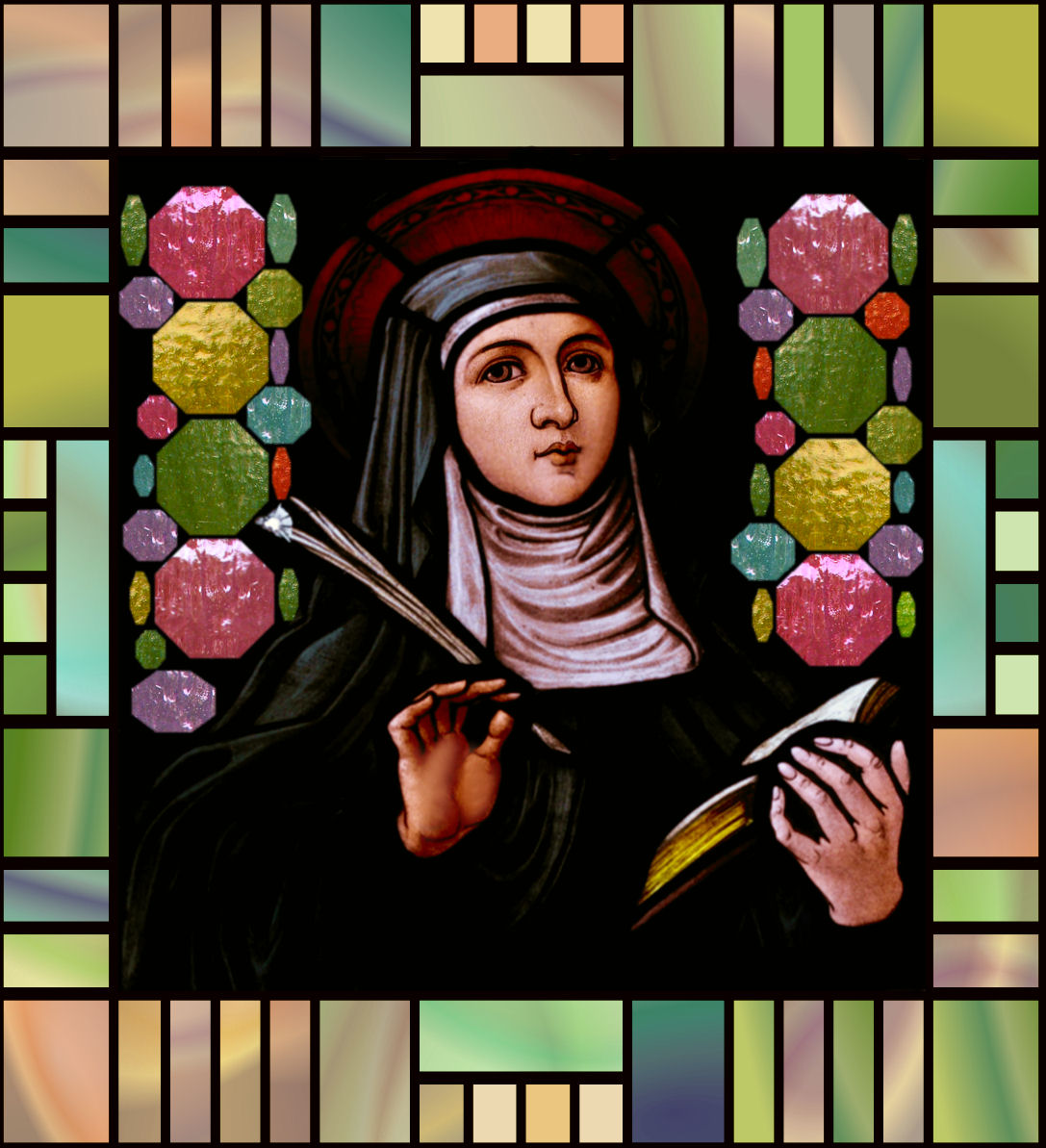 Saint Gertrude’s piety was evident even when she was as young as ten, when she turned down the offer of a noble marriage, declaring that she would not marry him or any other suitor:  Christ alone would be her bridegroom.

She was known for her hospitality to pilgrims and her aid to missionary monks.   She gave land to one monk so that he could build a monastery at Fosse.   By her early thirties Gertrude had become so weakened by the austerity of abstaining from food and sleep that she had to resign her office and spent the rest of her days studying Scripture and doing penance.   It is said that on the day before her death she sent a messenger to Fosse, asking the superior if he knew when she would die. 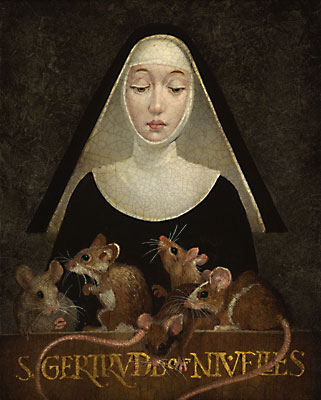 His reply indicated that death would come the next day during holy Mass-the prophecy was fulfilled.   Her feast day is observed by gardeners, who regard fine weather on that day as a sign to begin spring planting.

Devotion to St. Gertrude became widely spread in the Lowlands and neighbouring countries.

Commonly seen running up her pastoral staff or cloak are hopeful-looking mice representing Souls in Purgatory, to which she had an intense devotion, just as with St Gertrude the Great.   Even as recently as 1822, offerings of mice made of gold and silver were left at her shrine.   Another patronage is to travellers on the high seas.   It is held that one sailor, suffering misfortune while under sail, prayed to the Saint and was delivered safely.

Just before her death in 659, Gertrude instructed the nuns at Nivelles to bury her in an old veil left behind by a travelling pilgrimess and Gertrude’s own hair shirt.   Gertrude’s choice of burial clothing is a pattern in medieval hagiography as an expression of humility and piety.   Her death and the image of her weak and humble figure is in fact a critical point in her biographer’s narrative.   Her monastery also benefited from this portrayal because the hair cloth and veil in which Gertrude was interred became relics.  At Nivelles, her relics were only publicly displayed for feast days, Easterand other holy days.