“Blessed are the pure in heart, for they shall see God.” … Matthew 5:8

REFLECTION – “There is nothing so beautiful as a soul that is pure.   If we understood this, we would be incapable of losing our purity.   A pure soul is like a beautiful pearl.   So long as it is concealed in a shell at the bottom of the sea, no-one thinks of admiring it.   But if you display it in the sun then this pearl shines and draws people’s eyes. Purity comes from heaven, we have to ask God for it.   If we ask for it we shall get it.   We must take great care not to lose it.   It closes our hearts to pride, sensuality and every other passion.

Children, we cannot understand the power that a pure soul has over the Good God – it gets all it wants.   Before God, a pure soul is like a child before it’s mother, it caresses her and hugs her and it’s mother returns it’s caresses and embraces.

To preserve our purity there are three things – the Presence of God, prayer and the sacraments.” … St John-Marie Baptiste Vianney (1786-1859) Curé d’Ars – Selected thoughts of the Curé d’Ars

PRAYER – Lord God and Father, grant us we pray, a heart like Your divine Son’s – His Sacred Heart is our standard and our goal – grant us a heart made of flesh, pure and beautiful in Your sight.   May we ever seek Your Face and follow the love with which the Sacred Heart of Jesus guides our way.   May the prayers of St Medan today, help us to be Your children, pure in heart.    Through Christ our Lord, in the unity of the Holy Spirit, one God forever and ever, amen.

Saint of the Day – 8 June – Saint Medard (c 456-545) Bishop and Confessor, Apostle of the poor  – born in c 456 at Salency, Picardy, France – died on 8 June 545 at Noyon, France of natural causes.   Patronages – the weather, invoked against toothache.  St Medard was one of the most honoured Bishops of his time, often depicted laughing, with his mouth wide open and therefore he was invoked against toothache.

Saint Medard, one of the most illustrious prelates of the Church of France in the sixth century, was born of a pious and noble family, at Salency, about the year 457.   From his childhood, he displayed the tenderest compassion for the poor.   On one occasion he gave his coat to a destitute blind man and when asked why he had done so, he answered, that the misery of a fellow-member in Christ, so affected him that he could not help giving him part of his own clothes.

Being promoted to the Priesthood in the thirty third year of his age, he became a bright ornament of that sacred order.   He preached the word of God with an unction which touched the hearts of the most hardened and the influence of his example, by which he enforced the precepts which he delivered from the pulpit, seemed irresistible.

In 530, Alomer, the thirteenth bishop of that country, died.   St Medard was unanimously chosen to fill the see and was consecrated by St Remigius, who had Baptised King Clovis in 496, and was then exceeding old.   Our Saint’s new dignity did not make him abate any of his austerities and, though at that time, seventy-two years old, he thought himself obliged to redouble his labours.

Though his Diocese was very wide, it did not suffice his zeal, which could not be contained, when he saw the opportunity of advancing the honour of God and of abolishing the remains of idolatry.   He overcame all obstacles and by his zealous labours and miracles, the rays of the Gospel dispelled the mists of idolatry throughout the whole extent of his Diocese.   What rendered this task more difficult and perilous, was the savage and fierce disposition of the ancient inhabitants of Flanders, who were the most barbarous of all the nations of the Gauls and Franks. 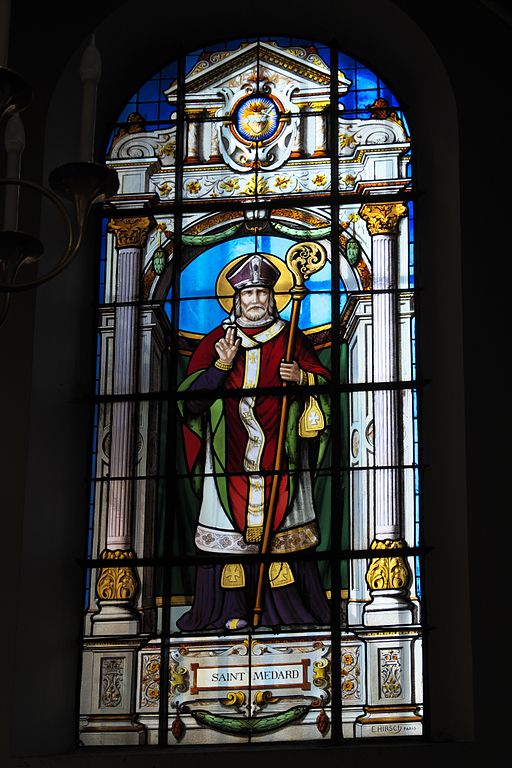 In 545, our Saint, having completed this great work in Flanders, returned to Noyon, where shortly after, he fell ill and soon rested from his labours at an advanced age.   The whole kingdom lamented his death as the loss of their common father and protector.   His body was buried in his own Cathedral but the many miracles wrought at his tomb so moved King Clotaire that he transferred the precious remains to Soissons.   The Statue and the Gospel book below belonged to St Medard and reside at Soissons.

As a child, St Medardus was said to have once been sheltered from rain by an eagle which hovered over him. This is how he was most commonly depicted and is why he is associated with weather, good or bad and why he is held to protect those who work in the open air. The French rhyme is: Quand il pleut à la Saint-Médard, il pleut quarante jours plus tard (If it rains on St Medardus’ Day, it rains for forty days more). 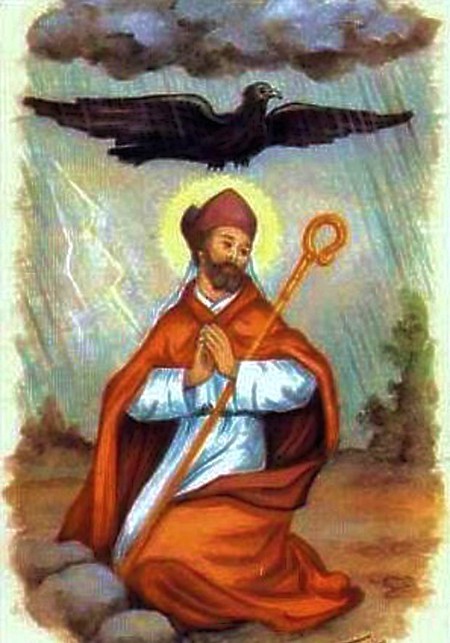 Every year at Salency (Medardus’ birthplace) near Noyon, France (and certain other villages) “the most virtuous young girl of the year” of the community is elected the Rosière.   The custom is said to have been started by St Médard himself and the first Rosaire is said to have been his sister, Sainte Médrine.   Clothed in a long white dress, the Rosière is escorted to Mass by 12 young girls dressed in white and 12 young boys. After Mass, accompanied by two godmothers, she is crowned with a crown of 12 roses, decorated a blue ribbon and a silver ring, at the chapel of St Médard.   Then she goes to receive a bouquet of roses from the mayor, who also presents her with two arrows, two tennis balls and a whistle.   She blows the whistle three times and throws nuts to the assembled crowd.   The procession is followed by a fair with rides, stalls and fireworks.

Our Lady of Sunday:  Also known as Notre-Dame du Dimanche
About the Apparition:
An apparition of the Blessed Virgin Mary to Auguste Arnaud on 8 June 1873 and 8 July 1873. Arnaud was married, the father of two, and a winemaker who regularly skipped Sunday Mass to work his vineyards. Our Lady appeared to him in the vineyard on 8 June and reminded him “You must not work on Sundays.”   In honour of this blessing, Arnaud placed a Cross and a Statue of Mary at the site in the field.   On 8 July Our Lady appeared again, this time to both Auguste and his neighbours who had gathered there and told them, “You must never work on Sunday!   Blessed are those who believe.”
Dates: 8 June and 8 July in 1873
Location: vineyard in Saint-Bauzille-de-la-Sylve, l’Hérault, France
Approval: 1876 by Bishop de Cabrières