Saint of the Day – 30 April – Saint Pope Pius V OP (1504-1572) – born Antonio Ghislieri (from 1518 called Michele Ghislieri, OP) 17 January 1504 at Bosco, diocese of Alessandria, Lombardy, Italy, was head of the Catholic Church and ruler of the Papal States from 8 January 1566 to his death in 1572.   He died on 1 May 1572 in Rome, Italy, apparently of a renal disorder caused by kidney stones.   He was a reformer, an apostle of prayer and charity, a great organiser, Marian devotee and apostle of the Holy Rosary, lover of the Holy Cross.  Pius V was highly ascetic.

He wore a hair shirt beneath the simple habit of a Dominican friar (for which reason he is often attributed with the institution of the White cassock worn by the Holy Father) and was often seen in bare feet.  In the time of a great famine in Rome he imported corn at his own expense from Sicily and France, a considerable part of which he distributed among the poor and sold the rest to the public at a very low price.  After the papal election, instead of hosting an elaborate banquet, he ordered that the food be given to people in real need.   Tradition holds that he once restored a beggar’s severed foot. 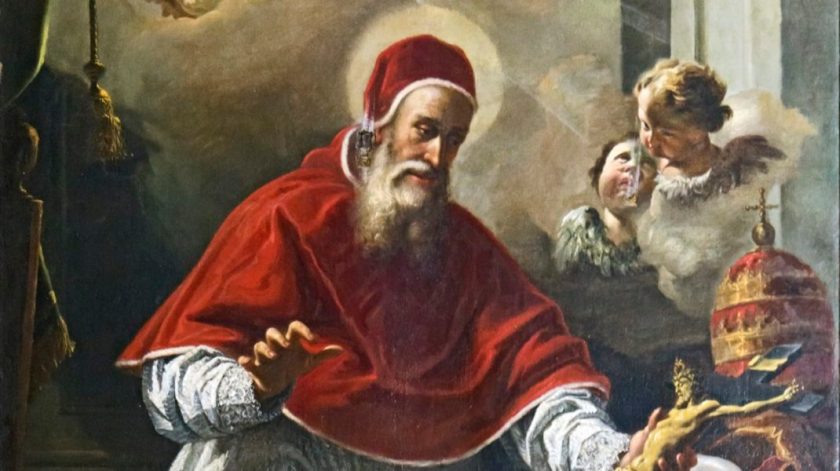 He is chiefly notable for his role in the Council of Trent, the Counter-Reformation, the Battle of Lepanto and the standardisation of the Roman rite within the Latin Church. Pius V declared Thomas Aquinas a Doctor of the Church.

As a cardinal, Ghislieri gained a reputation for putting orthodoxy before personalities, prosecuting eight French bishops for heresy.   He also stood firm against nepotism, rebuking his predecessor Pope Pius IV to his face when he wanted to make a 13-year-old member of his family a cardinal and subsidise a nephew from the papal treasury.

By means of the papal bull of 1570, Regnans in Excelsis, Pius V excommunicated Elizabeth I of England for heresy and persecution of English Catholics during her reign. He also arranged the formation of the Holy League, an alliance of Catholic states to combat the advancement of the Ottoman Empire in Eastern Europe.

Although outnumbered, the Holy League famously defeated the Ottomans at the Battle of Lepanto in 1571.   St Pius V attributed the victory to the intercession of the Blessed Virgin Mary and instituted the feast of Our Lady of Victory.   Biographers report that as the Battle of Lepanto ended, Pius rose and went over to a window, where he stood gazing toward the East. “…Looking at the sky, he cried out, ‘A truce to business, our great task at present is to thank God for the victory which He has just given the Christian army’.”

Pope Pius V was from a poor Italian family and had entered the Dominican order at age 14.   A teacher, a master of novices, a bishop and finally a cardinal, he was a strict and honest man, as well as a zealous reformer.   He wept when he was told in 1566 that he had been elected pope.   The 18-year-long Council of Trent had ended 3 years before and he, as Holy Father, had the task of implementing it.

The previous pope had been easygoing but Pius V made immediate changes.   At first, the people complained that the atmosphere of Rome became like that of a monastery.   But soon the pope’s personal character changed their minds.   He ordered that the gifts given at his coronation be sent to hospitals and to those in need.   The Church finances were examined, the army was reduced and the lifestyles of the cardinals and bishops were simplified.   Seminaries were established, synods were held, dioceses were organised, and parish priests were called to regular meetings.   A new catechism was completed.   Parish priests were made responsible for Catholic education.   The Roman Missal became the sole Mass book for the Western Church (with a few minor exceptions) for four centuries.

His first care as Pope was to reform the Roman court and capital by the strict example of his household and the severe punishment of all offenders.   He next endeavoured to obtain from the Catholic powers the recognition of the Tridentine decrees, two of which he urgently enforced-the residence of bishops and the establishment of diocesan seminaries. 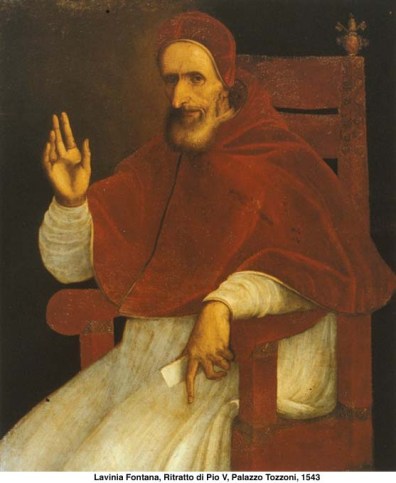 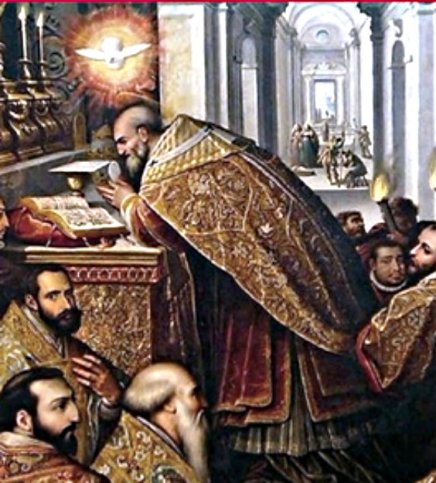 He revised the Missal and Breviary and reformed the ecclesiastical music.   Nor was he less active in protecting the Church.

We see him at the same time supporting the Catholic King of France against the Huguenot rebels, encouraging Mary Queen of Scots, in the bitterness of her captivity and excommunicating her rival the usurper Elizabeth, when the best blood of England had flowed upon the scaffold and the measure of her crimes was full.

But it was at Lepanto that the Saint’s power was most manifest, there, in October, 1571, by the holy league which he had formed but still more by his prayers to the great Mother of God, the aged Pontiff crushed the Ottoman forces and saved Christendom from the Turk.

St Pius was accustomed to kiss the feet of his crucifix on leaving or entering his room. One day the feet moved away from his lips.   Sorrow filled his heart and he made acts of contrition, fearing that he must have committed some secret offence but still he could not kiss the feet.   It was afterwards found that they had been poisoned by an enemy.

After only six years as pope, Pius V died of a painful disease, of which he had never complained.   He was buried in the chapel of St Andrea which was close to the tomb of Pope Pius III, in the Vatican. Although his will requested he be buried in Bosco, Pope Sixtus V built a monument in the chapel of SS. Sacramento in the Liberian basilica. His remains were transferred there on 9 January 1588.  The front of his tomb has a lid of gilded bronze which shows a likeness of the dead pope. Most of the time this is left open to allow the veneration of the saint’s remains.

In 1696, the process of Pius V’s canonisation was started through the efforts of the Master of the Order of Preachers, Antonin Cloche.   He also immediately commissioned a representative tomb from the sculptor Pierre Le Gros the Younger, to be erected in the Sistine Chapel of the Basilica di Santa Maria Maggiore.   The pope’s body was placed in it in 1698.   Pope Pius V was beatified by Pope Clement X in the year 1672 and was Canonised by Pope Clement XI (1700–21) on 22 May 1712.

“St Pius V was stern and severe, as far as a heart burning and melted with divine love could be so … Yet such energy and vigour as his were necessary for the times.   He was a soldier of Christ in a time of insurrection and rebellion, when in a spiritual sense, martial law was proclaimed.”

Our Lady, Mother of Africa:  (Feast) North Africa, the land of Saints Monica, Augustine, among others, as part of Roman Empire began to become Christian in the 3rd century under Emperor Constantine.   It remained Christian until the Arab invasions in later centuries.   The French re-established themselves early in the 19th century.
The first bishop, Bishop Dupuch found it impossible to build a church because the local population was hostile to the French.   He went back to France for assistance. The Sodality of Our Lady in Lyon offered to the bishop a bronze statue of the Immaculate Conception with the understanding that she would be the Protectress of both the Mohammedans and the natives.   It was brought from France in 1840 and was entrusted to the Cistercian monks of Staueli. Later, Cardinal Lavigiers, founder of the White Sisters, enshrined it in the new basilica at Algiers, where in 1876 the image was crowned. This bronze statue, very dark in colour, is known as Our Lady of Africa.
Pilgrims began to come to venerate the image where the lame, the blind and the crippled were miraculously healed and sailors came also, to beg for protection of their long and perilous voyages.   At this and other North African shrines the veneration given to Mary by Mohammedans is very marked.   This feast commemorates the crowning of the Algiers statue.