The Assumption of the Blessed Virgin Mary 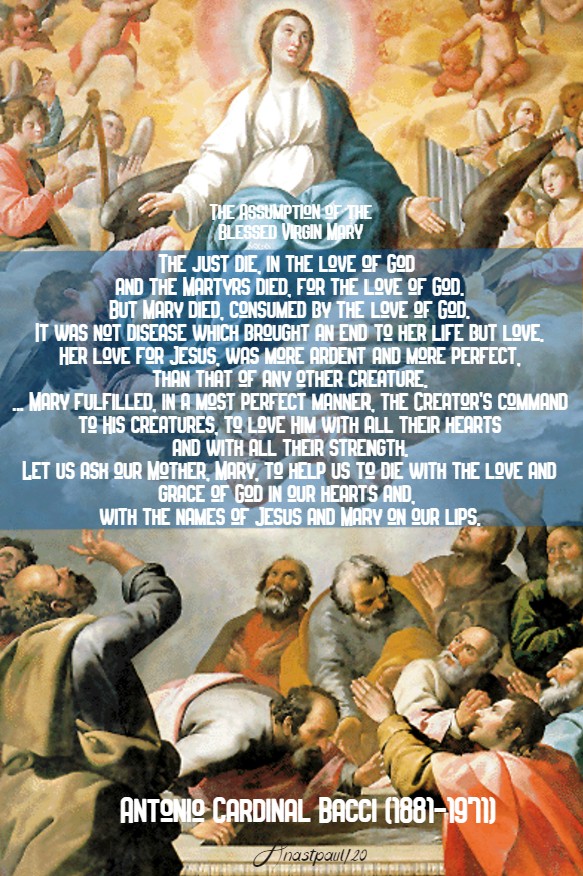 “It is generally believed that Our Blessed Lady died, since she would not have wished to escape death anymore than her divine Son did.
Our Lord, however, had see her sharing in His agony and death upon Mount Calvary and He willed that her own death would be so peaceful as hardly to justify the name.

The just die, in the love of God and the Martyrs died, for the love of God.
But Mary died, consumed by the love of God.
It was not disease which brought an end to her life but love.
Her love for Jesus, was more ardent and more perfect, than that of any other creature.
She loved Him, when she held Him in her arms in the stable at Bethlehem, when she fled with Him into Egypt and, when she offered Him in the temple to His heavenly Father.
She loved Him, when she found Him after He had been lost and when she looked after Him in their home at Nazareth.
She loved Him, as she followed Him to His death on Calvary.
She loved Him, in the joy of His Resurrection and, subsequently, of His Ascension into Heaven.
Jesus desired her to remain on earth for a while, to comfort the infant Church and to initiate the loving patronage which she would exercise over it, in Heaven.
Her love grew, from day to day, until it entirely consumed her and her Immaculate Heart could no longer contain it.
Mary fulfilled, in a most perfect manner, the Creator’s command to His creatures, to love Him with all their hearts and with all their strength.
Consequently, her love reached such a peak, that her soul, in it’s final ecstasy, glided from her body.

Let us ask our Mother, Mary, to help us to die with the love and grace of God in our hearts and, with the names of Jesus and Mary on our lips.”