The Holy Spirit
Only one thing is important: eternal salvation. Only one thing, therefore, is to be feared: sin. Sin is the result of ignorance, weakness and indifference. The Holy Spirit is the Spirit of Light, of Strength and of Love. With His sevenfold gifts He enlightens the mind, strengthens the will and inflames the heart with the love of God. To ensure our salvation we ought to invoke the Divine Spirit daily, because the Spirit comes to us in our needs. When we don’t know what to say, it is the Spirit who speaks within us. 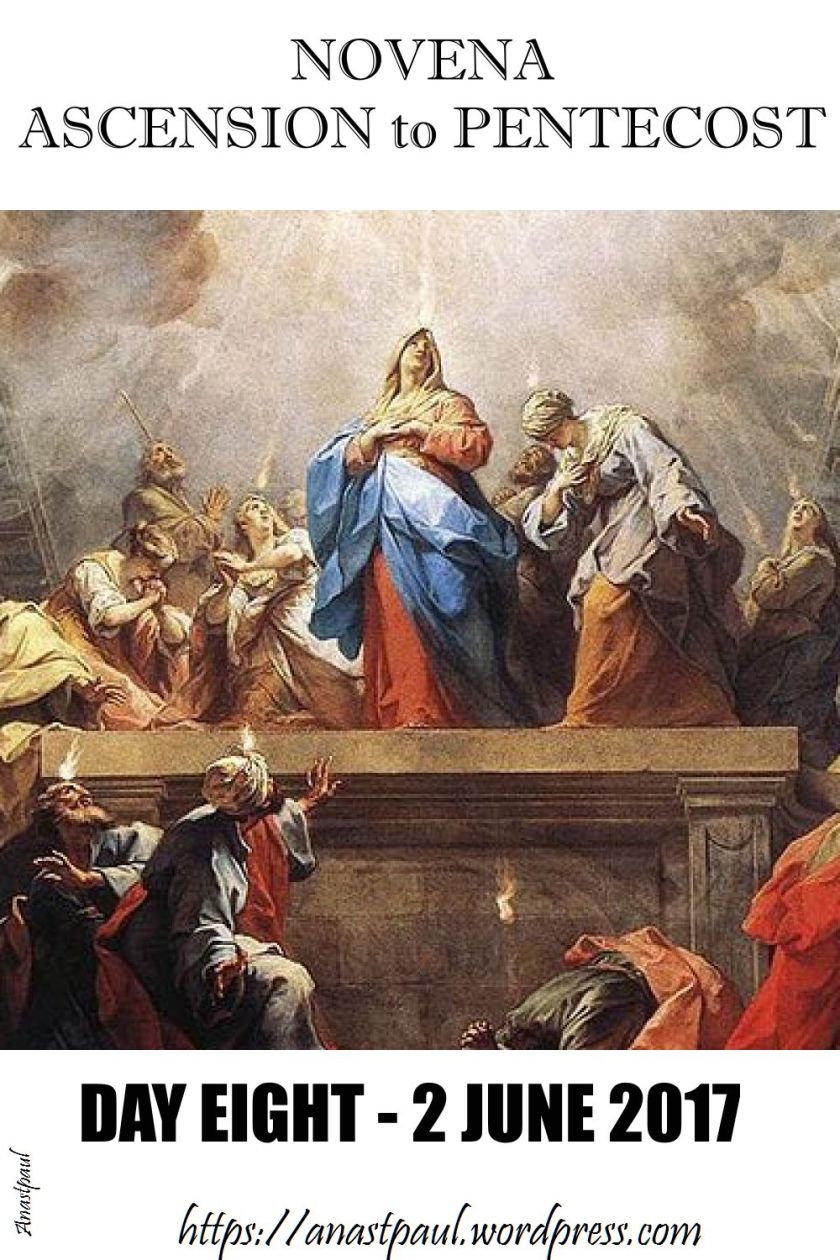 The Gift of Wisdom
Embodying all the other gifts, as charity embraces all the other virtues, Wisdom is the most perfect of the gifts.   Of wisdom it is written “all good things came to me with her, and innumerable riches through her hands.”   It is the gift of Wisdom that strengthens our faith, fortifies hope, perfects charity and promotes the practice of virtue in the highest degree.   Wisdom enlightens the mind to discern and relish things divine, in the appreciation of which earthly joys loose their attraction, while the Cross of Christ reveals a certain divine attraction according to the words of the Saviour: “Take up your cross and follow me, for my yoke is sweet and my burden light.”

Prayer
Come and fill me, O Spirit of Wisdom and reveal to my soul the mysteries of heavenly things, in their exceeding greatness, power and beauty.   Teach me to love them above and beyond all the passing joys and satisfactions of earth and to prefer your wisdom over the so-called wisdom of this world.   Help me to grow in your wisdom, especially during temptations, trials and all the daily challenges that I face. Amen.

Our Father, Hail Mary, Glory be to the Father

Prayer for the Seven Gifts of the Holy Spirit.

Prayer to the Holy Spirit

O God, who in Your love and mercy
was pleased to send missionaries to Uganda
to bring the light of Christ to all the peoples,
we thank You for the gift of the
Holy Martyrs of Uganda, our ancestors in faith,
whom You gave the strength to overcome sin and the
anguish of torture and to bear witness to the truth.
Mary, Mother of Sorrows!
Look with mercy on those who suffer.
Be close to the victims of violence and terror,
and console those who mourn.
May Jesus your Son grant comfort
and peace to all the sick and dying,
and may he strengthen those
devoted to their physical and spiritual care.
To the Holy Martyrs, we beg for intercession,
be pleased to hear our prayer and pray for us that this,
our special request may be granted
(make your intention)
Holy Martyrs of Uganda, we honour and praise you!
Please pray for us!
O heavenly Father, we make our prayer
through our Lord, Jesus Christ, in union with the Holy Spirit,
one God forever and ever, amen.

Thought for the Day – 2 June

Why are these men included in our Eucharistic prayer and given their own feast day, in spite of the fact that almost nothing is known about them?
Probably because the Church respects its collective memory.   They once sent an impulse of encouragement through the whole Church.   They made the ultimate step of faith……Fr. Don Miller, OFM
The foundation of our faith rests on the lives of these holy men and women of the early Church who willingly gave themselves over to the faith, courageous and joyful in their martyrdom.  When we consider the struggles of today and our own personal difficulties in daily life, we might pause to consider the sacrifice of these early martyrs and be inspired to greater faith, trust and love and be filled with that impulse of encouragement!

Sts Marcellinus and Peter, pray for us! 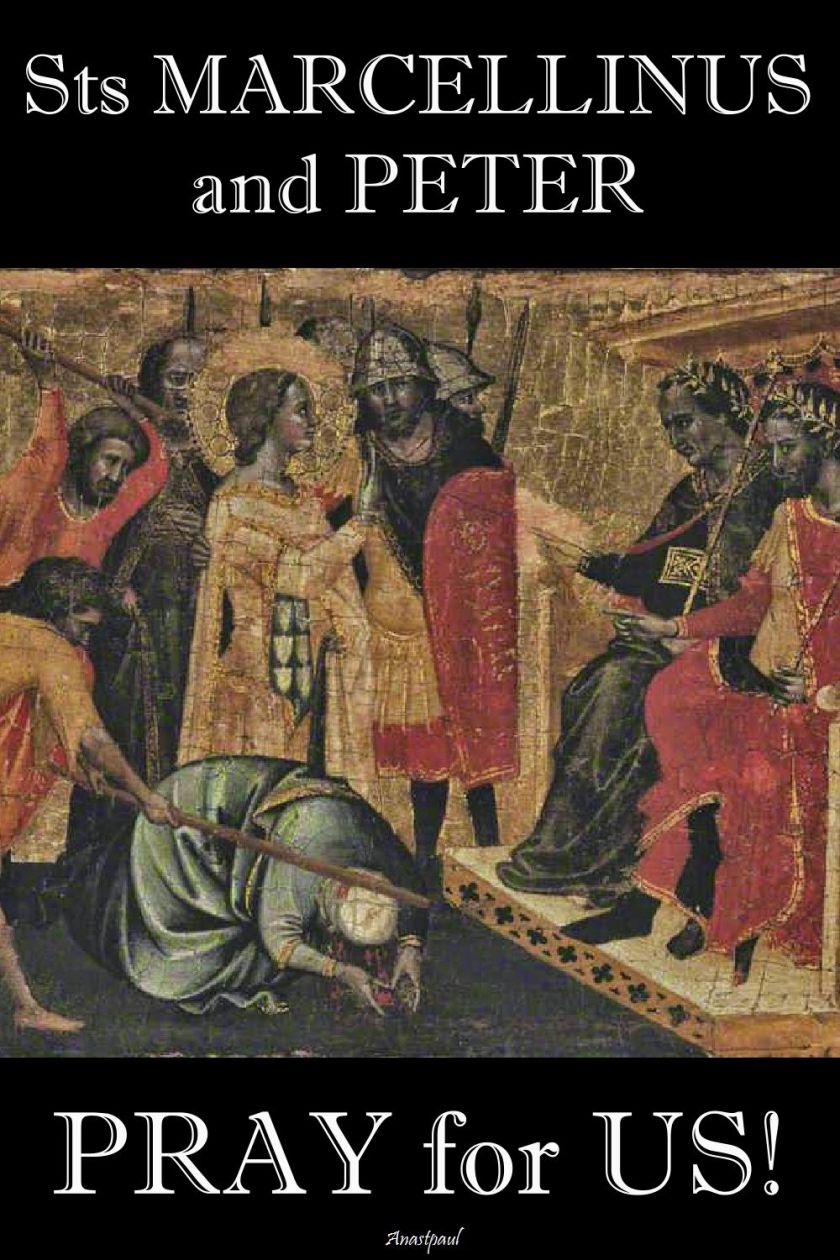 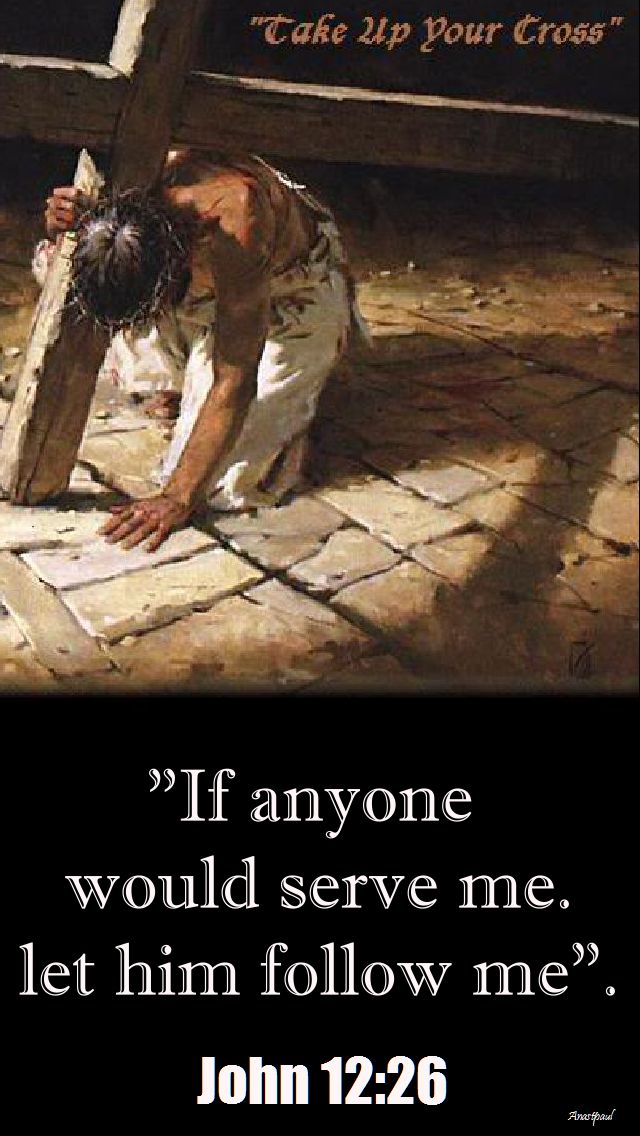 REFLECTION – “Do you wish to receive grace upon grace and to grow from virtue to virtue?
The make the Stations of the Cross every day!”………..St Bonaventure 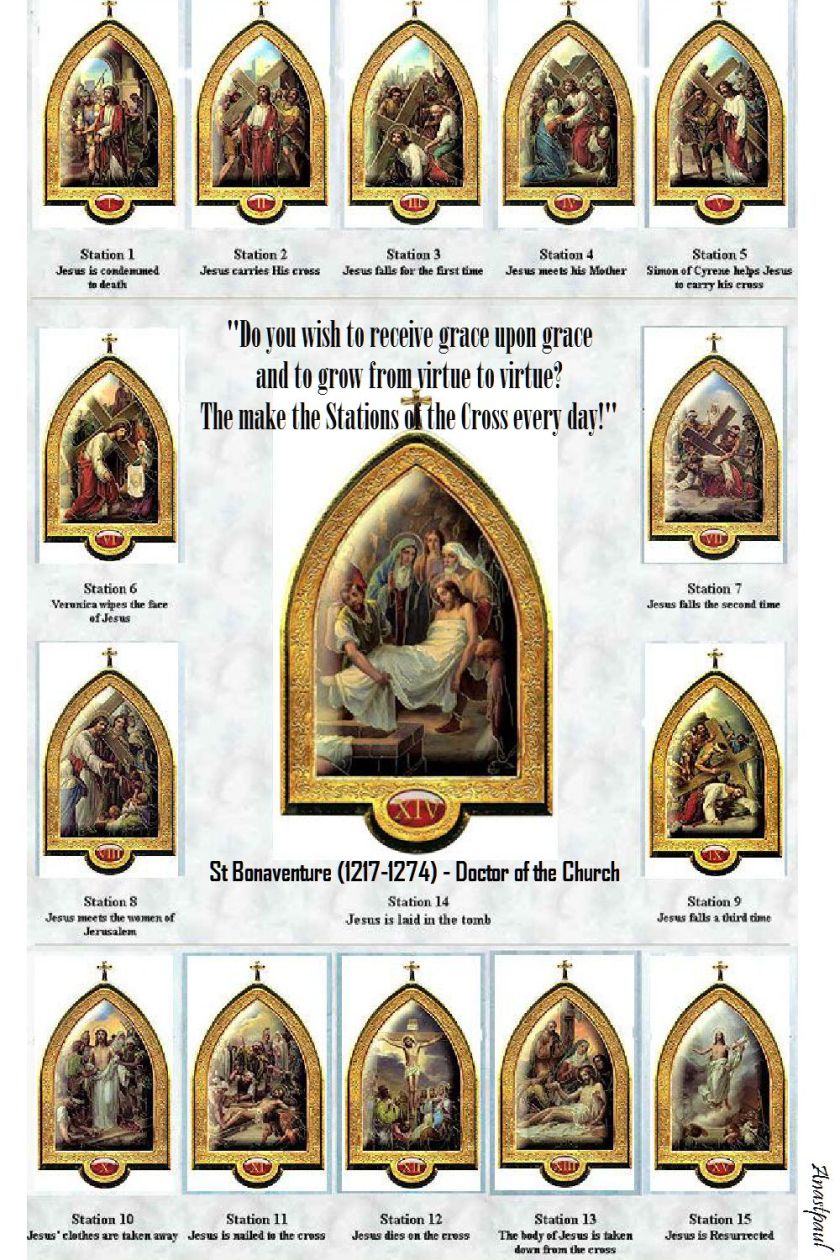 PRAYER – Lord Jesus, help me to make the Stations of the Cross frequently and even everyday if possible. Grant that in following You by this devotion, I may obtain the grace and courage to follow You in all the events of my life. Sts Marcellinus and Peter, you followed Christ in all things, giving your lives for love of Him, please pray for us all, amen! 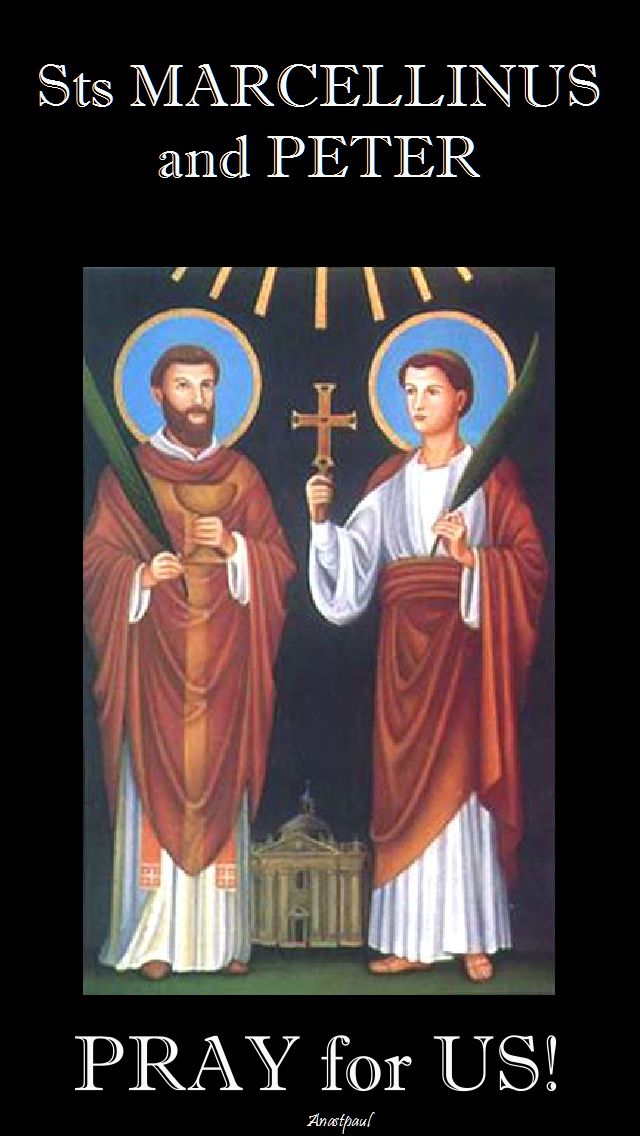 Breathe in me, O Holy Spirit
By St Augustine 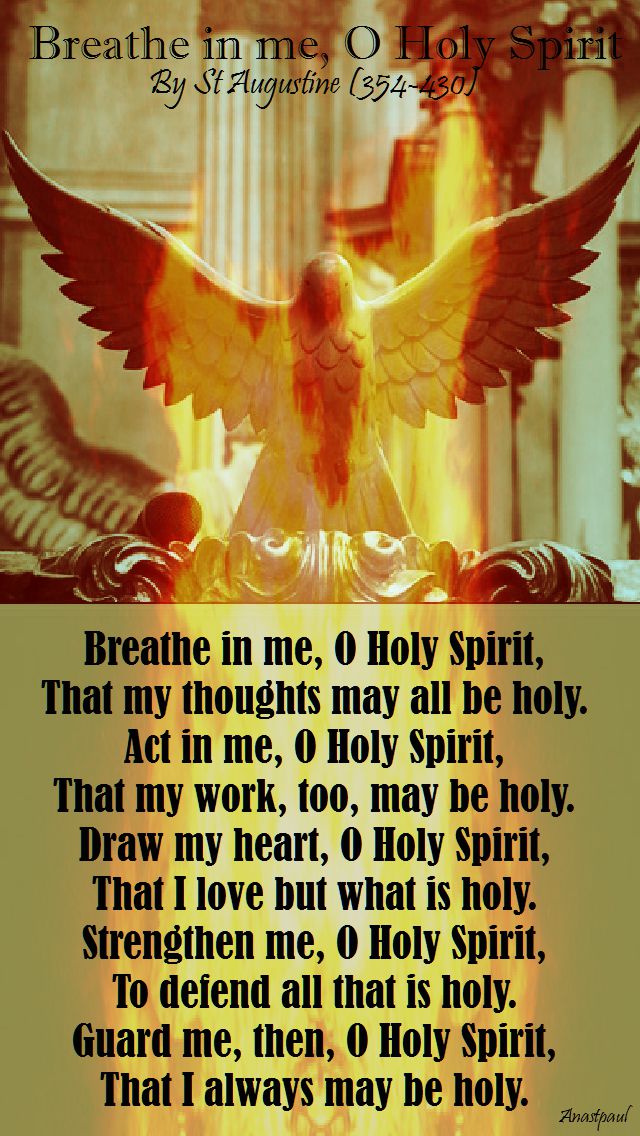 Saints of the Day – Sts Marcellinus and Peter – Martyrs/Priest and Exorcist (martyred in 304). 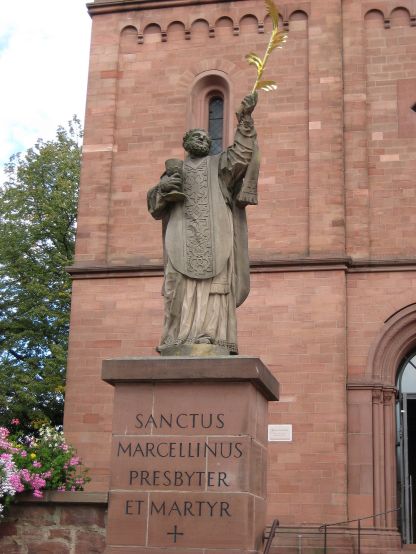 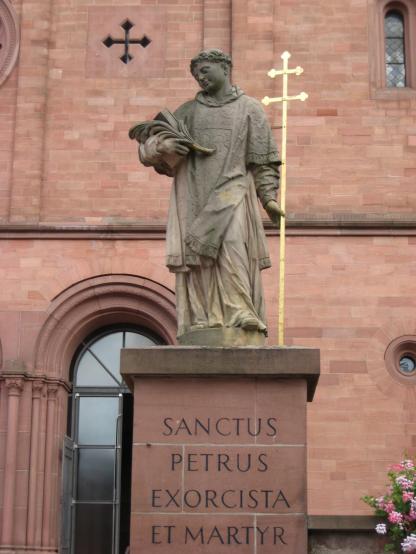 While very little is known today about the lives of these holy men, Marcellinus and Peter were prominent enough in the early Church to be included amongst the saints of the Roman Canon and their names continue to be mentioned during celebration of the Eucharist.   Further evidence of the veneration and respect of the Church lives on in the basilica that Emperor Constantine built over their tombs in Rome.

The story of the lives and martyrdom of Marcellinus and Peter was recorded by Pope Saint Damasus, who learned of their heroic acts directly from their executioner—a man who converted to Christianity shortly after their deaths.  According to the saintly pope, the executioner was deeply troubled following his role in the martyrdom and could not shake the feeling that a faith that had given Marcellinus and Peter such peace of mind and steady joy in the face of death must be authentic.

Marcellinus was a priest and Peter was an exorcist (authorised by the Church to work against demonic possession in individuals) who worked alongside him.   Imprisoned during the persecution of Christians under the reign of Diocletian, Marcellinus and Peter embraced their suffering, seeing it as an opportunity for evangelisation and quickly had converted the majority of prisoners in jail with them—including the jailor and his entire family.   This was accomplished when Peter set the daughter of the jailer free from an evil spirit which possessed her.   Shortly thereafter, the jailor, his wife and their other children were baptised into the faith—right in the cell of Peter and Marcellinus.

When Diocletian heard of their activities, he was greatly incensed and had them tortured, stripped naked and thrown into cells filled with only broken shards of glass. When it was observed that this only served to increase their faith and joy in suffering, he had them taken to the forest of Silva Nigra and dig their own graves.   Then, he had them beheaded in the forest, so that other Christians would not find their bodies, bury them properly, and then subsequently venerate them.   However, that was not to be the case. Shortly following their death, a Christian matron by the name of Lucilla learned of their martyrdom through a dream (or possibly a prophetic vision) and came with some fellow faithful to the gravesite.   The relics of the holy martyrs were removed and translated to a more proper burial place, a set of catacombs in Rome.   When Christianity was restored as a “legal” faith tradition under Constantine, he had a great basilica built in their honour over their tomb. 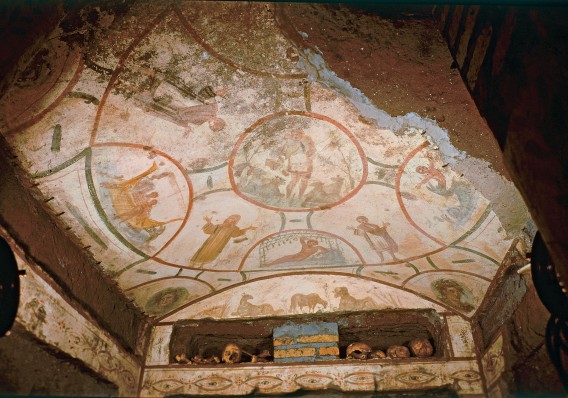 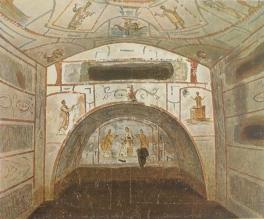 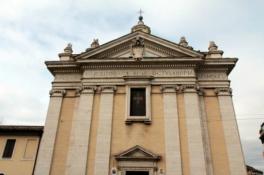 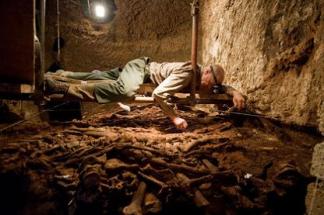 Excavation of the Catacombs of Sts Marcellinus & Peter 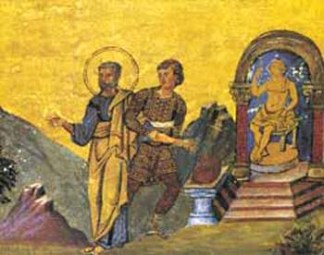 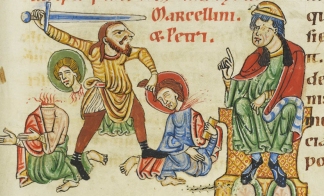 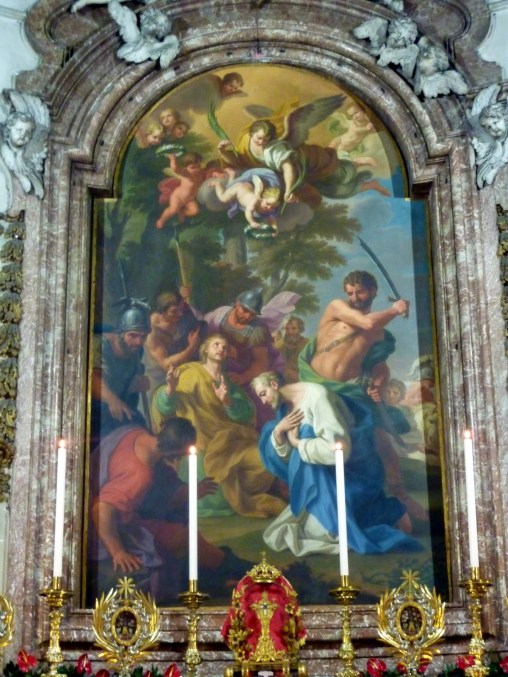 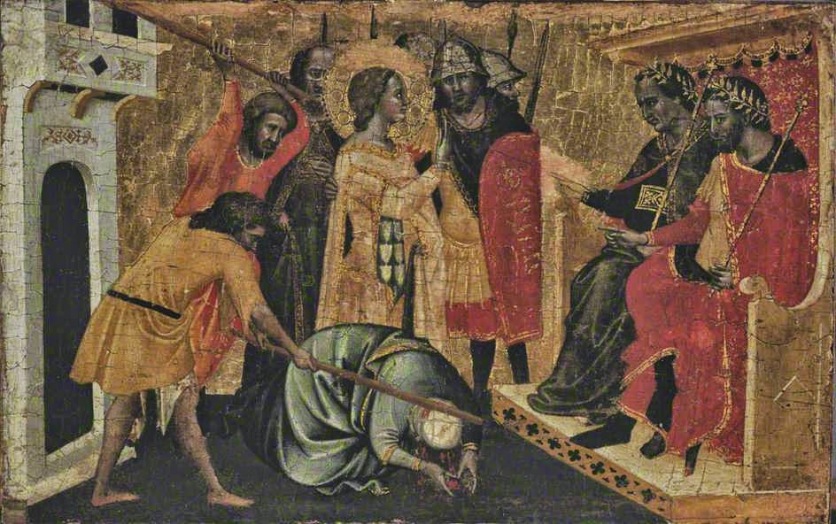 St Marcellinus (Optional Memorial)
St Peter the Exorcist (Optional Memorial)
Madonna of the Tears
—
St Ada of Ethiopia
St Adalgis of Thiérarche
St Armin of Egypt
St Barbarinus
St Blandina the Slave
St Bodfan of Wales
St Daminh Ninh
Bl Demetrios of Philadelphia
St Dorotheus of Rome
St Erasmus of Formiae
St Pope Eugene I,
St Evasius
Bl Giovanni de Barthulono
Bl Guy of Acqui
St Honorata
St Humatus
St John de Ortega
St Joseph Tien
St Nicholas Peregrinus
St Photinus of Lyons
St Rogate
Bl Sadoc of Sandomierz
St Stephen of Sweden
—
Martyrs of Lyons and Vienne: A group of 48 Christians from the areas of Vienne and Lyon, France, who were attacked by a pagan mob, arrested and tried for their faith, and murdered in the persecutions of Marcus Aurelius. A letter describing their fate, possibly written by Saint Irenaeus of Lyons, was sent to the churches in the Middle East. Only a few names and details of their lives have surived; some of them have separate entries on this date –
• Alexander of Vienne
• Attalus of Pergamos
• Biblis of Lyons
• Blandina the Slave
• Cominus of Lugdunum
• Epagathus of Lugdunum
• Maturus the Novice
• Photinus of Lyons
• Ponticus of Lugdunum
• Sanctius of Vienne
• Vettius of Lugdunum
They were martyred in assorted ways on on various during 177.

Martyrs of Sandomierz: A group of 49 Dominicans, some of whom received the habit from Saint Dominic de Guzman himself. They worked separately and together to bring the faith and establish the Dominican Order in Poland, basing their operations in and around Sandomierz. In 1260 they were all martyred by the Tartars as they were singing the Salve Regina at Compline; the custom of singing the Salve Regina at the deathbed of Dominicans stems from this incident. We know a few details about a few of the martyrs, but most survive only as names –
• Zadok
• Andrea, chaplain
• James, novice master
• Malachi, convent preacher
• Paul, vicar
• Peter, guardian of the garden
• Simone, penitentiary
friars
• Abel, Barnabas, Bartholomew, Clemente, Elia, John, Luke, Matthew, Philip
deacons
• Giuseppe, Joachim, Stefano
sub-deacons
• Abraham, Basil, Moses, Taddeo
clerics
• Aaron, Benedict, David, Dominico, Mattia, Mauro, Michele, Onofrio, Timothy
professed students
• Christopher, Donato, Feliciano, Gervasio, Gordian, John, Mark, Medardo, Valentino
novices
• Daniele, Isaiah, Macario, Raffaele, Tobia
lay brothers
• Cyril, tailor
• Jeremiah, shoemaker
• Thomas, organist
They were martyred in 1260 at Sandomierz, Poland and Beatified on 18 October 1807 by Pope Pius VII (cultus confirmation).