Announcing a Novena to SAINT ANTHONY FOR ALL OUR INTENTIONS

St Anthony of Padua is also known as Saint Anthony the Wonder-Worker and so it is no surprise that Catholics often turn to him with their requests—more often, perhaps, than to any other saint, with the exception of the Blessed Virgin Mary.    Best known as the patron saint of lost items, Saint Anthony is invoked for many other needs as well.   In this novena, or nine-day prayer, we not only ask for Saint Anthony’s intercession but promise to live more Christian lives.

Saint Anthony received an apparition of the Christ Child, Who, lying in the saint’s arms, kissed him and told St Anthony that He loved him for his preaching.   (Saint Anthony was renowned for his zealous preaching of the True Faith against heretics.)   In this prayer, we recognise that our greatest need is for grace—the life of God in our souls—which saves us from sin.  Our particular need—our request to Saint Anthony—is secondary.

This prayer, however, does not shy away from asking Saint Anthony to intervene in a miraculous fashion to fulfill our particular need.   In return for the good that we desire, we promise to live our lives as Saint Anthony did—conforming our actions to the truths taught to us by the Church, living and preaching the Gospel and serving the poor.

The Holy Spirit
Only one thing is important: eternal salvation. Only one thing, therefore, is to be feared: sin. Sin is the result of ignorance, weakness and indifference. The Holy Spirit is the Spirit of Light, of Strength and of Love. With His sevenfold gifts He enlightens the mind, strengthens the will and inflames the heart with the love of God. To ensure our salvation we ought to invoke the Divine Spirit daily, because the Spirit comes to us in our needs. When we don’t know what to say, it is the Spirit who speaks within us.

Prayer
Come and fill me, O Divine Spirit.   Fill my heart with your heavenly fruits:  Your Love for others, Your Joy, Your Peace, Your Kindness, Your Generosity, Your Faithfulness, Your Gentleness and Your temperance for Self-Control, that I may never weary in the service of God.   Keep me close to You so that my life produces Your fruits in ever-increasing abundance.   Help me to continually and faithfully submit to Your divine inspiration so that I will be united eternally with You in the love of the Father and the Son. Amen.

Our Father, Hail Mary, Glory be to the Father

Prayer for the Seven Gifts of the Holy Spirit.

Prayer to the Holy Spirit.

“Jesus was born in cave in Bethlehem because, Sacred Scripture tells us,
“there was no room for them in the inn.”
I am not departing from theological truth when I say that
Jesus is still looking for shelter in your heart.” 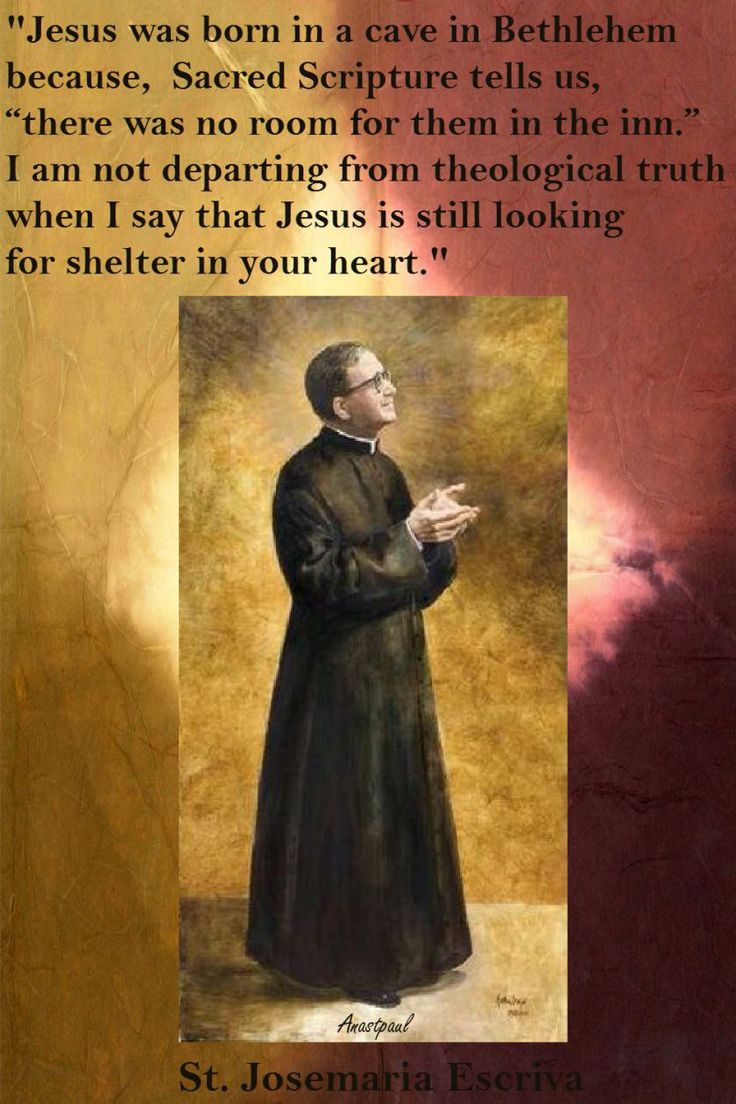 Thought for the Day – 3 June

Such courage! These young men went courageously to their deaths, filled with the gifts of the Holy Spirit, so happy in their newfound faith, something completely baffling to the African chief.   To St Charles Lwanga and his companions, their faith was the greatest treasure and they were willing and happy to die for it.  Would that we too, graced by this great gift of faith, though we may never be called upon to die for it, it should be luminously clear to all that we are witnesses to Christ.

St Charles Lwanga and companions, Martyrs of Uganda, Pray for us!

If you are reviled for the name of Christ,
you are blessed, because the Spirit of glory
and of God rests upon you……1 Peter 4:14

REFLECTION – “The African martyrs add another page to the Church’s roll of honour – an occasion both of mourning and of joy. These African martyrs herald the dawn of a new age. If only the mind of man might be directed not toward persecutions and religious conflicts but toward a rebirth of Christianity and civilization! Africa has been washed by the blood of these latest martyrs and first of this new age (and, God willing, let them be the last, although such a holocaust is precious indeed). Africa is reborn free and independent. – Blessed Pope Paul VI from the homily at the canonisation of Saint Charles Lwanga and companions.

PRAYER – Heavenly Father, give us the strength and the courage and fill us with Your Holy Spirit that we may always be faithful to Your Son and His way of the Cross. Blessed and holy Martyrs of Uganda, you St Charles Lwanga and your young companions, are a light to us all! Please pray for us, amen.

Come, most gracious Spirit, come!
Come, Mercy beyond all words
and Grace beyond all comparing.
Come, everlasting Fire, Dove unchangeable.
come down, in pity and never leave us,
inbreathe, inpour Yourself to fill and enliven
us with Your Spirit.
You are our union, You are our Uniter.
Let Your fire join and keep us joined.
Feed Your new chicks, most holy Dive
and lead them forth.
Lead them through to the eternal nest,
where with God the Father
and the Son You abide for all eternity. Amen 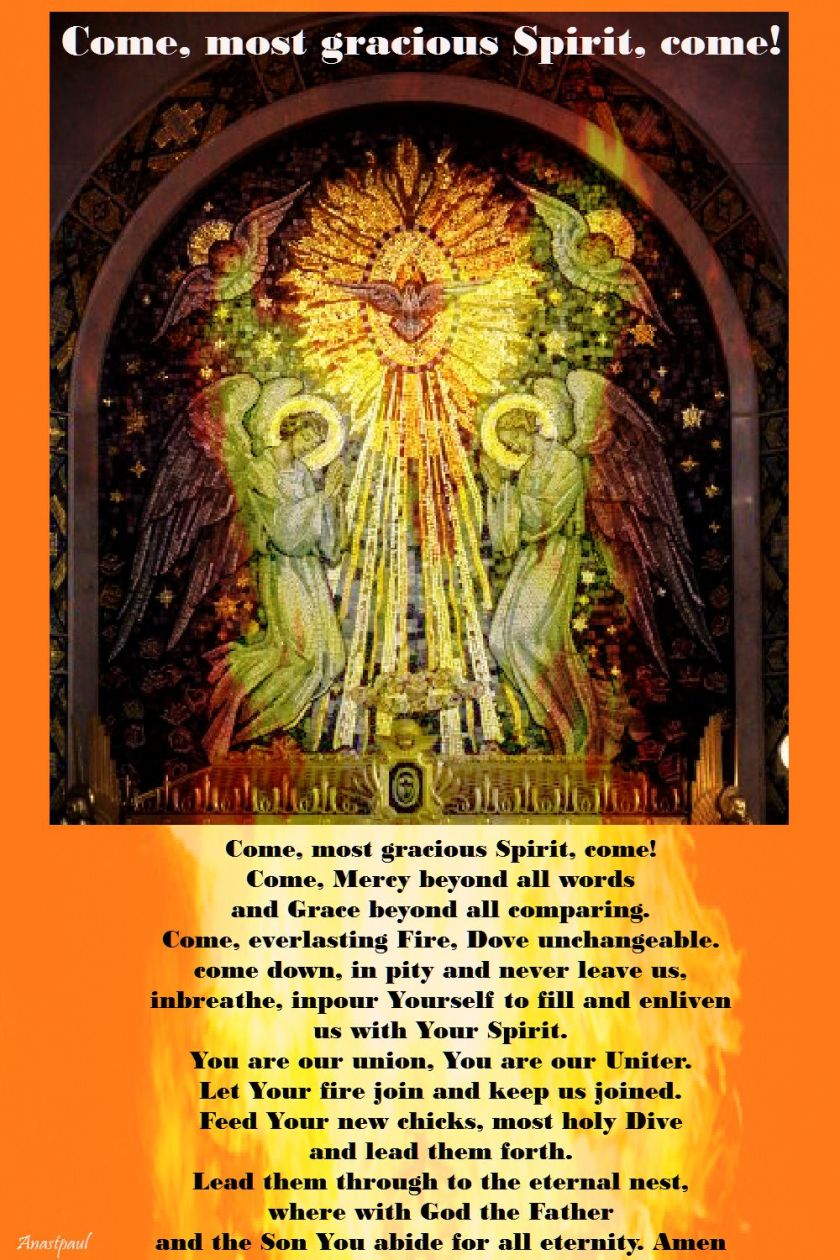 All martyrs’ stories are inspiring, but the martyrdom of young people really makes us think.

By 1879 the first Catholic missions were started in Uganda and other parts of Central Africa.   Under King Mtesa missionaries preached, people studied the faith and many believed in Jesus.   Unfortunately King Mtesa was succeeded by King Mwanga, who began persecuting the Christians in Uganda.

Charles Lwanga was a young man, probably in his late teens, who was a page in the court of King Mwanga.   After Mkasa, the Christian master of the court pages, criticised the king for his immoral acts and for murdering a group of missionaries, the king had him beheaded.   On the same night Mkasa was martyred, Charles, a catechumen, was baptised.   Charles replaced Mkasa as head of the pages and continued to encourage the young men to refuse to take part in the pagan customs of the country.   Later a young page refused to become involved in the king’s immoral acts and confessed that a page named Denis was instructing him to be a Christian.   This angered the king so much that he sent for Denis and thrust a spear through his throat.   Then Mwanga summoned all the pages and separated the Christian pages from the rest.   He commanded his soldiers to kill Charles Lwanga and his friends.   Most of the pages were under the age of twenty-five.   The youngest was thirteen years old.

In prison Charles inspired the others to be courageous and faithful.   The boys were executed thirty-seven miles away.   Three were killed on the road.   Charles was burned alive.   The others met the same fate or were beheaded. They prayed and sang enthusiastically at their deaths.

After their deaths, many other Christians were persecuted and killed. The example of these teenagers and men inspired other people, and in Africa the faith grew and spread. It has refused to die.

Uganda Martyrs pray for us all, especially for Africa! 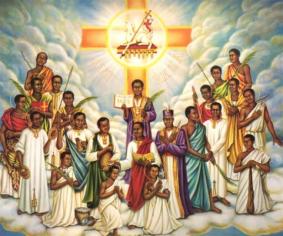 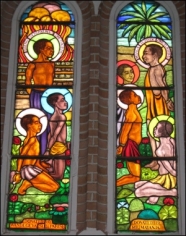 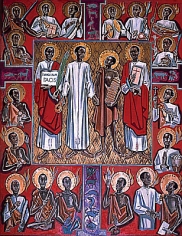 Martyrs of Africa – 156 saints: 156 Christians martyred together in Africa, date unknown; the only other information to survive are some of their names –
• Abidianus
• Demetria
• Donatus
• Gagus
• Januaria
• Juliana
• Nepor
• Papocinicus
• Quirinus
• Quirus
Martyrs of Byzantium – 5 saints: A group of Christians, possibly related by marriage, who were martyred together. They were –
• Claudius
• Dionysius
• Hypatius
• Lucillian
• Paul
They were martyred in 273 in Byzantium.

Martyrs of Rome – 8 saints: A group of Christians martyred together. We know nothing else about them but the names –
• Amasius
• Emerita
• Erasmus
• Lucianus
• Orasus
• Satuaucnus
• Septiminus
• Servulus
They were martyred in Rome, Italy, date unknown.