Saint of the Day – 10 October – St Francis Borgia S.J. (1510-1572) Priest, Advisor, Missionary, Evangelist, Administrator par excelleance.   Born – Francisco de Borja y Aragon was the 4th Duke of Gandía, was a Grandee of Spain, a Spanish Jesuit and third Superior General of the Society of Jesus –  (28 October 1510 at Gandia, Valencia, Spain – 30 September 1572 at Ferrara, Italy).   His relics were translated to the Jesuit church in Madrid, Spain in 1901.  He was Beatified on 23 November 1624 at Madrid by Pope Urban VIII and Canonised on 20 June 1670 by Pope Clement X in Rome, Italy.  Patronages – against earthquakes, Portugal, Rota, Marianas.   Attributes – Skull crowned with an emperor’s diadem. 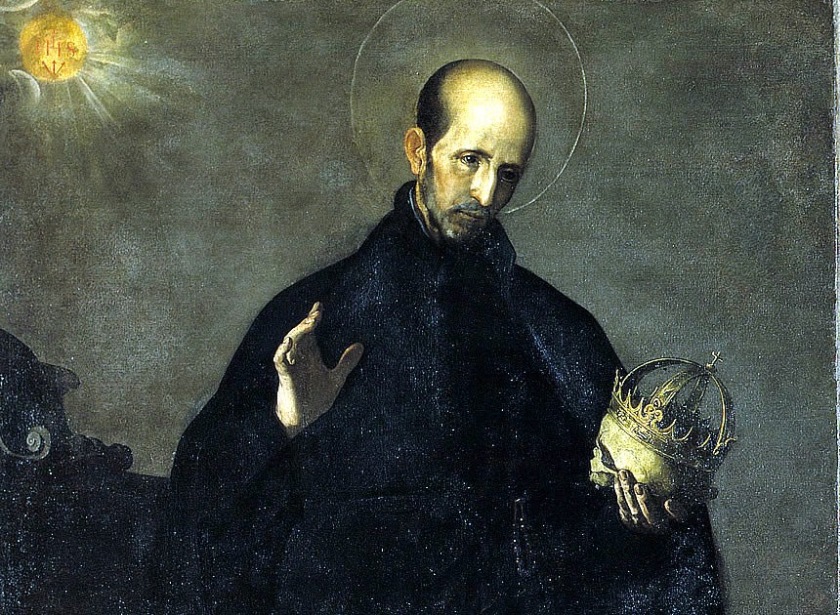 St Francis was born in Duchy of Gandía, Valencia, on 28 October 1510.   His father was Juan Borgia, 3rd Duke of Gandía, the son of Giovanni Borgia, the son of Pope Alexander VI (Rodrigo Borgia).   His mother was Juana, daughter of Alonso de Aragón, Archbishop of Zaragoza, who, in turn, was the illegitimate son of King Ferdinand II of Aragon.   His brother, Tomás de Borja y Castro, also became a clergyman, becoming the Bishop of Málaga and later the Archbishop of Zaragoza.

As a relative of Pope Alexander VI, King Ferdinand of Aragon and Emperor Charles V, joined Spain’s imperial court at age eighteen,  although as a child he was very pious and wished to become a monk, his family sent him instead to court.  He distinguished himself there, accompanying the Emperor on several campaigns.  The next year he married Eleanor de Castro, who bore him eight children.   In 1539, shortly after experiencing a religious conversion, Francis left the court but continued in public life as viceroy of Catalonia.   At this time under the influence of St Peter of Alcántara O.F.M. and St Peter Favre S.J, he progressed in prayer and the spiritual life.

In 1543, Francis succeeded his father as duke of Gandia.   He was much opposed to gaming and did not allow his servants to indulge in it.   He used to say: “Gaming is accompanied by great losses; loss of money, loss of time, loss of devotion and loss of conscience.”   The same aversion he had for the reading of frivolous books, even if they were not immoral.   He found his greatest delight in reading devout books and said:  “The reading of devout books is the first step towards a better life.”   At the period in which he lived the principal enjoyments of the higher classes were music and hawking;  and, as he could not abstain from them entirely, he took care, at such times, to raise his thoughts to the Almighty and to mortify himself.   Thus, when he went hawking, he closed his eyes at the very moment when the hawk swooped; the sight of which, they say, was the chief pleasure of this kind of hunting.

The Almighty, to draw His servant entirely away from the world, sent him several severe maladies, which made him recognise the instability of all that is earthly.   He became more fully aware of this after the death of the Empress, whose wondrous beauty was everywhere extolled.   By the order of the Emperor, it became the duty of Francis to escort the remains to the royal vault at Granada.   There the coffin was opened before the burial took place, and the sight that greeted the beholders was most awful.   Nothing was left of the beautiful Empress but a corpse, so disfigured, that all averted their eyes, whilst the odour it exhaled was so offensive that most of the spectators were driven away.

St Francis was most deeply touched, and when, after the burial, he went into his room, prostrated himself before the crucifix and having given vent to his feelings, he exclaimed: “No, no, my God! in future I will have no master whom death can take from me.”   He then made a vow that he would enter a religious order, should he survive his consort.   He often used to say afterwards:  “The death of the Empress awakened me to life.”   When Francis returned from Granada the Emperor created him Viceroy of Catalonia and in this new dignity the holy Duke continued to lead rather a religious than a worldly life.   He had a fatherly care for his subjects and every one had at all hours admittance to him.   Towards the poor he manifested great kindness.   He daily gave four or five hours to prayer.   He fasted almost daily and scourged himself to blood.   He assisted at Mass and received Holy Communion every day.   When he heard that disputes had arisen among the theologians at the universities, in regard to the frequent use of Holy Communion, he wrote to St. Ignatius, at Rome and asked his opinion on the subject. St. Ignatius wrote back to him, approving of the frequent use of Holy Communion and strengthening him in his thoughts about it.

Meanwhile, the death of his father brought upon him the administration of his vast estates, without, however, in the least changing his pious manner of living.   Soon after his pious consort, who was his equal in virtue, became sick.   Francis prayed most fervently to God for her recovery.   One day, while he was thus praying, he heard an interior voice, which said these words: “If thou desirest that thy consort should recover, thy wish shall be fulfilled but it will not benefit thee.”   Frightened at these words, he immediately conformed his own will in all things to the Divine will.   From that moment the condition of the Duchess grew worse and she died, as she had lived, piously and peacefully.   St Francis, remembering his vow, determined to execute it without delay. Taking counsel of God and of his confessor, he chose the Society of Jesus, which had recently been instituted.   Writing to St. Ignatius, he asked for admittance, which was cheerfully granted.   But, to settle his affairs satisfactorily, he was obliged to remain four years longer in his offices.  Having at length, by the permission of the Emperor, resigned his possessions to his eldest son, he took the religious habit and proceeded to Rome. Scarcely four months had elapsed since his arrival, when he was informed that the Pope wished to make him a cardinal;  and, to avoid this dignity, he returned to Spain.   Being ordained priest, he said his first Mass in the chapel of the Castle of Loyola, where St Ignatius had been born;  and then spent a few years in preaching and instructing the people.   It would take more space than is allowed to us to relate how many sinners he converted, and how much he laboured for the honour of God and the salvation of souls.

While he preferred a quiet life of solitude, the Jesuits felt differently and promoted him so that he could use his great administrative talents for the church.   In 1554, St Ignatius appointed Francis commissary for Spain, where he founded twelve colleges and a novitiate.   The Jesuits chose Francis as their general in 1565.   His consolidation of the society and expansion of its ministry has caused him to be recognised as the second founder of the order.   He established disciplined novitiates in every Jesuit province, writing regulations and books of spiritual instruction for them. 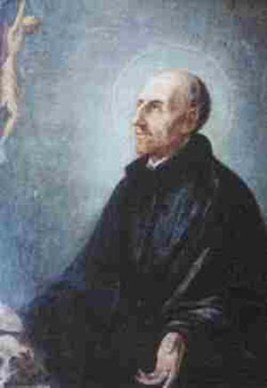 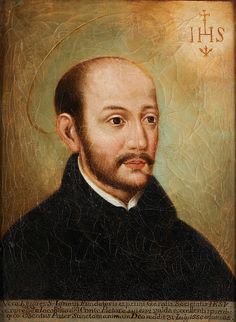 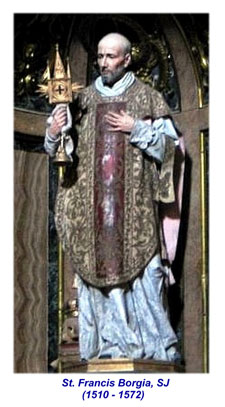 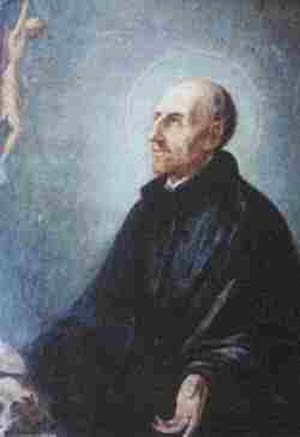 Francis created a new Jesuit base in Poland and strengthened the community’s work in Germany and France.   Between 1566 and 1572 he launched the Jesuit mission to Spanish colonies in Florida, Mexico and Peru.   He maintained contact with the missioners by letter, advising them about their own spiritual lives and counseling them on strategy. Following is an excerpt from his correspondence:

“We must perform all our works in God and refer them to His glory so that they will be permanent and stable.   Everyone—whether kings, nobles, tradesmen or peasants—must do all things for the glory of God and under the inspiration of Christ’s example. . . . When you pray, hear Mass, sit at table, engage in business and when at bedtime you remove your clothes—at all times crave that by the pain which He felt when He was stripped just before His crucifixion, He may strip us of our evil habits of mind.   Thus, naked of earthly things, we may also embrace the cross.

Wherever our brethren may be, let their first care be for those already converted.   Their first aim must be to strengthen these in the faith and to help them save their souls.   After this they may convert others not yet baptised.   But let them proceed prudently and not undertake more than they can carry through.   It is not desirable for them to hurry here and there to convert heathen with whom they cannot afterwards keep in touch.   It is better to advance step by step and consolidate conquests already made. . . . They are not to risk their lives unnecessarily in excursions among unconquered people.   The swift loss of life in God’s service may be advantageous for them.   However, it is not for the greater good of the many for there are only a few labourers for the vineyard and it is difficult to replace them.”

His successes during the period 1565-1572 have caused historians to describe Francis as the greatest General after Saint Ignatius.   He founded the Collegium Romanum, which was to become the Gregorian University in Rome, advised kings and popes and closely supervised all the affairs of the rapidly expanding order.   Yet, despite the great power of his office, Francis led a humble life and was widely regarded in his own lifetime as a saint.

In 1571 the pope sent Francis to Spain and Portugal to help build an alliance against the Turks.   He grew increasingly ill on this ambassadorial trip and died after returning to Rome in 1572. 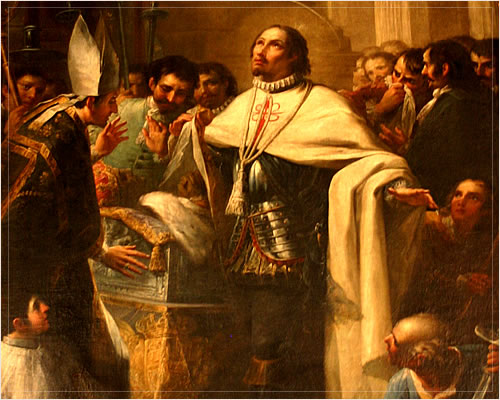 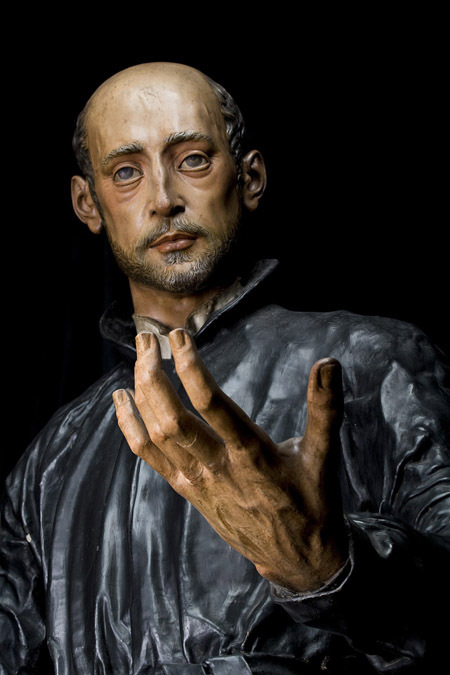