The history of the papacy and the Church is inextricably mixed with the personal biography of Damasus.   In a troubled and pivotal period of Church history, he stands forth as a zealous defender of the faith who knew when to be progressive and when to entrench.

And it is to him that we owe our gratitude for the translation of the Scriptures, which influenced so mightily the next 1700 years and still do.   Through St Jerome, he provided THE genuine treasure for the Church.

Damasus makes us aware of two qualities of good leadership:  alertness to the promptings of the Spirit and service.   His struggles are a reminder that Jesus never promised His Rock protection from hurricane winds nor His followers immunity from difficulties.   His only guarantee is final victory.   (Partially thanks to Fr Don Miller OFM)

St Pope Damasus I, pray for us!

from the Decree of Damasus (attributed to St Pope Damasus I) 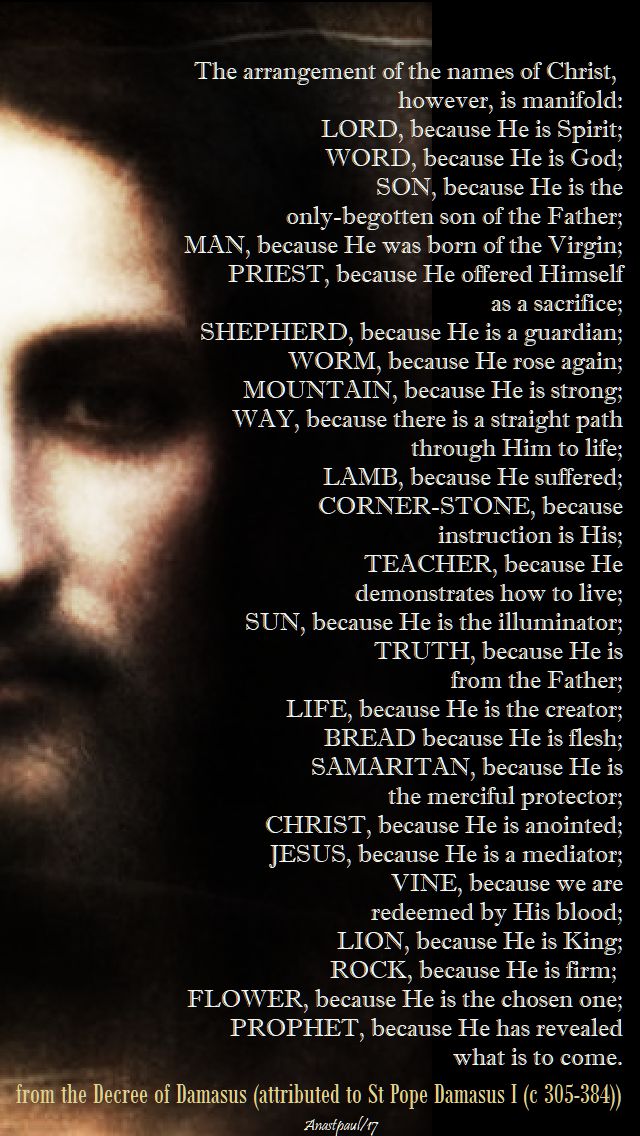 Now faith is confidence in what we hope for and assurance about what we do not see…Hebrews 11:1 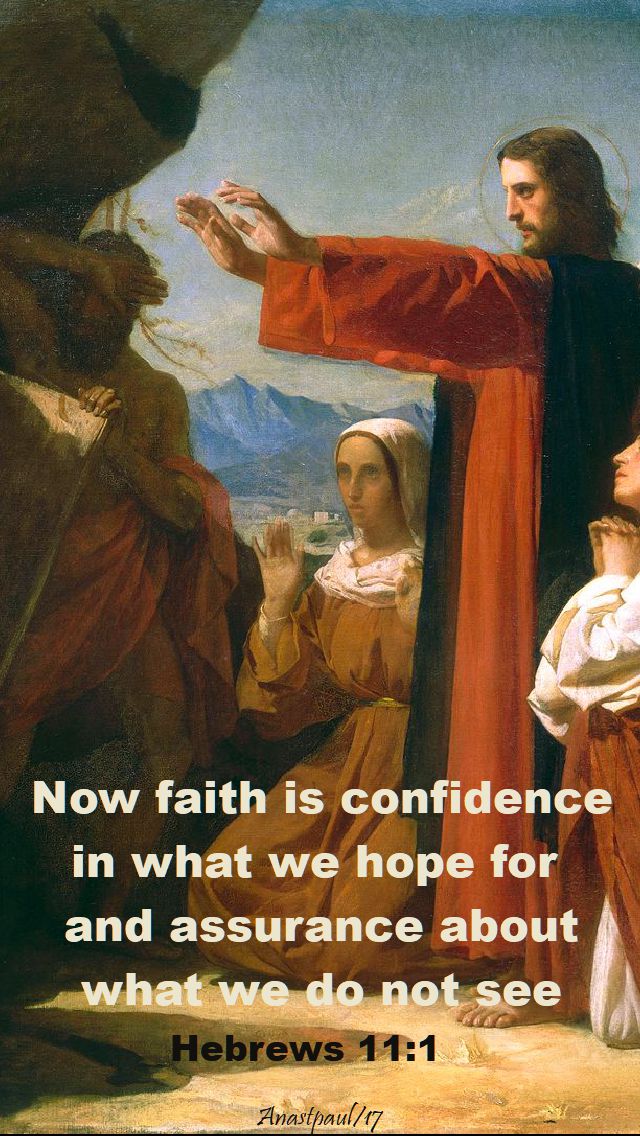 REFLECTION – “He who walking on the sea could calm the bitter waves, who gives life to the dying seeds of the earth;  He who was able to loose the mortal chains of death and after three days’ darkness could bring again to the upper world the brother for sister Martha:  He, I believe, will make Damasus rise again from the dust.”……………St Pope Damasus I

PRAYER – Jesus, my Lord and my God, grant us the grace of faith to believe that all that You have said will be fulfilled.   And fill us with Your Holy Spirit of love so that we may translate that belief into practice, by obeying Your commands every day.   St Pope Damasus, you proved your love for Christ and His Church, please pray that we may always be faithful and filled with a like zeal for the Church and Bride of Christ, amen. 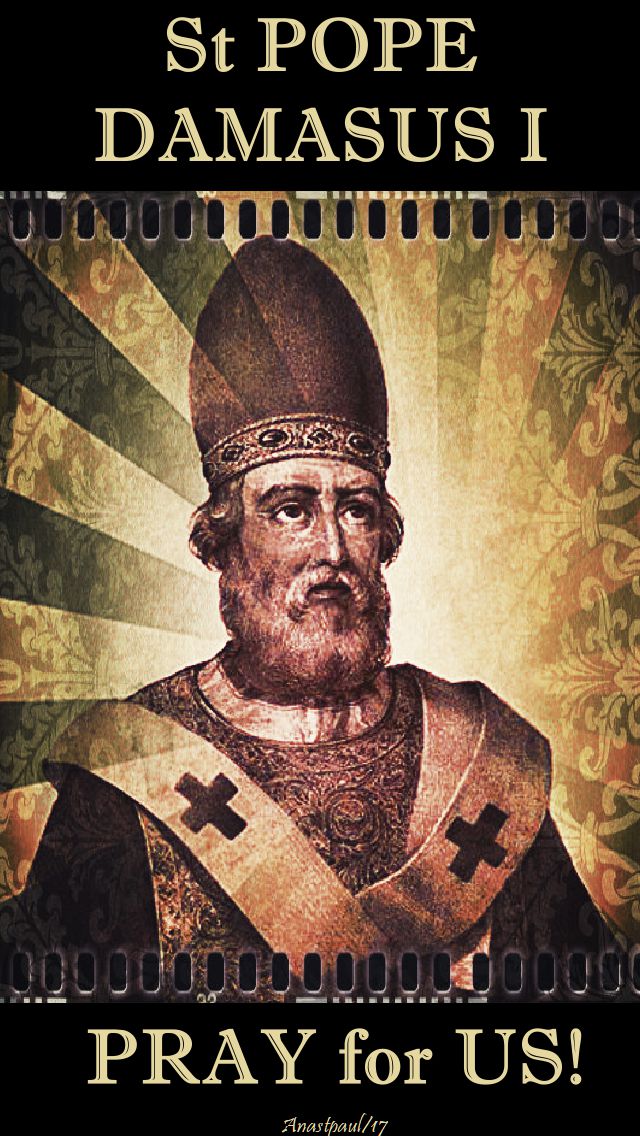 Come, Sun and Saviour,
to embrace Our gloomy world,
its weary race,
As groom to bride, as bride to groom:
The wedding chamber, Mary’s womb.
At your great Name, O Jesus, now
All knees must bend, all hearts must bow;
All things on earth with one accord,
Like those in heaven, shall call you Lord.
Come in Your holy might, we pray,
Redeem us for eternal day;
Defend us while we dwell below,
From all assaults of our dread foe.

Monday of the Second Week of Advent – 11 December

Daily Meditation:
Our God will come to save us!
What an incredible promise!
Each of these days uses images to help us
to imagine and become excited about the ways
our God has tried to prepare us, through the prophets
to be ready for the healing and restoration and love
that is offered us in Jesus.
For all in me that is feeble or weak or frightened
I can simply listen to these words:

Strengthen the hands that are feeble,
make firm the knees that are weak,
Say to those whose hearts are frightened:
Be strong, fear not!
Here is your God,
he comes with vindication;
With divine recompense
he comes to save you…Isaiah 35:3-4

Today’s Daily Reflection – Intercessions:
To Christ our Redeemer, who will come again to free from
the power of death all those who return to Him, let
us humbly pray:
Come, Lord Jesus!

As we proclaim Your coming, Lord,
– cleanse our hearts of every vain desire.

Lord, may the Church which You founded,
– proclaim Your greatness to all peoples.

Your law is a light to our eyes,
– let it protect those who trust in you.

You allow the joys of Your coming to be foretold to us by
Your Church,
– may we receive You with eager devotion.

Closing Prayer:
God of Strength,
I need Your courage.
You offer to make firm the knees that are weak.
Only You know how frightened I so often am.
And You do offer me strength.
There is the promise of Your Son’s coming
and knowing that You will save me.
I can’t do this on my own
no matter how often I think I can.
Give me the humility to ask for Your help
and open heart to accept
Your healing and love in my life.
May the Lord bless us,
protect us from all evil
and bring us to everlasting life.
Amen.

The son of a Roman priest, possibly of Spanish extraction, Damasus started as a deacon in his father’s church and served as a priest in what later became the basilica of San Lorenzo in Rome.    He served Pope Liberius (352-366) and followed him into exile.

When Liberius died, Damasus was elected bishop of Rome; but a minority elected and consecrated another deacon, Ursinus, as pope.   The controversy between Damasus and the antipope resulted in violent battles in two basilicas, scandalising the bishops of Italy. At the synod that Damasus called on the occasion of his birthday, he asked them to approve his actions.   The bishops’ reply was curt:  “We assembled for a birthday, not to condemn a man unheard.”   Supporters of the antipope even managed to get Damasus accused of a grave crime—probably sexual—as late as 378.   He had to clear himself before both a civil court and a Church synod.

As pope, his lifestyle was simple in contrast to other ecclesiastics of Rome and he was fierce in his denunciation of Arianism and other heresies.   A misunderstanding of the Trinitarian terminology used by Rome threatened amicable relations with the Eastern Church and Damasus was only moderately successful in dealing with that challenge.

He appointed St Jerome as his confidential secretary.   Invited to Rome originally to a synod of 382 convened to end the schism of Antioch, Jerome made himself indispensable to the pope and took a prominent place in his councils.   Jerome spent three years (382–385) in Rome in close intercourse with Pope Damasus and the leading Christians.   Writing in 409, Jerome remarked, “A great many years ago when I was helping Damasus, bishop of Rome with his ecclesiastical correspondence, I was also helping to write his answers to the questions referred to him by the councils of the east and west…”

In order to put an end to the marked divergences in the western texts of that period, Damasus encouraged the highly respected scholar Jerome to revise the available Old Latin versions of the Bible into a more accurate Latin on the basis of the Greek New Testament and the Septuagint, resulting in the Vulgate.   Jerome devoted a very brief notice to Damasus in his De Viris Illustribus, written after Damasus’ death:  “he had a fine talent for making verses and published many brief works in heroic metre. He died in the reign of the emperor Theodosius at the age of almost eighty”.

The letters from Jerome to Damasus are examples of the primacy of the See of Peter:

Yet, though your greatness terrifies me, your kindness attracts me.   From the priest I demand the safe-keeping of the victim, from the shepherd the protection due to the sheep.   Away with all that is overweening;  let the state of Roman majesty withdraw.   My words are spoken to the successor of the fisherman, to the disciple of the cross.   As I follow no leader save Christ, so I communicate with none but your blessedness, that is with the chair of Peter.   For this, I know, is the rock on which the church is built!   This is the house where alone the paschal lamb can be rightly eaten.   This is the ark of Noah and he who is not found in it shall perish when the flood prevails.   But since by reason of my sins I have betaken myself to this desert which lies between Syria and the uncivilised waste, I cannot, owing to the great distance between us, always ask of your sanctity the holy thing of the Lord.   Consequently I here follow the Egyptian confessors who share your faith and anchor my frail craft under the shadow of their great argosies. I know nothing of Vitalis;  I reject Meletius;  I have nothing to do with Paulinus.   He that gathers not with you scatters;  he that is not of Christ is of Antichrist!”

During his pontificate, Christianity was declared the official religion of the Roman state, and Latin became the principal liturgical language as part of the Pope’s reforms.   His encouragement of Saint Jerome’s biblical studies led to the Vulgate, the Latin translation of Scripture which 12 centuries later the Council of Trent declared to be “authentic in public readings, disputations, preaching.”

Martyrs of Rome – (3 saints): Three Christians murdered in the persecutions of Diocletian for giving aid to Christian prisoners – Pontian, Practextatus and Trason. They were imperial Roman citizens. They c 303 in Rome, Italy.