Today the Church remembers the witness of Saint Stephen, the first of the Church’s martyrs. The cruelty of his death is recorded in the Acts of the Apostles, as is the manner in which he died, transforming the violence that took his life into an occasion to give witness to an authority greater than those fallen powers who would rule us by fear and threats.

That the Church remembers Saint Stephen today is no accident.  Strip away the sentimentality that obscures the story of Christ’s Nativity and one realises that Christ came into this world and from the first instant He showed His infant face, He was opposed.   Recall yesterday’s excerpt from the magnificent prologue to the Gospel of John which testifies that Christ came to His own (us) and His own (again, that means us) “knew him not.”   But worse than this- we refused Him.

And many still do.

The Holy Child came ready for this fight and the world was willing to fight Him. However, the world discovered that it was outmatched and the fallen powers of this world turned against those whom the Holy Child loves.   Unable to harm the Body of His human nature any longer, the world strikes at His Body, the Church.

Therefore, when the Church remembers its martyrs, like Saint Stephen, it is not merely out of a concern that the faithful become conversant in the details of Church history. Instead it is to keep us honest- not only about the past but also about the present.   It has never been easy to be a Christian and being a Christian has always been counter-cultural.   If lived authentically, it is lived in defiance against the fallen powers of the world.

This means that like our Saviour we have to be ready.   We have to learn the strategy that He used to defeat the fallen powers of this world and how He claimed victory when it seemed that these fallen powers could not be defeated.   We must learn His strategy- enacted in the witness of Saint Stephen and all the Church’s martyrs, past and present- lest in our opposition to the powers of this world, we become just like them.  (Fr Steve Grunow)

Grant, Lord we pray,
that we may imitate what we worship,
and so learn to love even our enemies,
for we celebrate the heavenly birthday
of Saint Stephen, who knew how to pray for his persecutors.
Through our Lord Jesus Christ your Son,
who lives and reigns with you in the unity of the Holy Spirit,
one God, for ever and ever.
Amen.

St Stephen, pray for us! 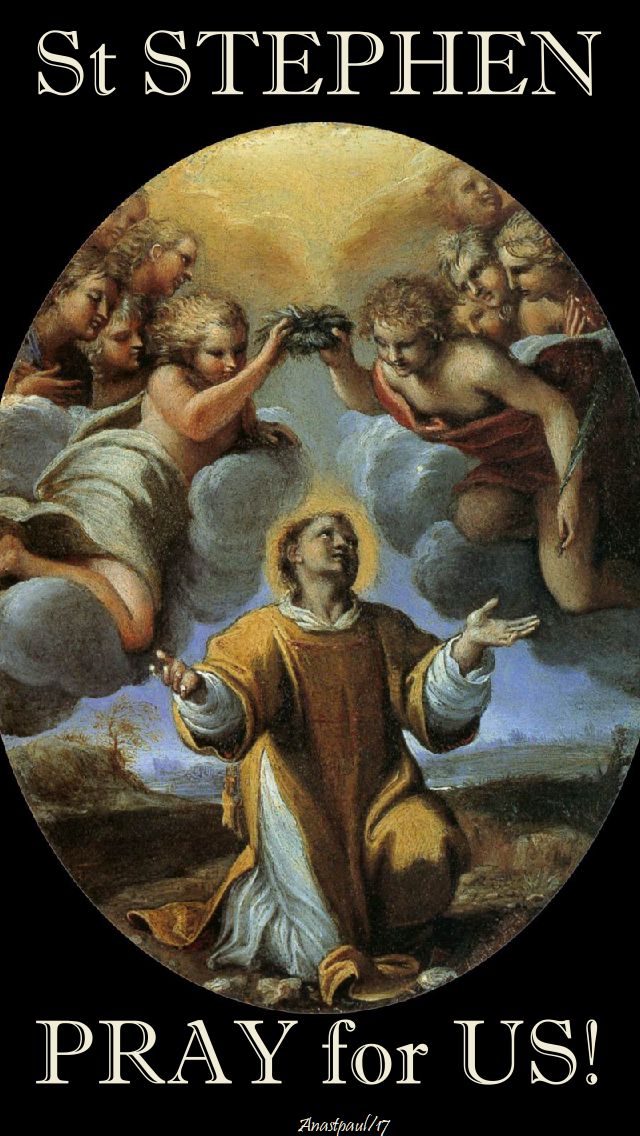 “The deep bond which links Christ
to His first martyr Stephen, is divine Charity –
the very Love which impelled the Son of God
to empty Himself and make Himself obedient
unto death on a Cross …It is always necessary
to notice this distinctive feature of Christian martyrdom,
it is exclusively an act of love for God and for man,
including persecutors.”

” …Like his Master, St Stephen died forgiving his persecutors
and thus makes us realise that the entry into the world
of the Son of God gives rise to a new civilisation,
the civilisation of love that does not yield to evil
and violence and pulls down the barriers
between men and women, making them brothers and sisters
in the great family of God’s children.”

“When they hand you over, do not worry about how you are to speak or what you are to say;   for what you to say will be given to you in that hour;   for it not you who speak, but the Spirit of your father speaking through you.” …Matthew 10:19-20

REFLECTION – “Yesterday, we celebrated, the birth in time of our eternal King.   Today, we celebrate the triumphant suffering, of his soldier.   Yesterday our king, clothed in His robe of flesh, left  His place in the virgin’s womb and graciously visited the world.   Today His soldier, leaves the tabernacle of his body and goes triumphantly to heaven.”…from a sermon by Saint Fulgentius of Ruspe (460-533)

PRAYER – O God, the teacher and ruler of all that minister unto Thee, who did adorn the first beginnings of thy Church both with the ministrations of Thy blessed Deacon Stephen and with the precious blood of his martyrdom:   grant, we beseech Thee, that we, in the hour of our departure, obtaining Thy pardon, may be followers of his example and assisted by his prayers. Amen. – Milanese Sacramentary 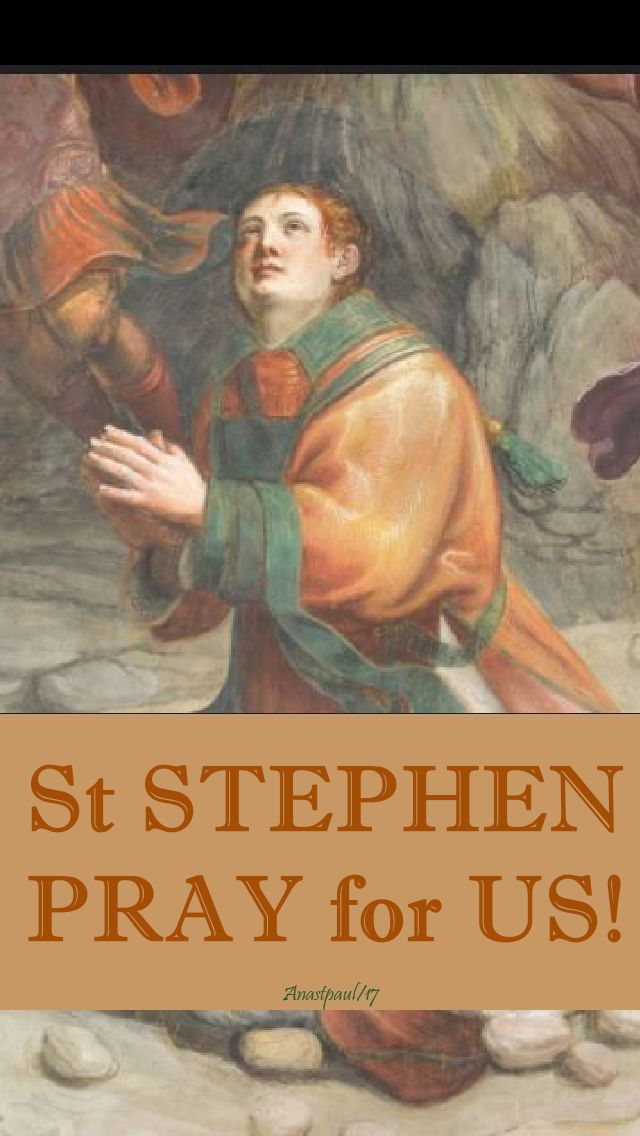 One of great honour
Our Creator, our King
An underserved sinner
With nothing to bring

Poem/Prayer by Daryl Madden
From On a Bench of Wood
Find him here: https://darylmadden.wordpress.com/about/ 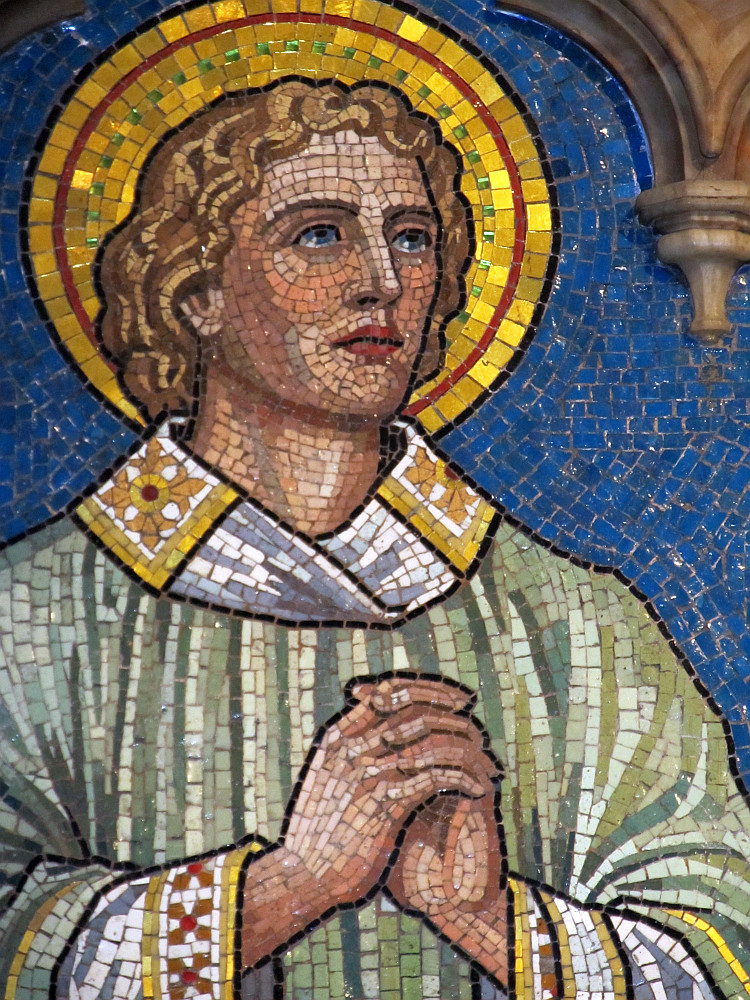 St Stephen was according to the Acts of the Apostles a deacon in the early church at Jerusalem who aroused the enmity of members of various synagogues by his teachings. Accused of blasphemy, at his trial he made a long speech denouncing the Jewish authorities who were sitting in judgement against him and was then stoned to death.   His martyrdom was witnessed by Saul of Tarsus, a Pharisee who would later himself become a follower of Jesus and known as Paul the Apostle.

The only primary source for information about Stephen is the New Testament book of the Acts of the Apostles.   Stephen is mentioned in Acts 6 as one of the Greek-speaking Hellenistic Jews selected to participate as a deacon in the early Church by the eleven – before the twelfth was elected.

“Good King Wenceslaus went out, on the Feast of Stephen”.   This is the Feast of St Stephen, the day after Christmas, when we commemorate the first disciple to die for Jesus.

In the Acts of the Apostles, St Luke praises St Stephen as “a man full of faith and the Holy Spirit,” who “did great wonders and signs among the people” during the earliest days of the Church.   Luke’s history of the period also includes the moving scene of Stephen’s death – witnessed by St Paul before his conversion – at the hands of those who refused to accept Jesus as the Jewish Messiah.   Stephen himself was a Jew who most likely came to believe in Jesus during the Lord’s ministry on earth.   He may have been among the 70 disciples whom Christ sent out as missionaries, who preached the coming of God’s kingdom while travelling with almost no possessions.   This spirit of detachment from material things continued in the early Church, in which St Luke says believers “had all things in common” and “would sell their possessions and goods and distribute the proceeds to all, as any had need.”   But such radical charity ran up against the cultural conflict between Jews and Gentiles, when a group of Greek widows felt neglected in their needs as compared to those of a Jewish background.

Stephen’s reputation for holiness led the Apostles to choose him, along with six other men, to assist them in an official and unique way as this dispute arose.   Through the sacramental power given to them by Christ, the Apostles ordained the seven men as deacons and set them to work helping the widows.

As a deacon, Stephen also preached about Christ as the fulfillment of the Old Testament law and prophets.   Unable to refute his message, some members of local synagogues brought him before their religious authorities, charging him with seeking to destroy their traditions.   Stephen responded with a discourse recorded in the seventh chapter of the Acts of the Apostles.   He described Israel’s resistance to God’s grace in the past and accused the present religious authorities of “opposing the Holy Spirit” and rejecting the Messiah.

Before he was put to death, Stephen had a vision of Christ in glory. “Look,” he told the court, “I see the heavens opened and the Son of Man standing at the right hand of God!”

The council, however, dragged the deacon away and stoned him to death.   “While they were stoning Stephen, he prayed, ‘Lord Jesus, receive my spirit,’ records St. Luke in Acts 7.   “Then he knelt down and cried out in a loud voice, ‘Lord, do not hold this sin against them.’   When he had said this, he fell asleep.”