26 December – The Second Day of the Christmas Octave

Jesus is born an infant

“Consider the first sign which the angel gave to the shepherds as they discovered the newborn Messiah, was that they would find Him as an infant.   The littleness of infants causes us to respond in love but consider that the infant Jesus, who is also the incomprehensible God, has made Himself an infant for our sake.   Adam came into the world as a fully-developed man, the eternal Word chose to appear to us as an infant, so that He might attract our hearts to Himself with great force.   He did not come into the world for any other reason, other than, to be loved!

My beloved Jesus, my dearest infant, enchain me with Your love.   I love You and will always love You.   Permit me never to be separated from You.”

And they went with haste and found Mary and Joseph and the babe lying in a manger.

Glory to God, the angels cry
Earth hears the echo from on high.
Mankind’s true Shepherd and its Lord,
by shepherd hearts is first adored.
Almighty God,
Your incarnate Word fills us
with the new light He brought to men.
Let the light of faith in our hearts
shine through all that we do and say.
Amen 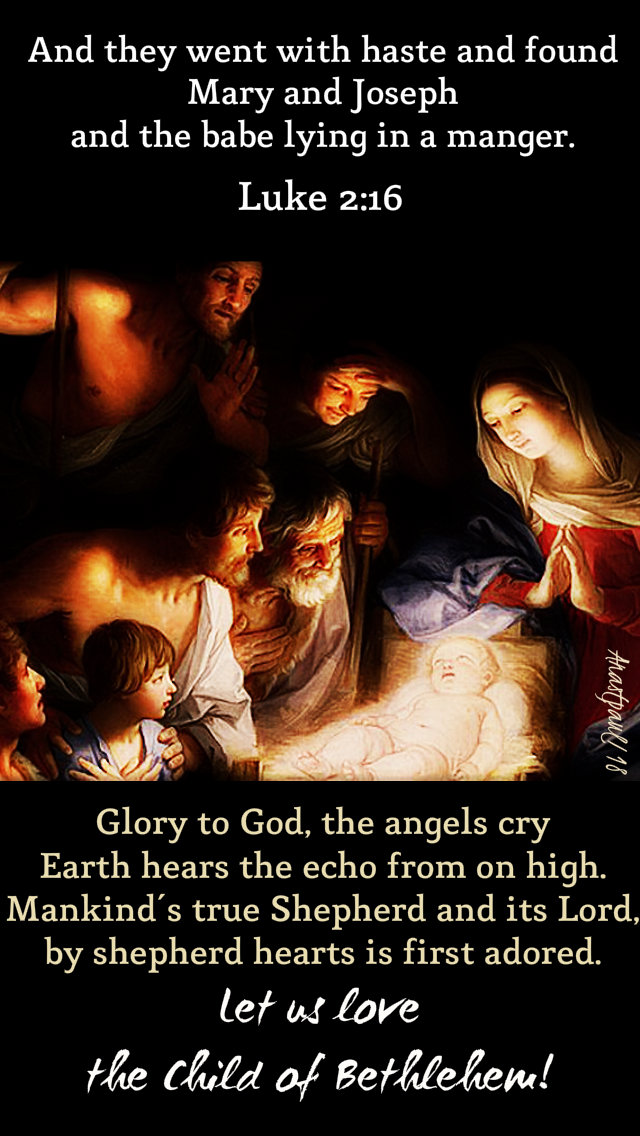 The Apostles chose Stephen the Deacon, a man full of faith and the Holy Spirit, who was stoned while he prayed, saying “Lord Jesus, receive my spirit and lay not this sin upon them.”

C. By the merits and prayers of blessed Stephen
R. Be merciful, O God, to Your people

Almighty and everlasting God,
who consecrated the first-fruits of Your martyrs
in the blood of blessed Stephen the deacon,
grant, we beg You,
that he may pray for us,
even as he prayed for his persecutors,
to our Lord Jesus Christ Your Son,
who lives and reigns,
world without end.
Amen.

St Stephen the ProtoMartyr (c 05-c 34) (Feast) The Second Day in the Christmas Octave
About: https://anastpaul.wordpress.com/2017/12/26/saint-of-the-day-st-stephen-the-first-martyr-26-december-the-second-day-in-the-octave-of-christmas/

“As the number of disciples continued to grow, the Greek-speaking Christians complained about the Hebrew-speaking Christians, saying that their widows were being neglected in the daily distribution.   So the Twelve called together the community of the disciples and said, ‘It is not right for us to neglect the word of God to serve at table. Brothers, select from among you seven reputable men, filled with the Spirit and wisdom, whom we shall appoint to this task, whereas we shall devote ourselves to prayer and to the ministry of the word.’   The proposal was acceptable to the whole community, so they chose Stephen, a man filled with faith and the Holy Spirit…” (Acts 6:1-5).

Acts of the Apostles says that Stephen was a man filled with grace and power, who worked great wonders among the people.   Certain Jews, members of the Synagogue of Roman Freedmen, debated with Stephen but proved no match for the wisdom and spirit with which he spoke.   They persuaded others to make the charge of blasphemy against him.   He was seized and carried before the Sanhedrin.

In his speech, Stephen recalled God’s guidance through Israel’s history, as well as Israel’s idolatry and disobedience.   He then claimed that his persecutors were showing this same spirit. “…you always oppose the holy Spirit; you are just like your ancestors” (Acts 7:51b). 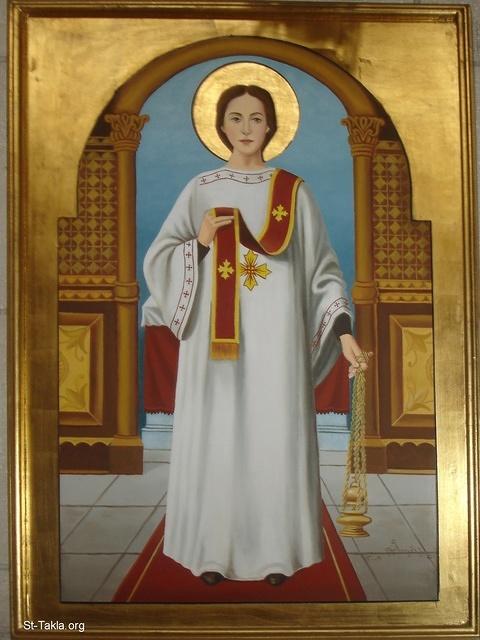 Stephen’s speech brought anger from the crowd.   “But he, filled with the holy Spirit, looked up intently to heaven and saw the glory of God and Jesus standing at the right hand of God, and he said, ‘Behold, I see the heavens opened and the Son of Man standing at the right hand of God.’ …They threw him out of the city and began to stone him. …As they were stoning Stephen, he called out, ‘Lord Jesus, receive my spirit.’ …’Lord, do not hold this sin against them’” (Acts 7:55-56, 58a, 59, 60b).