O Mary, conceived without sin,
I come to your throne of grace
to share the fervent devotion
of your faithful Mexican children
who call to you under the
glorious title of Guadalupe.
Obtain for me a lively faith
to do your Son’s holy will always.
May His will be done on earth
as it is in heaven.

Our Father, Hail Mary, Glory be

and the Prayer for the Protection of all Human Life

Prayer for the Unborn and the Protection of all Human Life

Our Lady of Guadalupe,
we turn to you,
who are the protectress of unborn children
and ask that you intercede for us,
so that we may more firmly resolve to join you
in protecting all human life.
Let our prayers be united
to your perpetual motherly intercession
on behalf of those whose lives are threatened,
be they in the womb of their mother,
on the bed of infirmity,
or in the latter years of their life.
May our prayers
also be coupled with peaceful action
which witnesses to the goodness
and dignity of all human life,
so that our firmness of purpose may give courage
to those who are fearful and bring light
to those who are blinded by sin.
O Virgin Mother of God,
present our petitions to your Son
and ask Him to bless us with abundant life.
Amen 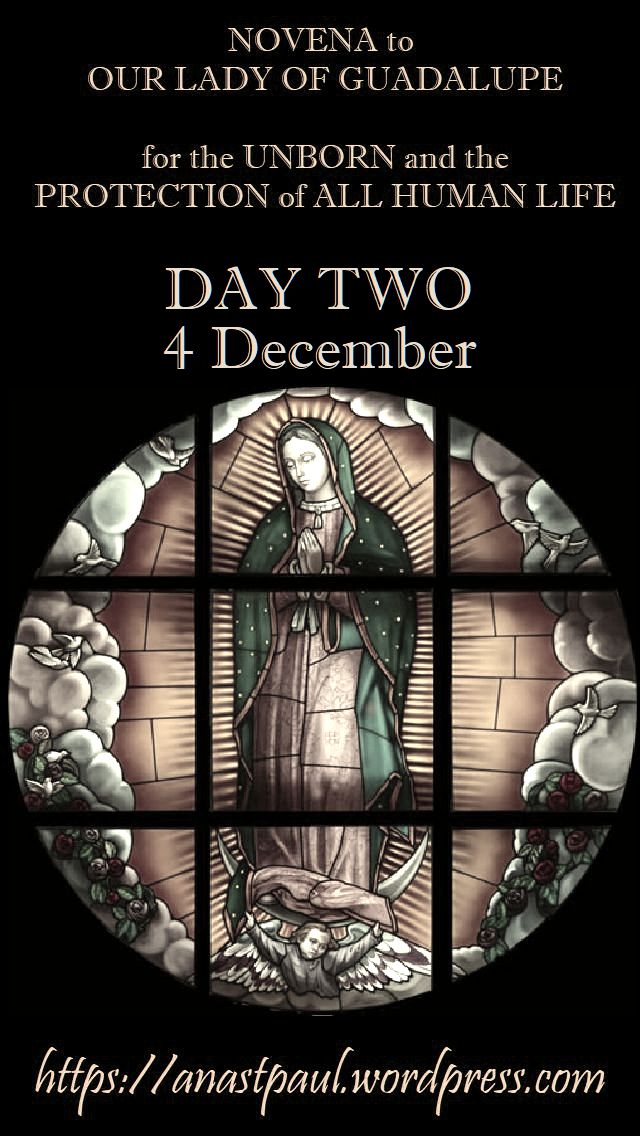 “I am the Mother of fair love and of fear and of knowledge and of holy hope.”   These are he lessons which Mary reminds us of today.   The lesson of fair love, of living a clean life, of having a sensitive and passionate heart, so that we may learn to be faithful in our service to the Church.   This is no ordinary love.   It is Love itself.   There is no room here for betrayal, or calculation, or forgetfulness.   It is a fair, a beautiful love, because its beginning and end is God, who is thrice Holy, who is all Beauty, all Goodness and all Greatness.
But there is also a reference to fear.   For myself, the only fear I can imagine is that of turning away from Love.   God Our Lord, certainly does not want us to be inhibited, timid or lukewarm about our dedication to Him.   He wants us to be daring, courageous and refined.   When the sacred text speaks of fear here I am reminded of a complaint we find elsewhere in Scripture, “I searched for my heart’s love but found him not.”   This can happen, if one has not yet fully understood what it means to love God.   Then our hearts can be swayed by things which do not lead to Our Lord and so we lose sight of Him.   At other times it may be Our Lord who hides Himself. He knows the reason why. In such cases, He will be encouraging us to seek Him more earnestly and, when we find Him, we shall be able to cry out with joy, “I took hold of Him and I will never let Him go.” (Friends of God, 277)

The spotless purity of John’s whole life makes him strong before the Cross.   The other apostles fly from Golgotha:  he, with the Mother of Christ, remains.   Don’t forget that purity strengthens and invigorates the character.  (The Way, 144)

This heart of ours was born to love. But when it is not given something pure, clean and noble to love, it takes revenge and fills itself with squalor.   True love of God and consequently purity of life, is as far removed from sensuality as it is from insensitivity and as far from sentimentality as it is from heartlessness or hard-heartedness.   (Friends of God, 183)

Mary, the holy Mother of our King, the Queen of our heart, looks after us as only she knows how.   Mother of mercy, throne of grace, we ask you to help us compose, verse by verse, the simple poem of charity in our own life and the lives of the people around us;  it is “like a river of peace.”   For you are a sea of inexhaustible mercy: “ All streams run to the sea, but the sea is never full.”  (Christ is Passing By, 187)

At this very moment, you should trustingly beg
Our Lady, as you accompany her in the solitude
of your heart, without saying anything out
loud:

“Mother, this poor heart of mine
rebels so foolishly!
If you don’t protect me…”
Holy Mother, come to my aid,
help me here and now.
Help me always to love with a pure heart,
to love my Lord and my God,
to seek Him always!
For you, who I dearly love,
are my Mother,
amen.

And she will help you,
to keep it pure and to follow the
way to which God has called you.
(Friends of God, 180) 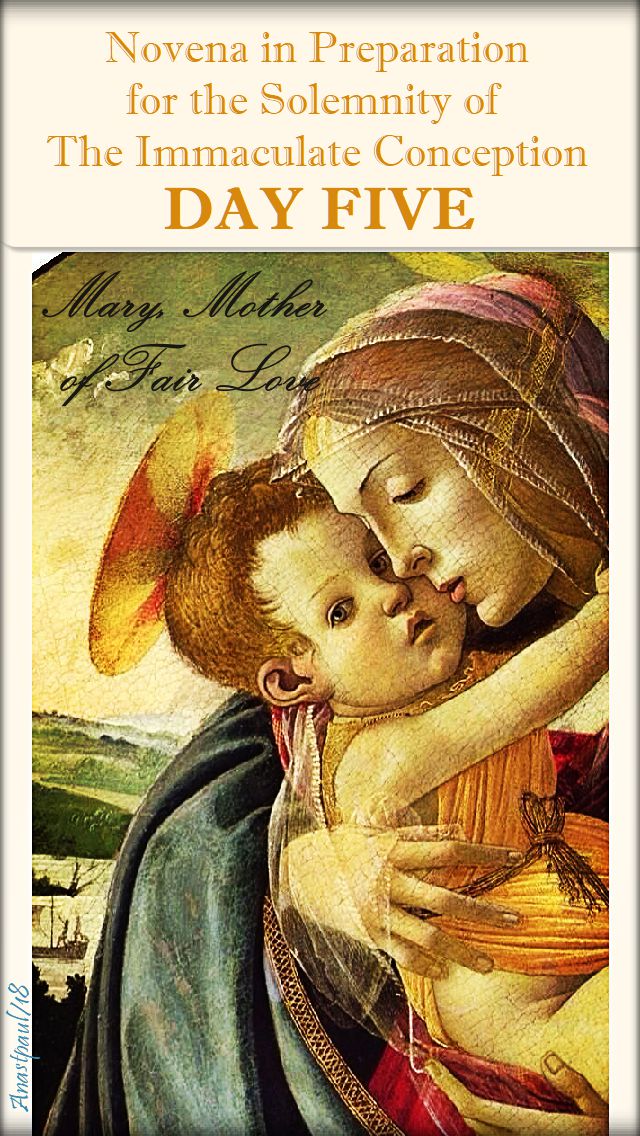 Eastern Orthodox Christians and Eastern Catholics, whose tradition has been particularly shaped by his insights, celebrate the saint’s feast on the same day as the Roman Catholic Church.   Among Eastern Christians, St John (676-749) is best known for his defence of Christian sacred art, particularly in the form of icons.   While the churches of Rome and Constantinople were still united during St John’s life, the Byzantine Emperor Leo III broke radically from the ancient tradition of the church, charging that the veneration of Christian icons was a form of idolatry.

Saint John was born in the late 7th century and is the most remarkable of the Greek writers of the 8th century.   His father was a civil authority who was Christian amid the Saracens of Damascus, whose caliph made him his minister.   This enlightened man found in the public square one day, amid a group of sad Christian captives, a priest of Italian origin who had been condemned to slavery, he ransomed him and assigned him to his young son to be his tutor.   Young John made extraordinary progress in grammar, dialectic, mathematics, music, poetry, astronomy but above all in theology, the discipline imparting knowledge of God.   John became famous for his encyclopedic knowledge and theological method, later a source of inspiration to Saint Thomas Aquinas.

During the 720s, the upstart theologian began publicly opposing the emperor’s command against sacred images in a series of writings.   The heart of his argument was twofold – first, that Christians did not actually worship images but rather, through them they worshipped God, and honoured the memory of the saints.   Second, he asserted that by taking an incarnate physical form, Christ had given warrant to the Church’s depiction of Him in images. 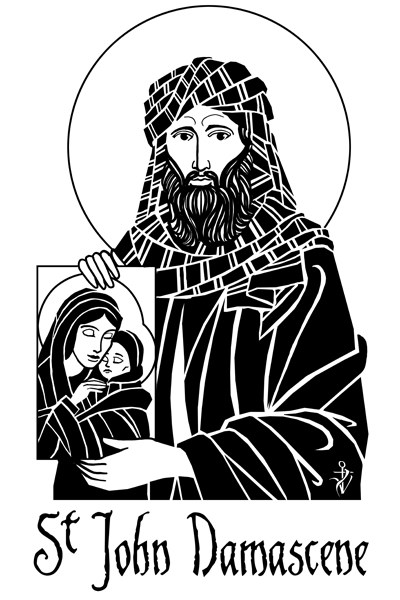 By 730, the young public official’s persistent defence of Christian artwork had made him a permanent enemy of the emperor, who had a letter forged in John’s name offering to betray the Muslim government of Damascus.   The ruling caliph of the city, taken in by the forgery, is said to have cut off John’s hand.   The saint’s sole surviving biography states that the Virgin Mary acted to restore it miraculously.   John eventually managed to convince the Muslim ruler of his innocence, before making the decision to become a monk and later a priest.

Although a number of imperially-convened synods condemned John’s advocacy of Christian iconography, the Roman church always regarded his position as a defence of apostolic tradition.   Years after the priest and monk died, the Seventh Ecumenical Council vindicated his orthodoxy and ensured the permanent place of holy images in both Eastern and Western Christian piety. 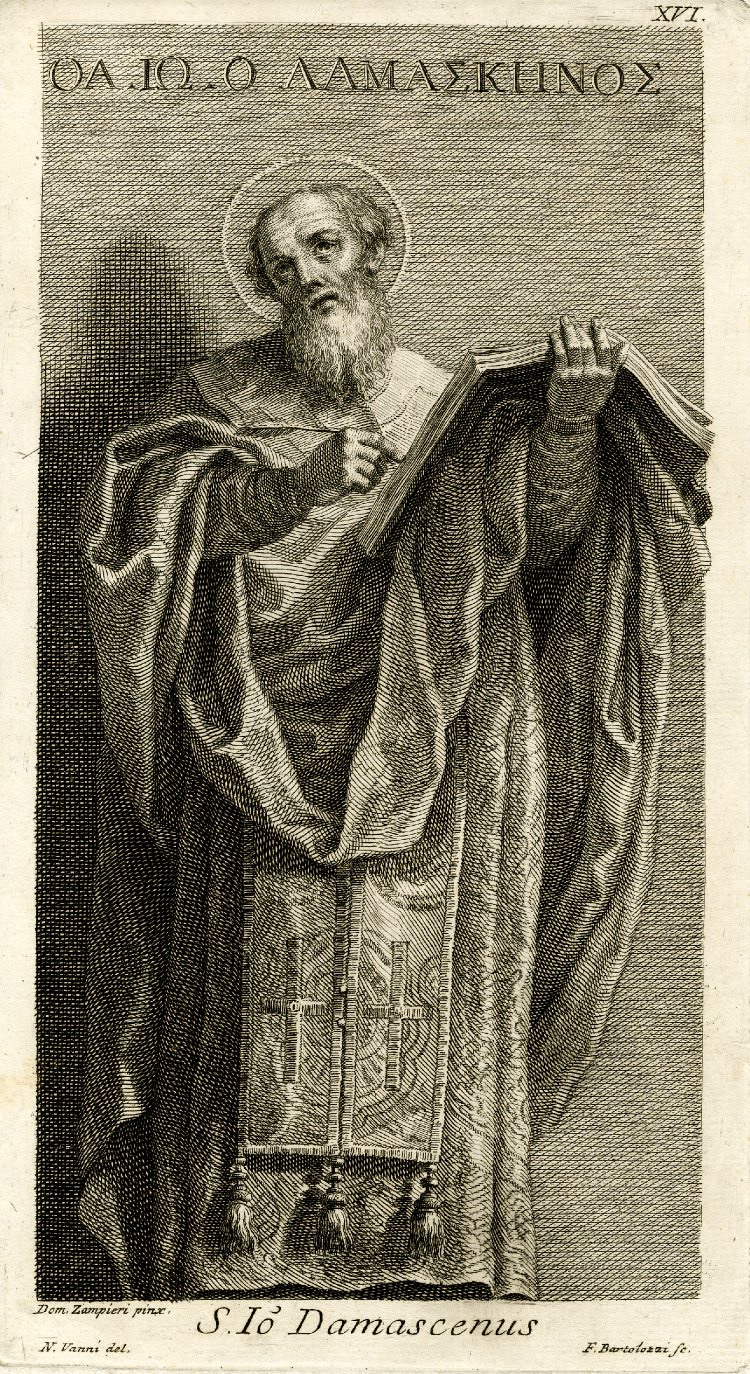 St John Damascene’s other notable achievements include the “Exact Exposition of the Orthodox Faith,” a work in which he systematised the earlier Greek Fathers’ thinking about theological truths in light of philosophy.   The work exerted a profound influence on St Thomas Aquinas and subsequent scholastic theologians.   Centuries later, St John’s sermons on the Virgin Mary’s bodily assumption into heaven were cited in Pope Pius XII’s dogmatic definition on the subject.

The saint also contributed as an author and editor, to some of the liturgical hymns and poetry that Eastern Orthodox and Eastern Catholics still use in their celebrations of the liturgy.

“Show me the icons that you venerate, that I may be able to understand your faith.” – Saint John of Damascus. 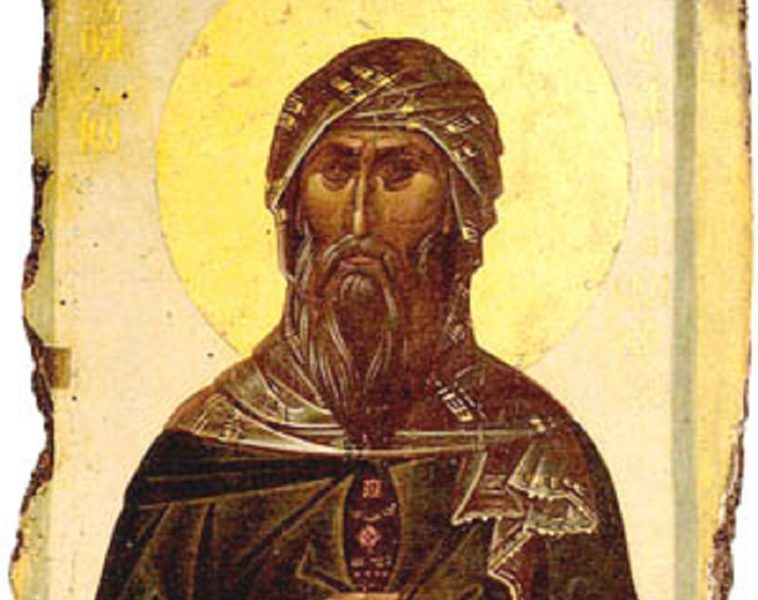